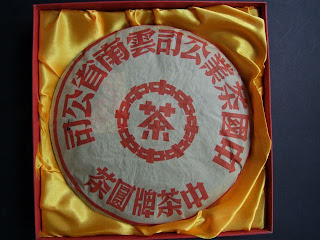 Was reading the local newspaper article today and there was this article about pu erh tea:
MENGHAI, China — Saudi Arabia has its oil. South Africa has its diamonds. And here in China’s temperate southwest, prosperity has come from the scrubby green tea trees that blanket the mountains of fabled Menghai County.
Over the past decade, as the nation went wild for the region’s brand of tea, known as Pu’er, farmers bought minivans, manufacturers became millionaires and Chinese citizens plowed their savings into black bricks of compacted Pu’er.
But that was before the collapse of the tea market turned thousands of farmers and dealers into paupers and provided the nation with a very pungent lesson about gullibility, greed and the perils of the speculative bubble. “Most of us are ruined,” said Fu Wei, 43, one of the few tea traders to survive the implosion of the Pu’er market. “A lot of people behaved like idiots.”
A pleasantly aromatic beverage that promoters claim reduces cholesterol and cures hangovers, Pu’er became the darling of the sipping classes in recent years as this nation’s nouveaux riches embraced a distinctly Chinese way to display their wealth, and invest their savings. From 1999 to 2007, the price of Pu’er, a fermented brew invented by Tang Dynasty traders, increased tenfold, to a high of $150 a pound for the finest aged Pu’er, before tumbling far below its preboom levels.
For tens of thousands of wholesalers, farmers and other Chinese citizens who poured their money into compressed disks of tea leaves, the crash of the Pu’er market has been nothing short of disastrous. Many investors were led to believe that Pu’er prices could only go up.
“The saying around here was ‘It’s better to save Pu’er than to save money,’ ” said Wang Ruoyu, a longtime dealer in Xishuangbanna, the lush, tea-growing region of Yunnan Province that abuts the Burmese border. “Everyone thought they were going to get rich.”
Fermented tea was hardly the only caffeinated investment frenzy that swept China during its boom years. The urban middle class speculated mainly in stock and real estate, pushing prices to stratospheric levels before exports slumped, growth slowed and hundreds of billions of dollars in paper profits disappeared over the past year.
In the mountainous Pu’er belt of Yunnan, a cabal of manipulative buyers cornered the tea market and drove prices to record levels, giving some farmers and county traders a taste of the country’s bubble — and its bitter aftermath.
At least a third of the 3,000 tea manufacturers and merchants have called it quits in recent months. Farmers have begun replacing newly planted tea trees with more nourishing — and now, more lucrative — staples like corn and rice. Here in Menghai, the newly opened six-story emporium built to house hundreds of buyers and bundlers is a very lonely place.
“Very few of us survived,” said Mr. Fu, 43, among the few tea traders brave enough to open a business in the complex, which is nearly empty. He sat in the concrete hull of his shop, which he cannot afford to complete, and cobwebs covered his shelf of treasured Pu’er cakes.
All around him, sitting on unsold sacks of tea, were idled farmers and merchants who bided their time playing cards, chain smoking and, of course, drinking endless cups of tea.
The rise and fall of Pu’er partly reflects the lack of investment opportunities and government oversight in rural Yunnan, as well as the abundance of cash among connoisseurs in the big cities.
Wu Xiduan, secretary general of the China Tea Marketing Association, said many naïve investors had been taken in by the frenzied atmosphere, largely whipped up by out-of-town wholesalers who promoted Pu’er as drinkable gold and then bought up as much as they could, sometimes paying up to 30 percent more than in the previous year.
He said that as farmers planted more tea, production doubled from 2006 to 2007, to 100,000 tons. In the final free-for-all months, some producers shipped their tea to Yunnan from other provinces, labeled it Pu’er, and then enjoyed huge markups.
When values hit absurd levels last spring, the buyers unloaded their stocks and disappeared.
“The market was sensationalized on purpose,” Mr. Wu said, speaking in a telephone interview from Beijing.

With its near-mythic aura, Pu’er is well suited for hucksterism. A favorite of emperors and imbued with vague medicinal powers, Pu’er was supposedly invented by eighth-century horseback traders who compressed the tea leaves into cakes for easier transport. Unlike other types of tea, which are consumed not long after harvest, Pu’er tastes better with age. Prized vintages from the 19th century have sold for thousands of dollars a wedge.

Over the past decade, the industry has been shaped in ways that mirror the Western fetishization of wine. Sellers charge a premium for batches picked from older plants or, even better, from “wild tea” trees that have survived the deforestation that scars much of the region. Enthusiasts talk about oxidation levels, loose-leaf versus compacted and whether the tea was harvested in the spring or the summer. (Spring tea, many believe, is more flavorful.)
But with no empirical way to establish a tea’s provenance, many buyers are easily duped.
“If you study Pu’er your whole life, you still can’t recognize the differences in the teas,” said Mr. Wang, the tea buyer. “I tell people to just buy what tastes good and don’t worry about anything else.”
Among those most bruised by the crash are the farmers of Menghai County. Many had never experienced the kind of prosperity common in China’s cities. Villagers built two-story brick homes, equipped them with televisions and refrigerators and sent their children to schools in the district capital. Flush with cash, scores of elderly residents made their first trips to Beijing.
“Everyone was wearing designer labels,” said Zhelu, 22, a farmer who is a member of the region’s Hani minority and uses only one name. “A lot of people bought cars, but now we can’t afford gas so we just park them.”
Last week, dozens of vibrantly dressed women from Xinlu sat on the side of the highway hawking their excess tea. There were few takers. The going rate, about $3 a pound for medium-grade Pu’er, was less than a tenth of the peak price. The women said that during the boom years, tea traders from Guangdong Province would come to their village and buy up everyone’s harvest. But last year, they simply stopped showing up.
Back at Menghai’s forlorn “tea city,” Chen Li was surrounded by what he said was $580,000 worth of product he bought before the crash. As he served an amber-hued seven-year-old variety, he described the manic days before Pu’er went bust. Out-of-towners packed hotels and restaurants. Local banks, besieged by customers, were forced to halve the maximum withdrawal limit.
“People had to stand in line for four or five hours to get the money from the bank, and you could often see people quarreling,” he said. “Even pedicab drivers were carrying tea samples and looking for clients on the street.”
A trader who jumped into the business three years ago, Mr. Chen survives by offsetting his losses with profits from a restaurant his family owns in Alabama. He also happens to be one of the few optimists in town. Now that so many farmers have stopped picking tea, he is confident that prices will eventually rebound. As for the mounds of unsold tea that nearly enveloped him?
“The best thing about Pu’er,” he said with a showman’s smile, “is that the longer you keep it, the more valuable it gets.” (NYT)
Posted by wilson at 10:58 PM