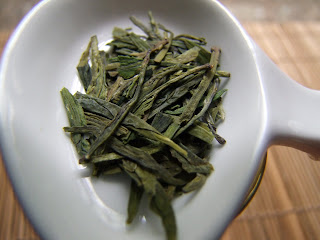 Longjing tea, a green tea, is a very famous tea and is primarily grown in Hangzhou/ suzhou districts.  These leaves are handpicked and then pan fried by hand.  Longjing translates to "dragon well" is considered a high premium tea in China and is highly regarded by green tea drinkers throughout the world.

Good quality longjing tea is very expensive.  I had just purchased  a Hangzhou tea factory 600g pack for US$160 (april 2009 harvest).  This I was told was about 2nd/3rd grade  as higher grades were not allowed for sale.  A pinchful of tea (about 15-20 leaves) can make  a 200ml cup of tea.  Good for 3 infusions, 2nd infusion tastes the best. (do not use boiling water, let boiling water cool for a minute before pouring).  I find the taste refreshing and light with a hint of flowers, with a sweet aftertaste.   The tea does put a smile on my face after I had finished a cup.  I was told the leaves after brewing are edible and some locals in China even use these leaves when making an egg omelette.

In the book “Chinese Tea” by Liu Tong, the author retells a story about longjing tea : “When Emperor Qianlong went to the south, he went to the West Lake district to have a drink of the longjing tea.  Seeing the skillfulness of the tea picking girls, he couldn’t help getting interested and started learning to pick.  Just then, some attendants hurried along to announce that the Queen mother was ill.  Carelessly putting the newly picked leaves in his sleeves, Qianlong returned to Beijing.  The Queen mother had nothing serious, just a little indigestion, plus missing her son.  She noticed that gusts of fragrance came out of Qianlong and asked why.  Only then did the emperor remember the leaves in his sleeve.  He took them out and made tea with them.  The tea was sweet, strong and tasteful, curing the mother’s ailment at once.  Qianlong was so pleased he gave orders that the 18 tea trees in front of longjing temple be named “royal tea”……because the leaves that Qianlong took back to Beijing was pressed flat in his sleeve, the later leaves were all made into that shape.”

The author suggested using a clear tall glass to make this tea.  When pouring the water into the glass he suggest, while pouring to raise and lower the pot three times (this method is called Phoenix nods 3 times).  This is to ensure the leaves have thorough contact with the water and at the same time shows the respect for both the guest and tea ceremony.

Overall conclusion I have on this tea is that even though the tea sounds expensive for a 600g bag…. the number of brews may make it actually quite reasonable in terms of price per brew.  This is a high quality green tea which I have enjoyed.  The taste is uniquely refreshing and making the tea also gives me visual enjoyment; watching the leaves float and then sink. The aftertaste is very pleasant with a lingering fresh floral scent.   For the new tea drinker to this tea…..please try out the tea (to make sure you like the tea) or purchase tea samples before you commit to a high price tea purchase.