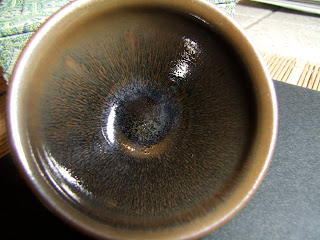 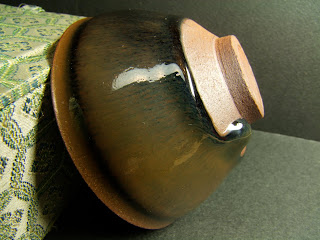 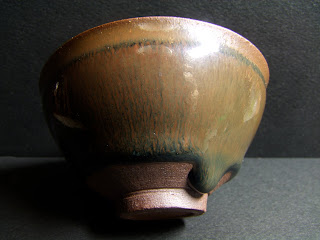 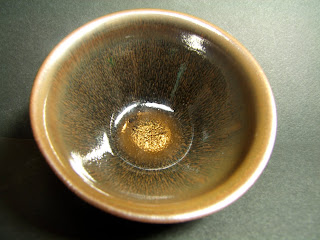 I have bought myself a tea bowl.  This is a rabbit hair teabowl.  Measuring about 9cm (3.5 inches) in diameter, this teabowl is commonly known as Jian ware.  The Japanese version of such pottery is known as Temmoko.

Encyclopedia Britannica aptly describe this pottery as “The clay used for Jian ware was of a very hard, coarse grain. The inside and about two-thirds of the outside of the ware were covered with a thick, very dark glaze (coloured with iron oxide). This glaze usually stopped short of the outer base in a thick welt; it also tended to pool thickly on the inside of the vessel. Within a limited palette dominated by a purplish or bluish black or reddish brown, Jian ware had a range of variations. The most prized glazes resembled the streaking of a hare’s fur, the mottling of partridge markings, or the silvery splattering of oil spots."

The Chinese tea culture online museum explained "In the Song Dynasty the tea competition was a popular game. The drinkers liked to use dark colors to emphasize the white tea soup. Rabbit-hair bowl was one of the favorite equipment.  The most famous producer of the rabbit-hair bowl was the Jian Kiln located in Jianyang, Fujian Province.  The Jian Kiln was famous for its black glaze porcelains. Ferric oxide was the element responsible for the black color of the glaze. Under the high temperature, some of the iron was released into the glaze and tiny bubbles were generated in the glaze around the iron atoms. When the temperature was as high as 1300oC, the iron atoms flew in the glaze in straight lines. When it was cold there was hair like crystals inside the glaze, looked like the hair of a rabbit. This was called the rabbit-hair glaze. "

“The Jian ware temmoku tea bowls of Fujian Province have long been appreciated in Japan; indeed, the term temmoku itself is derived from the Japanese pronunciation of the Chinese Tianmu Shan, a mountain where, according to tradition, Japanese Buddhist priests visited a Buddhist temple and acquired some of these bowls to take back to Japan. The Jian tea bowls are fairly uniform in potting, with dark, coarse-grained stoneware bodies and lustrous bluish black or brownish black glazes that generally are shot through with brownish streaks likened to "hare's fur." Occasionally, as in this fine bowl, the glaze exhibits a multicolor surface iridescence as light plays across it.” (quoted from cultural-china.com)

This tea bowl I had purchased is a new bowl, not an antique.  You can see from the pix (please click pix for enlarged views) that the glaze that was applied on the bowl is very thick.  I was fascinated with this bowl as there was a “drip” like effect as seen from the bowl, in that the a bit of the glaze is flowing down and was solidified.  Taking pictures of this bowl was very challenging.  I has to use artificial lighting and power on the flash to capture the fine “rabbit hair” lines on the bowl.  As a result the tea bowl appears "orangey" than dark.  The bowl reflects light very well.  Another highlight of this bowl is that once the bowl is “warmed up”, it keeps the tea warm for a longer time compared to other types of tea bowls/cups.  Perhaps tea drinkers there like such Jian ware as it kept their tea warm during the cold weather.