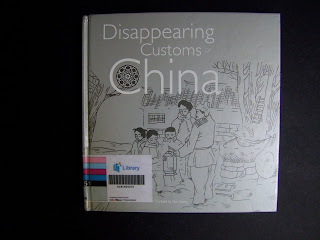 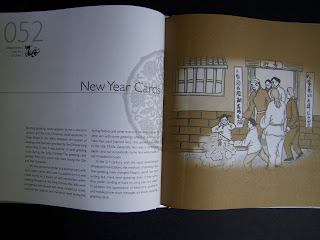 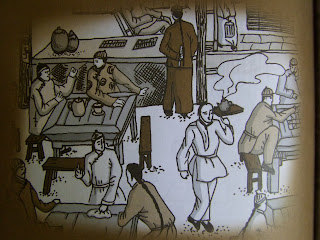 Written by Qi Dongye and published by Marshall Cavendish, this 2007 book examines many Chinese customs that is getting less practiced with time in modern China.
The Chinese customs listed in this book, according to the author was passed down from many generations and are not practiced and used frequently. The author thinks that they may, in time, "form memories and evoke a sense of nostalgia".
In this book, the author described these customs and a sketch was used to illustrate the practice of these customs. Some listed customs include new year sweeping, lantern festival, staying up all night on lunar new year's eve and new year cards. There were some customs which I myself am unaware of; like cold food festival and paper cutting for window decoration.
One of the customs listed is Chinese teahouses which the author thinks will disappear with time. He describes:
"Enjoying tea has long been a tradition in Chinese society and where there is tea, there will bve tea houses. .......Tea houses in the south were more interesting and could be found along every street. Each teahouse came with its own gardens, pavilions and yards. In terms of furnishing used, the chairs and tables were made from bamboo and the chairs came with backrests. Another notable point was that the teahouses were very particular in the choice of water and tealeaves used in brewing tea. In those days, water was purified by a simple filter of palm leaves and sand placed at the bottom of the water storage urn. After filtering, the water would be poured into a pot and boiled. The tealeaves were fresh and came in a wide variety to suit the different taste buds of customers. Teahouses were not just a place for enjoying tea. They were like great melting pots where people from all walks of life gathered and socialised. Peddlars also came to the teahouses to sell their wares as did minstrels, fortune tellers and other entertainers. As the teahouses were public venues patronised by all manner of questionable characters, it was definitely the centre of social life then."
My opinion is that we are living in a fast paced society characterized by a fast food and quick solution mentality. Do make time to invite a friend or two next time you brew a pot of tea......the tea will taste better.