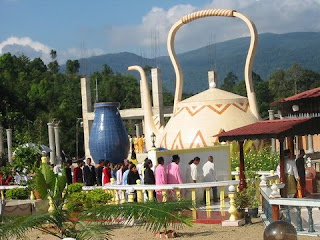 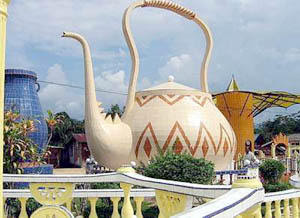 Since my last couple of blogs was on teapots, this news about teapot worshipping makes an interesting read.
This article is from Telegraph.co.uk, written by Thomas Bell 4 Mar 2008.

"A sharia court in Malaysia jailed a woman for joining a "tea-pot worshipping" cult. Kamariah Ali, a 57 year old former teacher, was arrested in 2005 when the government of the Muslim majority country demolished the two storey high sacred tea pot and other infrastructure of the "heretical" Sky Kingdom cult. For the eccentric sect, which emphasised ecumenical dialogue between religions, the tea pot symbolized the purity of water and "love pouring from heaven".

But in Malaysia, despite constitutional guarantees of freedom of worship, born

Muslims such as Mrs Ali are forbidden from converting to other religions."

So the next time you hold a teapot in your hand, think of the many things you can do to the teapot.

I realize this is an old post, but holy crap! (So to speak.) More than half a century ago, Bertrand Russell happened to use "teapot worship" as a hypothetical absurd-yet-undisprovable claim.

This is from "Is There a God?", 1952: "Many orthodox people speak as though it were the business of skeptics to disprove received dogmas rather than of dogmatists to prove them. This is, of course, a mistake. It I were to suggest that between the Earth and Mars there is a china teapot revolving about the sun in an elliptical orbit, nobody would be able to disprove my assertion provided I were careful to add that the teapot is too small to be revealed even by our most powerful telescopes. But if I were to go on to say that, since my assertion cannot be disproved, it is intolerable presumption on the part of human reason to doubt it, I should rightly be thought to be talking nonsense. If, however, the existence of such a teapot were affirmed in ancient books, taught as the sacred truth every Sunday, and instilled into the minds of children at school, hesitation to believe in its existence would become a mark of eccentricity and entitle the doubter to the attentions of the psychiatrist in an enlightened age or of the Inquisitor in an earlier time."