How much did you spend on tea? 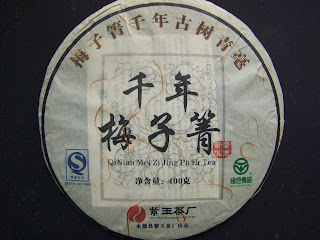 A news article from the Wall Street Journal, 23 Sept 2010 by Josh Chin:

Some in China claim to have the tonic for your investment blues.

In a new special report(transcript in Chinese), China’s state broadcaster CCTV delves into the stunning rise of dahongpao, a once obscure tea from the southern coastal province of Fujian that has suddenly become one of the country’s hottest commodities. Literally.

Since the middle of last year, the report says, prices of certain types of dahongpao have increased tenfold. According to one expert interviewed by CCTV, the wholesale price for mid-range varieties of the tea has risen from between 200 and 400 yuan to around 4,000 yuan per kilogram, with retail prices reaching 20,000 yuan or more. CCTV found one retail shop in the Fujian city of Xiamen that claimed to be selling one variety for 200,000 yuan, or roughly $30,000, per kilogram.

“I never thought it would get so expensive,” CCTV quotes tea producer Wu Zongyan as saying. “It’s one price one day, another price another day. Between when we pick the leaves and when it’s ready to sell, the price has already gone up.”

The dahongpao phenomenon mirrors in exaggerated form the burgeoning demand in China for high-end French wines. In both cases, high prices suggest buyers aren’t in it for the sipping pleasure but instead are purchasing the beverages as an investment.

Strange as it may sound, this isn’t the first time Chinese tea prices have gone stratospheric. A few years ago, puer, a smoky-tasting tea from Yunnan Province typically pressed into saucer-sized cakes for storage, underwent a similar transformation from tea-lover’s fetish to luxury-grade investment. Prices for some puer cakes reached the tens of thousands of dollars before crashing back to earth in 2008.

The attraction of dahongpao, a form of Oolong, is its rarity. Grown only in a small mountainous area in the Fujian interior, all genuine dahongpao is said to come from cuttings of a handful of trees originally planted to provide tea for the imperial family during the Ming Dynasty (1368-1644 A.D.).

CCTV explains the dahongpao craze as a reaction to uncertainty over real estate and stocks, among the only traditional investment outlets available to the average person in China. To meet demand, the report says, exclusive dahongpao shops have been multiplying across Fujian—from 200 to more than 1,500 in the town, Wuyi, where the tea is produced—while fake dahongpao has begun to flood the market. But in a bad sign for would-be investors, CCTV finds many of the new retailers losing money, unable to unload their more expensive tins.

In other words, this particular tea party may not be going on much longer."