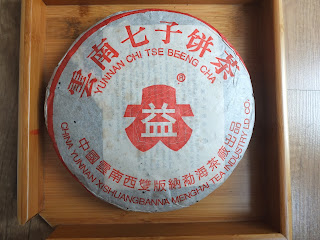 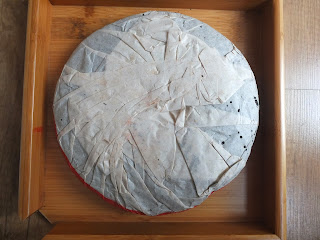 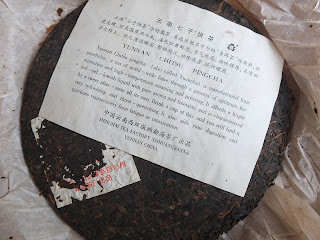 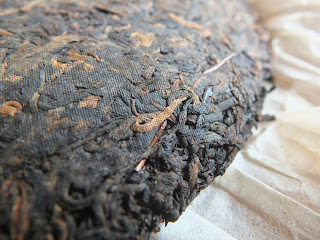 I opened a 2004 Menghai Tea Industry 7572 cake 2 weeks ago.  Menghai Tea Industry is commonly known as Dayi or Taetea, and this tea factory has become one of the biggest producer of Yunnan pu erh tea.  In recent years, Dayi tea has launched a major marketing campaign that saw the brand being advertised all over China through TV media, magazines and even the recent Olympics games held not too long ago in Beijing.

Unlike wine which has names to describe a blend or a place where the wine was made (examples - Cabernet Sauvignon, Pinot Noir, Merlot), pu erh tea is commonly identified by a 4 digit number as in this case 7572.  I have noticed that tea factories today sometimes sell their tea by the region the tea were harvest.  If the pu erh tea is harvested in Bulang mountain in Yunnan, the tea may simply indicate Bulang pu erh tea instead.

Sound confusing?  Do not worry.  Simply sample a tea you want to purchase while at the teashop.  If you like the tea, it is a good tea.

Back to this 7572.  I like this tea.  Strong aromatic wood and herb scent combine with a hint of sweetness in the aftertaste makes this tea, to me a good tea.  The 10 year 'storage' had also make this tea very mellow making it a wonderful tea to have especially after dinner.  I like to brew this tea extra strong as I enjoy the strong taste and aroma of this tea.  A wee bit expensive with prices for this 2004 cake around 500rmb when I post this blog entry.  I would still recommend a 'buy' at this price levels if you do like the older 7572.

Wilson, do you think shu puerh improves much with age?

Dear Wilson, I have a similar piece that i received as a gift some years ago. Since there is no date to be found anywhere (note even the formula code), how do you know which year and type? Thank you.

Thank you for the comments. Hektor, my next blog is a direct response to your question.
SYMP, I have checked with a teashop that has been around for 20 years and they tell me that older cakes before 2005 (thereabouts) like Dayi, CNNP or zhong cha labels do not have the recipe numbers on the tea cake wrapper. The numbers are usually found on the outer carton or carton ticket that accompanies the box of cakes. In addition, wrappers also do not indicate raw or ripe, so shops will normally mark either raw or ripe with a chop mark. My teashop friend has a 'green' chop for raw pu. This may also indicate that tea drinkers during 2005 or earlier, just buy pu erh tea raw or ripe, and recipe numbers may be less critical.... or may indicate 7572 (ripe) and 7542 (raw) are normally the cakes sold in these instances.

There are also no 'year of manufacture' printed on the tea wrappers for such cakes. You would have to reference Dayi year books to compare wrappers on the photos and ascertain the year. You may also bring your cake to an authorised Dayi tea dealer who may shed some light to your quest.