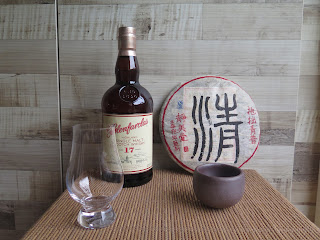 I have been exchanging emails with Wilson.  No I am not going bonkers.  Since my alcoholic post last month, many readers now know that I enjoy drinking many other liquids besides Chinese tea.  I grind my Ethiopia coffee beans on weekends for morning coffee and I do drink a dram of whisky 2-3 times a month.

A Scotsman named Wilson (its really weird writing to myself) wrote to me last month.  He enjoys his pu erh tea and his scotch drinks and wanted to compare tea notes with me.  At the same time, he explained to me the proper way to drink and appreciate scotch whisky.

Here are some notes that will interest the Chinese tea drinker:

1.  Scotch Whisky does not age in the bottle.  You buy a 12 yr old scotch, the taste and aroma of the liquor will (should) remain unchanged in the bottle after say 10 years.  Pu erh tea will continue to age after you bring it home.  A 10 yr old pu erh cake will be aged to a 20 year old tea if you keep it for another 10 years.

3.  You can have a tea session daily.  Or twice daily.  But having a double whisky session daily may not be good and may cause an unhealthy addiction.

But Wilson (the Scottish One) pointed out other differences

1.  Tea set up can be expensive.  Tea kettle, tea tray, teapot and teacups can be a little expensive.  You need to boil water and you have to prepare and later wash up the utensils.  However, all you need is a good nosing glass for your whisky and a few drops of water to bring up the flavours in the glass.  It takes less effort.

2.  You can walk into a whisky bar and have a choice of 50-200 varieties of different age and character.  I answered him by saying I can walk into a teashop and sample (for free) a tea as well.

Scottish Wilson explained that nosing of the whisky is very important.  He pointed out that a good nosing glass like the Glencairn glass in the pix, is tulip shaped that will encapsulate the aroma of the liquor.  He says nosing of whisky normally takes 5-15 min as one try to identify the scents and aroma of the whisky.....floral, sweet honey notes, wooden oak or sherry scents.  Yes...even smoky or scent of the sea are seen in some whiskies.  Then sipping a whisky and 'chewing' the sip to cover the whole mouth before swallowing is also carried to to maximise the aroma and flavour.

As a Chinese tea drinker, you will notice some of the similarities in whisky and tea appreciation.  Nosing for Chinese tea take up only a few seconds as the teacup we normally use does not hold the tea aroma well.  There was a significant improvement when I used a deeper Lin Ceramics teacup, filling half the cup with tea and nosing the tea for about 30 seconds before drinking the tea.  I feel that Chinese tea appreciation could be made more interesting if we a proper nosing cup of the tea.  Yes, we have scenting Chinese tea cups but I feel a bigger and deeper cup where you can 'put your nose in' makes a significant difference.  And I am not drunk stating this....whisky taste aroma and taste seem enhanced if drank from a Lin purion cup.

That is my 2 cents worth of thoughts.  I have been invited to Scotland where Wilson will bring me to a few distilleries and bars.  He proposed we do an tea-whisky exchange.  Sounds good...... but I have to put the bottle In my checked-in luggage and hope it will not break during the return journey.   My wife is excited when I told her we may be visiting Scotland.  I left out the distillery and bar visit bits though.

Nice post, thanks a lot! I used to drink Single Malts, too, but I find the effect of Alcohol quite unpleasant :( But luckily, tea provides in many ways a similar sensual experience, especially middle-aged Sheng can go in quite a similar direction than many single malts.

With one exception: so far, I haven't hat many smokey teas which have been really good - a shame, I love Talisker and Islay whiskeys. In a sense, teas with rather punchy bitterness like Bulang teas are the thing that come closest for me.

And whiskey has a (small) advantage over tea in that it can be drunk in the evening, good news for people sensitive caffeine. Of course, one should mention that alcohol can reduce the quality of sleep, too.

Your post gave me an idea: I'll warm up a whiskey glass and sniff some tea in that :)