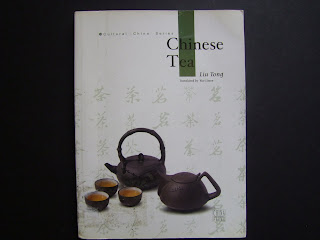 There are not many books written on chinese tea in English.  I do, at times, get that odd look when I walked into a bookstore and asked about books on chinese tea.  Well I manage to get my hands on a few books and will discuss the merits of such books.
"Tea and Chinese Culture" by Ling Wang offers a fascinating assessment of the historical and cultural significance of chinese tea.  The book delves on tea in China's history and how tea had its position to the chinese religon, philosophy, art and imperial tea culture.  This book is beautifully lavished with lots of pictures especially old paintings with relation to tea.  I have extracted a few lines on how tea played a part with chinese funerals - "It was widely believed in china that ghosts in the netherworld would compel a person who had just died to drink a magic potion to make him forget all the past on earth, or lead him into a maze so that the ghosts could humiliate and enslave him.  the chinese believed that one should be reasonable and sober, and it was unwise to drink the magic potion.  Tea could help people keep a clear head.  So tea became an important component part in funeral customs in many tea producing areas.  According to the Records of Chinese customs, people in Zhejiang Province and some other areas believed that"besides a silver  ingot, the family of the deceased should put a ball made of mannan leaves in his mouth, and a pack of tea in his hand so that he could not be filled with the magic potion."
The second book, entitled "Chinese Tea" is by Liu Tong.  Originally written in chinese, it was translated into English which became part of a cultural china series which has similar books that covers chinese festivals, foods, clothings etc where chinese tea is one of the books.  This book serves to introduce the reader to chinese tea; history of tea, types of tea. customs and culture related to chinese tea.  The strength of the book, I think was on the introduction on the various types of tea, how they process these teas as well as the interesting history or stories behind the discoveries of the teas.   I have extracted the closing lines of this book which I find extremely thought provoking:
"Various kinds of tea can respond to various phases of life.  In Adolesence, people are like green tea, immature and simple.  They don't know much but start to understand.  They are still natural and this naturalness is displayed in every movement.  Although not too strong in flavor, they are pure and lovely upon careful savoring.
In youth, people are like flower tea, in their flowery years with flowery scent and flowery dreams.  Countless possibilities are in store for them.  Whatever we add to the tea - jasmine, sweet scented osmanthus or rose, this cup of tea is always redolent, admirable and appealing.
In middle age, people are like black tea, salmon in color and full of aroma.  They are not as clear and fresh as green tea, but they have a mature charm of their own.
In old age, people are like Pu'er tea, the older the better.  Filled With all kinds of stories, elder people minutely represent traces of age.  Though dry, old and thin in appearances, they are very intense and mellow in taste, able to stand up to repeated appreciation."
Posted by wilson at 10:38 AM