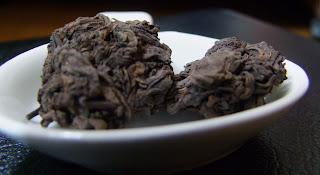 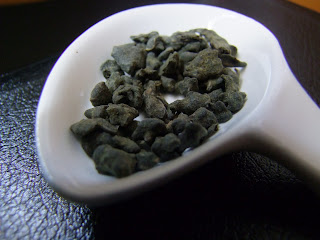 Lao Cha tou is a ripe pu erh tea.  Yunnan Sourcing describes the tea as "Cha Tou is a type of compressed nugget that is the by product of fermenting Pu-erh tea. At the end of the 40+ day fermentation process (where the Pu-erh tea is fermented unto itself), the tea is fed into a wind-blowing sorter that sorts the tea according to its size (grade). The cha tou is found near the bottom of the pile of Pu-erh and is formed as a result of heat and relatively high compression.  "Lao Cha Tou" translates roughly to: old tea nugget. The resulting flavor is smooth and never bitter, with a a fair amount of sweetness. This tea can be infused many times but requires the hottest water possible."
A tea book written in chinese, describes this tea as "after the fermented ripe tea has been sorted by the machine (wind sorted), there will be some tea remaining n the machine as some tea leaves had lumped together and is too heavy to be sorted out by the wind machine.  The author mentioned that these lumps of tea are fermented ripe tea on the outside with some tea leaves inside the lumps remaining unfermented (raw).  This gives rise to a sweetish combination of ripe/raw tea when brewed.  My trip to Yunnan made me realised that lao cha tou is a popular tea among the tea drinkers in the city.  These drinkers informed me that there are good grade lao cha tou.  I gather that the grading would depend on the quality of the tea leaves, the fermentation process and the age of the tea.  I enjoy this tea very much.  It is an excellent drink, cheap and can make more than 15 infusions easily.
Just for information, Yunnan Sourcing sells the haiwan and menghai lao cha tou.  I mentioned this source as there are not many tea shops or vendors on the internet selling this tea.
The second pix shows a tea I had purchased in Yunnan in easter April '09.      This shop tells me this tea is raw pu erh called "pu erh wang".  The appearance looks like ginseng oolong (see my april 6 blog).  It even taste similar to the ginseng oolong.  The tea merchant insist that it is raw pu erh that is hand rolled and nothing had been added to the tea or during the tea process.  I have examined the leaves and can confirmed its pu erh tea leaves.  I have gave a sample to my expert tea friends for their opinion and will let the results be known soon.  Meanwhile......I have a kilo of both these teas for my enjoyment.