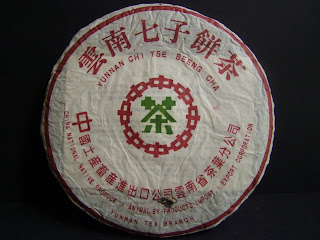 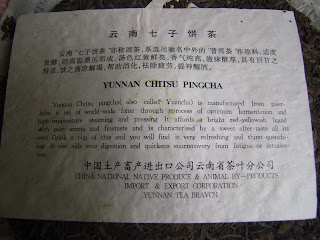 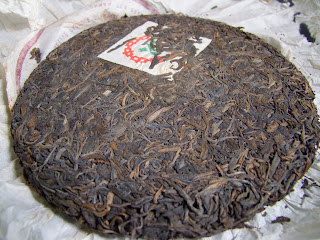 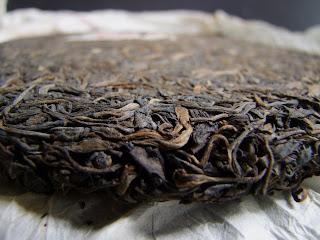 The 1st pix shows an imitation (fake) pu erh wrapper.  This means that there is no such CNNP wrapper being used and sold as raw pu erh in the 1990s.

It was inevitable that I will be “caught” one day with a purchase of pu erh that was not the real thing.  Let me explain.  My friend had purchased this teacake from a teashop and gave me a sample of the cake.  He informed me that it’s a wet stored pu erh from the late 90s.  I tried the sample and found the taste of the pu erh tea to be a pleasant aged one.  The tea leaves appeared normal and  I went to this shop and got myself a cake.

I took this cake to my regular teashop for a “bragging” session (to show off my latest “wow” purchase).  A pot of this tea was brewed and a tea drinker there found the tea good.  However, the tea manager there, upon tasting, immediately commented, that this is a raw pu erh that had gone through accelerated high humidity aging, and that this wrapper was not an authentic wrapper, only made to wrapped this quick aged pu cake and to sell to unsuspecting buyers as aged CNNP raw pu.  Accelerated aging of pu erh meant that the pu erh is exposed to a high humidity environment for the purpose of quick fermentation.  This process sometimes known as “wet stored” pu erh, helps raw pu erh ferment quickly so the tea will have a aged sensation taste.   The manager also remarked that this taste of accelerated pu used to be very popular with Hong Kong drinkers some years ago.

My Penang teamaster friend (Eric) upon receiving my pictures of this pu provided these astute comments : “It's an imitation wrapper. I also noticed that the 中 character is larger than the rest……. Also take a look at the 雲 character on the wrapper and the 云 character on the inner ticket of your Pu. Both are different! I've attached a picture of the CNNP Simplified "Yuen" from the mid 90s for you to compare. Both versions of the “yun” has to be the same. The paper used as the wrapper also doesn't resemble any from the 90s that were from CNNP. The printed characters appear to be bold and dark. This printing method is found only from 2000 onwards. All pre 2000 prints are thin and sharp. Finally, the 國 character should be in a proper square, not rectangle. “

Well, I conclude from these findings that this is a fake CNNP wrapper, which also strongly indicates that this pu erh is not from CNNP either.  The pu erh tea is real though.  Taste is not unpleasant…an aged sensation taste.  The aroma of the brewed tea is also good but it may be that the pu erh tea was exposed to certain scents during the fermentation process to achieve this final scent.  The question here is whether the tea was in a safe and hygienic environment while it is aging and whether there was any physical tempering to the cake.  I disposed the pu erh cake in the garbage after posting this blog.

It is very important to know your tea and buy your tea from reliable sources to minimize the chances of a bad purchase.  Pu erh fakes are usually found and sold as old raw aged pu erh.  There are hardly, in fact no fakes for the newer cakes (after 2007) as the prices are quite low.  (post blog comment - there was now news that Menghai Dayi newer cakes in 2008 have fakes, please examine the security sticker and feel out the embossed threads before buying)