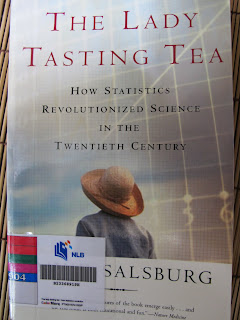 “It was a summer afternoon in Cambridge, England in the late 1920s. A group of university dons, their wives, and some guests were sitting around and outdoor table for afternoon tea. One of the women was insisting that tea tasted different depending upon whether the tea was poured into the milk or whether the milk was poured into the tea. The scientific minds among the men scoffed at this as sheer nonsense. What could be the difference? They could not conceive of any difference in the chemistry of the mixtures that could exist. A thin, short man, with thick glasses and a Vandyke beard beginning to turn gray, pounced on the problem.

This were the opening lines to chapter 1 of the book “The Lady Tasting Tea”. Published by Holt paperbacks, 2001, this book explained the birth and evolution of the use of statistics in science. And, tea, was an indirect participant, in one of the earliest use of statistics in a scientific finding. Even though statistics itself is boring, the author, David Salsburg, made this book highly readable and entertaining. A fun and informative read. Below are a couple more excerpts from the book:

“…..The man with the Vandyke beard was Ronald Aylmer Fischer, who was in his late thirties at the time. He would later be knighted Sir Ronald Fischer. In 1935, he wrote a book entitled The design of Experiments, and he described the experiment of the lady tasting tea in the second chapter of that book. In his book, Fischer discusses the lady and her belief as a hypothetical problem. He considers the various ways in which an experiment might be designed to determine if she could tell the difference. The problem in designing the experiment is that, if she is given a single cup of tea, she has a 50 percent chance of guessing correctly which infusion was served, even if she cannot tell the difference. If she is given two cups of tea, she might guess correctly. In fact, if she knew that the two cups of tea were each made with a different infusion, one guess could be completely right (or completely wrong).

…….In his book, Fischer discusses the various possible outcomes of such an experiment. He describes how to decide how many cups should be presented and in what order and how much to tell the lady about the order of presentations. He works out the probability of different outcomes, depending upon whether the lady is or is not correct

……And the lady tasting tea, what happened to her ? Fischer does not describe the outcome of the experiment that sunny summer afternoon in Cambridge.. But Professor Smith told me that the lady identified every single one of the cups correctly."