A Letter To James of Teadb 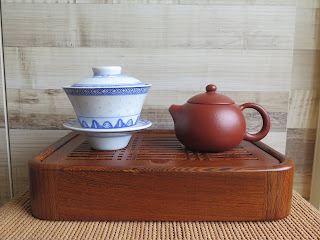 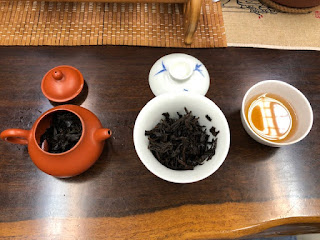 James Schergen is one of the most famous celebrity on the internet when it comes to Chinese Tea.  He appears on his own videos and his articles appear frequently  on teadb.org (link).  He had recently written to me giving his insight on my previous blog post about Chinese teapots (read my 2 latest posts).  I had given much thought and I decided to reply to him in a 'letter'.

Thank you so much for your thoughts about my Chinese teapot blog entry.  I am a big fan of your work and I tune in regularly to watch your tea videos.  I imagined myself literally sitting across the table while you are brewing and sampling the tea.  Sometimes, I shout out loud at the video to call you to reheat the water for your later infusions as cooler water might affect the interpretation of the tea.  It was in good fun.   I did hear on the grapevine that there is a possibility that you may coming to our shores.  I am so happy and I hope to see you and get you to sign autographs.....so I can sell them later to the many tea auntie fans that simply adore you and may even camp overnight at the airport to welcome you if you are really coming.

In your comment on Chinese teapots, you posed a question which literally caught me off guard -

"Can a serious tea drinking person be into tea without owning teapots? This is a harder question, but I do think it is possible."

I actually was dumbfounded for several days.  In my tea drinking groups which I join in Singapore, Malaysia, Hong Kong and Guangzhou, we often discuss many things about tea and tea ware.  We would also debate on tea issues like storage but never whether a serious tea drinker can do without teapots. You had suggested that owning a teapot is a luxury than a 100% requirement.

1.  Marshaln (aka Lawrence) the author of the the famous A Tea Addict's Journal (link) is the most respected and his articles in English and has a strong and steady following of readers worldwide. From reading his entries, I felt he was inclined to use a teapot than a gaiwan to brew his tea.  One of his entry on 25 Feb 2008 :

"I realized today I haven’t touched any of my gaiwans since I returned from Taiwan.

I remember I used to use the gaiwan for everything…. from greens to blacks. Gaiwan was my weapon of choice. Gaiwan was the only thing I’d use, pretty much.

Then slowly, I started using more yixing pots. I gradually bought a few more, and found them, somehow, easier to use. Maybe it’s because I will no longer burn my fingers, as I do once in a while with a gaiwan. Maybe they provide more aesthetic variety. Maybe they do make better tea?

On the better tea question, I am now quite certain that some yixing pots will make softer tea (whether that’s better or not is up to individual taste). I’m still not sure exactly what goes on in a yixing pot that actually changes the tea. There are many theories out there, from temperature retention (sort of true…) to pores in the clay (really depends) to seasoning (maybe true, maybe magic…. and also depends, greatly). Gaiwans, though, still give you an “honest” tea, without really messing with the tea in any particular way. "

Is Marshaln a serious tea drinker?  Yes!  He is the master sifu of tea.  He had invited me once to his palace and his collection of teapots he use for brewing tea is pretty impressive.

2.  During one of my tea drinking sessions in Guangzhou a few years ago.  A retired manager of CNNP who was in this tea drinking group had remarked that the invention of the Yixing teapot was one of the best things for Chinese tea.  I find that his thoughts are appropriate in this discussion.

3.  I spent last Tuesday morning at a local teashop in Chinatown and I posed this teapot question to the manager there.  Instead of answering my question, the manager asked me to sample an old shui hsien with her. The manager used a gaiwan and a teapot to brew the oolong (see bottom pix) and we proceeded to sample the tea.  Tea brewed from the gaiwan seems more aromatic while the tea from the teapot was very smooth in the taste and finish.

Personally, I use teapots to brew my tea at home.  I have a few gaiwans and hardly use them.  Many serious tea drinkers I know use a teapot than a gaiwan.  I do not see a teapot as a luxury.

I had also noticed that the gaiwans used for tea sampling at teashops tend to be better quality gaiwans.  Many believed that the older gaiwans made in the 90s or earlier are very suitable for sampling tea.  Maybe it is the glaze or the quality of the raw material.  These gaiwans can be expensive and asking prices for these old gaiwans can be a few hundred dollars each.

You mentioned that 'good Yixing can improve' a tea session.  However, I interpret your argument that you find that this improvement or difference as not significant or dramatic enough to warrant that; using a Yixing teapot is 100% necessary.  I respect your view even though I disagree with it.

Do look out for me at the airport, if you are coming to our shores, as I will be standing with your hoard of screaming auntie fans to welcome your arrival.  It will be a dream meet for me.

Thanks for the good discussion. Thought provoking indeed. I gave your post some thought and typed up a response. Yes, my wife and I will be in Malaysia for a few days in December. Would be wonderful to meet!

I don't dispute that Yixing improves tea. I am an avid user and also prefer using them over my gaiwans. My pots get very close to daily use.

Buying teapots online isn't easy and is quite expensive. You can't handle the pot and trying to figure out how exactly a teapot will perform isn't possible.. My experience buying teapots is that they also don't always alter teas in ways you expect when you buy it. I have a few pots I intended to use for a certain category of tea and ended up having to rethink and eventually rededicate. This is fine for me but can add cost to buying.

Your post also makes me think of drinkers like a buddy GB I drink with weekly who has a lower budget. GB uses ragtag teaware (mainly repurposed kitchenware) and owns a single yixing pot. He more often than not brews with a gaiwan. Is he a serious tea person? He drinks tea daily (mainly pu'erh, roasted and aged oolongs) and has traveled to Asia a couple times to buy tea. He'd probably openly admit that he wishes he could brew more often in clay. But he has prioritized buying higher quality tea.. To me it seems silly to label him as unserious because he does not own enough clay.

I would also say that it's very possible for someone newer to tea to come in and after observing the tea scene for a bit think yixing is the second most important thing and nearly as essential as tea itself. And then they fall down the rabbithole and start fussing over finding quality clay. In reality, I think people newer are generally better off thinking longer and harder about their tea before venturing into Yixing territory.

If you've got the resources for it, go for it.. But the reality is many people are operating under a budget. If I were instructing someone on how to spend their first $500 (maybe more) on tea or tea-ware, I'm pretty sure I'd tell them to skip the pot and buy cheap basic wares. A high-quality teapot they will be using in a few years is expensive and cuts deep into a beginner's tea budget.

The final point I'd bring up is that there are tea types where using clay is more optional. A drinker that mainly consumes green teas, high-mountain oolongs, or young pu'erh. For them is a high-quality yixing pot required? I'd also say no.

In the end I'm not sure that we disagree that much. I think you rate Yixing a bit higher in importance than I do, but I definitely don't dispute that it can improve sessions, sometimes significantly.

I do hope our paths cross Wilson. I remember reading your posts avidly before Denny and I even started TeaDB! Would be wonderful to drink tea with you.

ps. You're right about the re-heating. It can mess with the camera sound when I'm using the hot-plate but I've been trying to be more diligent about re-heating more frequently.

Related to this - I also have said some time ago that the least efficient way of spending money to improve your tea drinking is to buy teaware. So, yes, if you're on a limited budget the best way to do it is to improve your skills, your water, then your tea, then your teaware, in that order.

I do agree that the tea is always more important than the teaware. But if I were brewing an old Song Pin or Hong yin or any other 80 year old vintage tea, I'd beg, borrow or steal a good clay pot to brew it in, rather than use a gaiwan. :-)

Thank you for your comments. Newer made Yixing teapots are not expensive in my opinion. One can purchase a yixing teapot for about $40-50 and they would brew a good session of tea. When you are talking about price range of about $200, you are able to get a F1 90s teapot or a teapot made by a famous potter. I do not think a price of $40-50 for a good teapot is outrageous for a serious tea drinker. Take time to season a teapot and your teapot will make you many cups of good tea.

Wilson, totally agree. Given that a decent teapot costs now barely half what an OK puerh cake is selling for these days, it is a very reasonable way to improve one's tea experience.

I think you should consider this about the purchase of yixing:

Do you want to “soften” the tea you are drinking or preserve its top nots? If you are drinking aged Factory puerh or stronger/rougher young puerh, no other tea wear makes it more palatable than yixing.

I think if you consider how much an yixing pot cost then think about how many infusions it will influence then ask yourself if a noticeable improvement in each infusion for let’s say thousands and thousands of infusions is worth it? the answer quickly comes to .... yes!

Arguably the most famous Korean Zen monk of our times,Ven Beop Jeong Sunim, past away with only 3 earthly possessions. The clothes on his back. His taped eyeglasses. And his teapot.

Probably because he was a serious tea person.