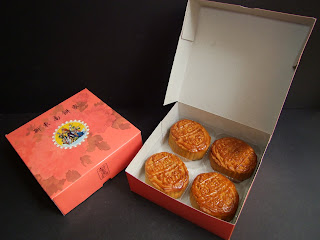 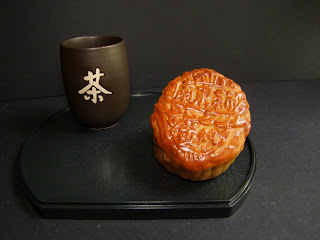 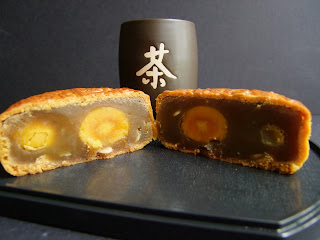 Mooncakes are eaten by the Chinese during the mid autumn period of the chinese calender.  The story below will try help explain the story behind these cakes.

During the Yuan dynasty (A.D.1280-1368) China was ruled by the Mongolian people. The people were unhappy with the occupation by foreign rulers.   The leaders of the rebellion, knowing that the Moon Festival was drawing near, ordered the making of special cakes. Baked into each moon cake was a message with the outline of the attack. On the night of the Moon Festival, the rebels successfully attacked and overthrew the government. What followed was the establishment of the Ming dynasty (A.D. 1368-1644). Today, moon cakes are eaten to commemorate this legend.

Mooncakes are no bigger than a size of a man’s clenched fist.  It is usually filled with lotus seed paste or red bean paste.  These fillings are sweetened.  For the more expensive cakes, salted hardboiled duck yolks are found within the cakes (see pix).  The cost of each cake is about US$4-5, An order usually comes in a box of 4 moon cakes.  Nowadays, to cater to the younger market, mooncakes now come in a myriad of fillings ranging from ice-cream, yogurt, cheesecake and even chocolate fillings.

Traditionally mooncakes are eaten with chinese tea.  My uncle love his mooncakes to complement tie guan yin.  I fully agree with him on his choice, even though I think pu erh (both raw and ripe) and oolongs will also be good choices with mooncakes.  The mid autumn festival this year falls on 3 Oct 2009.  Nuff’ said …..  time to eat the mooncakes.

Gimme a soy-yogurt mooncake and a raw, young Puerh. That'll be a good time for me. I'll binge on sweets to celebrate getting over the Mongolian occupation because it brought tea back to the average Chinese. --Teaternity