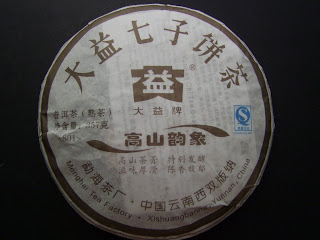 Ripe pu erh tea is tea that underwent fermentation (usually about 6 weeks) during the processing of this tea.  The purpose of the fermentation is to make ripe pu erh tea to have similar taste / flavor as aged raw pu erh tea.  This means that your raw pu erh, which you and I are keeping and storing, will mature in 15/20 years to a flavor similar to that of ripe pu erh.

According to a few tea shops and tea drinkers,  I was advised that ripe pu erh is to be drunk after 2 years from the production of the tea.  This time period will remove the mild scent of the fermentation (known as “wodui” in chinese).  Raw pu erh, given under similar advisement, was also to be drunk after 3 years, to remove the sharpness of the tea.

“The Purple Sky Ripe Tea Cake had a thick, mellow and sweet tea broth. It had extra smooth texture and finish. It was really a solid tea broth as one could feel it easily. Since it has been aging for more than 15 years, there was not much obvious earthy ripe tea smell left. During appreciation, one might not feel that it was actually a ripe tea cake. To a certain extent, the taste was somehow close to the "aged raw tea". Certainly, there was still differences in the tea broth between the aged raw Puerh and the aged ripe Puerh. Even though the aged ripe tea was so mellow that it was close to the aged raw Puerh, the ripe tea broth was too smooth without much vividness and aftertaste ("Huigan") when comparing with the aged raw tea cakes………All in all, if The Purple Ripe Tea Cake was judged by ripe tea criteria, its performance was extra-ordinary and fantastic as it had extra fine mellowness, sweetness, smoothness and texture.”

I have read comments in tea forums as well as from my readers of this blog that aged ripe pu erh tea(10 years old) is really good.  My thoughts on this matter is that when you store ripe pu erh, this tea will continue to ferment naturally over time.   Aged raw pu erh will however, still be the gold standard for pu erh tea as the time and effort involved in storage of the raw pu erh (15-20 years) is considerable compared to ripe pu erh.  I enjoy both ripe and raw pu erh.  However,  I  drink more from my ripe tea collection as my raw pu erh tea lot is less than 10 years old.

Pix shows a 2008 ripe menghai.  This is a new recipe from menghai where aged maocha is blended with the new leaves to produce this cake.

It's good to learn these things about the differences between ripe and raw for aging. At first, I've preferred raw Pu-erh because I liked the more brazen spiritual feeling it gave me. But now that I've grown more accustomed to how different Pu-erhs feel, I like some of the ripe ones as well as the raw. This seems to be progress and perhaps even maturation for me. I know the feelings I get are tied to the taste of the Pu-erhs as it's a related expression of their quality. I look forward to becoming more of an expert in these areas. --Spirituality of Tea