A new twist to "High" tea

"PETALING JAYA: A coffee shop here has been turning hundreds of its regular customers into drug addicts by pushing a "five-star" herbal tea to them.

Each day, more than 150 glasses of tea laced with codeine are sold to unsuspecting customers who keep coming back for more because of the high that the drug gives.

Codeine, the active drug in many cough mixtures, is used by drug addicts as a substitute for hard drugs.

The discovery was made by a Health Ministry team yesterday, when it raided a pharmacy in New Town here.

The team discovered that up to 1,000 codeine tablets a week had been sold to the coffee shop.
Initial investigations revealed that the coffee shop owner had been adding the tablets into his drinks to give his customers an "extra kick".

The owner added one tablet into each glass of herbal tea. The tablet dissolves easily, leaving many customers unaware that their drinks had been spiked.

"Customers who drink the herbal beverage, priced at RM3, will get high. However, there are also dangerous side effects, such as itching, nausea, vomiting, drowsiness, dry mouth and depression," a ministry source said.

As with other opiate-based painkillers, regular use of codeine can lead to addiction.

"On average, a customer who buys codeine tablets for medical reasons would only be prescribed a maximum of 10 tablets to prevent addiction.

"There is no reasonable explanation for the sale of 1,000 tablets to an individual," the source added.

During the raid, a check of the record books revealed that the pharmacist had sold 1,000 codeine tablets to the coffee shop each week. It is not known for how long he had been doing this.

The codeine tablets are sold for 50 sen each after the label has been removed.

The enforcement team seized 3,500 codeine tablets from the pharmacist's stock.

"We had been getting several reports about the pharmacy ordering large amounts of codeine tablets After checking the pharmacist's log book, it was discovered he had been selling a large amount."
Posted by wilson at 9:47 PM No comments: 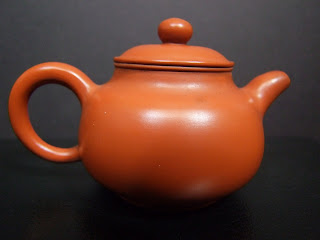 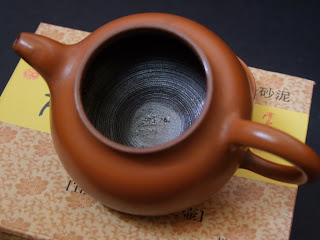 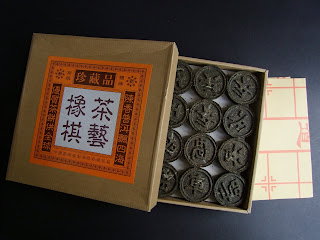 There was a tea shop in  kunming that was promoting a teapot to me.  The owner started to show me all the qualities of the teapot and told me he used these similar teapots (more than a year)for sampling tea.  I was keen on one teapot and managed to buy a teapot he has used for sampling ripe puerh tea instead.  Look at the 1st 2 pix and the tea patin(stain).
Another unusual purchase was a chinese chess set made from compressed puerh tea leaves.  The chess set weighs about 1.5 kg for the chess set with each chessmen made from compressed tea measuring about 3 inches across.  I was reminded many times by the shopkeeper not to brew tea from the chess set as it is from extremely low quality tea.  It really smells good though.
Posted by wilson at 5:42 PM No comments: 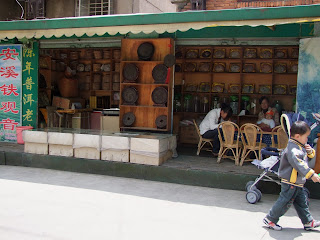 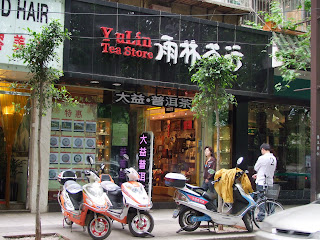 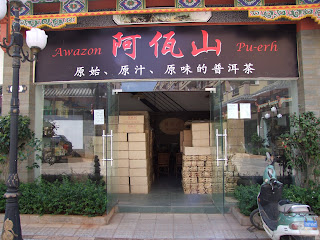 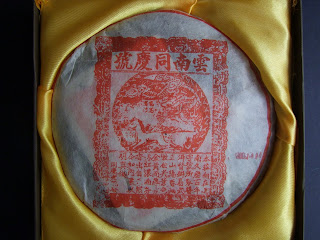 Even though this was my 1st visit to kunming (I hope to make another one later this year), my impression of the people and city is very good.  The people are warm and very friendly.  The food is really fantastic in terms of price, quality, quantity, freshness and variety.  I kid you not when a very good served dinner for 6 in a classy restaurant will cost less than US$50.
The tea houses, tea showrooms, tea retailers, wholesalers is a goldmine to visit when you are a tea junkie like me.  You see traditional tea shops with very simple displays to those modernised ones with neon lights, full shop glass fronts displays.  These retailers do welcome you to try out their teas, which I strongly recommend to any tea visitor like myself before I part with my money in buying a tea.  Most of the tea stores do not carry those teas you see on the internet like mengku, xiaguan....etc.  There are however so many brands, packaging and loose tea in huge boxes that  overwhelmed me.  One of the most popular puerh tea that is drunk on the locals is the loose ripe tea gongting puerh tea( I will explain more about gongting in my later blogs). The last pix, is a  2002  puerh  tea which I purchased  from a very small tea shop after trying out the tea.
Posted by wilson at 3:26 PM No comments: 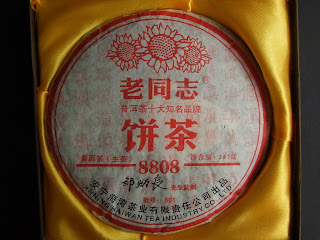 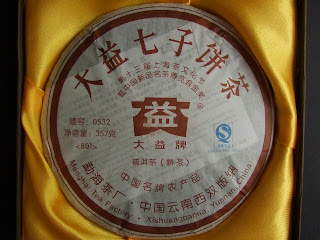 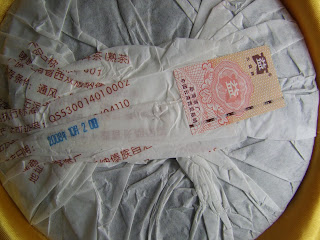 According to Chan Kam Pong's  "First steps to Chinese Pu erh Tea", he explained  "In order to identify different kinds of puerh tea products in the tea factory, trading codes were introduced after a Puerh tea industrial meeting being held by Yunnan provincial branch in 1976.  It was resolved that Kunming Tea Factory, Menghai Tea Factory and Xiaguan Tea Factory should enlarge their productions of Ripe puerh tea and in the meantime specific trading codes should be assigned to different qualities of products for easy identification.  The code number for tea cakes were assigned 4 digits.  The entire code represents the formula of a tea cake'
There you have it.  The 4 digits is a recipe of a puerh tea cake.  Look at the 1st two pix, you see 8808 in the 1st pix and 0532 in the 2nd pix.  That is the recipe code.  The 1st 2 digits represents the invention of the recipe.  Thus 8808 means the recipe was first used in 1988, while the 2nd pix 0532 means 2005.  The 3rd digit will indicate the tea leaf grade used.  The range from 0-9  used to assess tea leafs, finer leafs are of a lower number.  The grading of leafs used in the formula of puerh tea is little subjective as such grades do not take into account the area or season (spring summer...).of the leaf harvested.  The age and mixture of the tea leaves cannot be determined in this aspect.  The last digit represents the production house where the tea formula originated.  1,2,3 represents Kunming, Menghai and Xiaguan respectively.  Haiwan Tea factory was given the code 8.
As these 4 digits are not exclusive or trademarked to the tea factory, you see such numbers being used in among the different factories of puerh tea.
You do sometimes see an addition 3 digits on some cakes like 801 in both pix.  Well just look at the back of the wrapper (3rd pix) to see the production year.  In this case is 2008.  This means 801 meant the 1st production of this recipe for the year 2008. If it is 803, it will indicate the 3rd production run of this recipe for the year 2008. In general, a production run is about 100 baskets (8400 tea cakes).
Posted by wilson at 5:47 PM No comments: