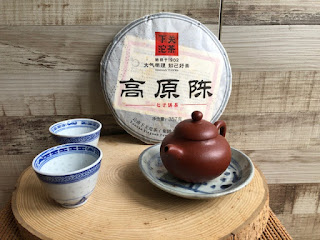 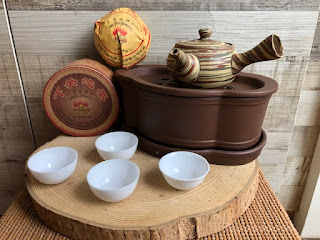 I have a confession to make. I have a weekly affair. At least once a week.......I will have a smoky raw pu erh session.  Smoky raw pu erh?  Thats pu erh tea that has a smoky finish in the aroma and taste of the tea.

There are many tea drinkers that are not into smoky tea or smoky drinks (try smoky whisky).  Many dislike the smokiness comparing the aroma and taste to a bonfire, burnt food and a friend even calling it a charcoal mouthwash.

There are a couple of famous smoky teas that you can easily buy from a tea shop.  One is the famous lapsang souchong.  This Chinese black tea is smoked dried with burning pinewood, whose smoke would be 'infused' into the tea.  The other is smoky pu erh.  I believed that smoky pu erh was a consequence of smoke introduced at some stage in the tea production that made the tea smoky.  Many newer pu erh now, are mainly non smoky.  New smoky pu erh are a rare commodity.

I enjoy drinking older raw pu erh .  The tea makes for a more mellow, smoother and sweeter taste and aroma with age.  Smoky pu erh will lose their smokiness over time leaving a whisper of smoke in the tea. I also believed, that some old raw pu erh that exhibit a menthol or camphor aroma is the result of residual 'smoke' that resembles menthol or camphor.  This 'camphor' finish (called Zhang Xiang in Chinese) in pu erh tea are highly sought after by seasoned pu erh tea drinkers and usually these tea would command a high price.

But I digress.  I would have to defer the reopening of my online store.  The re-outbreak of covid virus worldwide had severely delayed the delivery of international parcels.  Post offices and other couriers had warned of severe delays and even suspension of services in certain countries due to lockdowns and work suspension.  I will keep my readers informed when I reopen my online shop.  To all my readers, please stay safe.
Posted by wilson at 2:50 PM No comments: 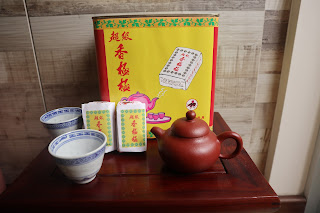 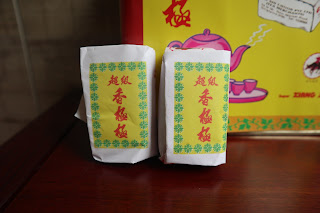 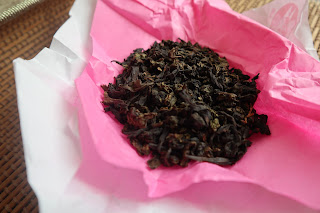 This is Pek Sin Choon's most premium hand wrapped tea sold in a tin of 50 packets.  15g per pack, this tea is called Xiang Ji Ji.  The roast levels lies between mid to high roast.

"As the standard of living in Singapore improved, the preeminent fragrance was developed in between 1970s and 1980s to cater to the requirement of the tea drinkers who wants to enhance their experience in tea drinking. The tea soup is mild red in colour which is simple at first sip but leave a strong aroma around the throat and produce great aftertaste."

I used half a packet on a small teapot (100ml).  The aroma was cheerful like a fresh bouquet of flowers.  The mouthfeel was good, oily and mouth watering.  I had brewed this tea after dinner and I found it very suitable as a after-meal tea.  A good addition to my oolong stash.