A Fireside Chat With Matthew of Mattcha's Blog 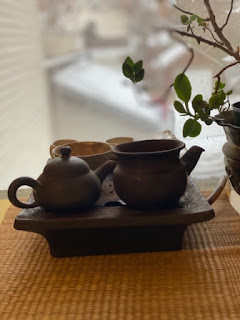 Matthew of Mattcha's Blog (link) graciously allowed me to ask him questions about his passion in Chinese tea,  He is a Canadian and had been blogging about tea since 2008. He has a loyal following of readers worldwide and the following email chat below is reproduced in full (unedited).   Pix in the blog was also provided by Matthew as well. Thank you, Matthew for spending time answering the questions.

a). Hello Matthew, could you tell us something about yourself and how you began your journey with Chinese tea?

Hello, my name is Matthew commonly know in tea circles as MattCha and I like my daily tea! Like many more serious tea drinkers and even other more-famous-than-me tea bloggers I first started drinking green tea- Japanese, Korean, and Chinese. Probably around 2006 I started to consume more puerh than green tea. My journey with tea throughout the years closely mirrors my journey in life and you can see glimpses of that if you read through my blog.

b). Readers had noticed your preference to raw (mostly newer). You do not write anything shou(ripe) or other teas like oolong or green tea? Any reasons why?

I used to write a ton of posts on green tea especially matcha and Korea green tea and you can go back and see that on the blog. I haven't had fresh green tea in a few years. Oolong and aged Korea tea such as Balhyocha, I mainly drink with guests or paired with Chinese or Korean food these days. I still really enjoy these teas and have a long and complicated history with them, but I find they are just not as interesting or deep as puerh nor does my body enjoy them as much.

I started drinking puerh at a time when raw puerh wouldn't bankrupt you and shu puerh was almost always inferior to sheng puerh. I think a lot of puerh drinkers who started when I did will not prefer to drink shu when they have access to aged or semi-aged sheng. Part of the rise and popularity of shu is partly because people can't afford to drink older sheng or even newer sheng. The other part is marketing shu as “puerh” but it actually isn't really exactly the same as sheng. I really do enjoy a good shu but only consume a few pots every year usually in the winter and its often aged shu. Also, I understand that shu is widely accepted to be “puerh” and historically there is a reason for this as locals wanted to control the product and marketing of the raw material more closely.

I know that I might be controversial in saying this but I feel that sheng is “the original puerh”. “Shu puerh” is the same raw material as raw puerh but processed differently than raw and “Yesheng puerh” is a different varietal of tea material from the same area processed as raw puerh… but are they really puerh? Neither are original puerh but an expanded definition that has evolved to market different puerh like product throughout history. Anyways…

The biggest problem with tea review blogs is that it is often not a very good representation of what the authors are actually drinking. I would say this is true with me as well. Surprisingly, I actually don't hardly drink newer puerh tea at all. I mainly exclusively drink aged and semi aged raw puerh. When it gets cold (in Canada it gets very cold) I only consume semi aged and aged. In the summer I might consume a few hundred grams of fresh puerh if I don't have access to fresh green tea but that's it beyond what I am sampling on the blog. Recently, I sent a bunch of the puerh I regularly consume as a blind sampling to another blogger, Marco, of Late Steeps Blog. I have about 12 cakes of puerh sealed in Mylar in my shelf that I regularly drink through day to day. I believe you like to break up a cake at a time ;) Check it out on Late Steeps if you are interesting in what I actually am drinking on a day to day basis.

However, I try to keep my blog a pretty good representation of what I am purchasing. So all those fresh beings of puerh you see on the blog are put away for long term storage only to be consumed many years later. Most of the newer raw puerh posts you see on the blog are samples that I have either received for review or that I have purchased in search of purchasing a larger quantity to age. I began to look to buying a few more newer raw puerh dispite the increased price to better control the aging process because I liked how my cakes have very slowly aged out in my Canadian storage…

c). You stay in the ‘cold north’ in Canada, how do you store your tea? How is the storage coming along ?

The answer: poorly…. hahahaha… I wrote a post a few years back strongly in favor of sealed storage and at that time lots of people scoffed at me. These days lots of pictures of pumidors have a bunch of sealed Mylar bags in them. I use either plastic wrap and/or Ziploc within Mylar these days to store my puerh. Very very few of it is stored in a Hot box as outlined by Marco on his blog. I've learned from experience that sealed storage is best for the extremes here in Canada. A few years ago, unsatisfied with optimally storing such cakes, I started to deliberately not purchase too many more humidly stored semi aged cakes and simply buy them from Asian storage once I run low. I think you wrote a blog post about this last year? Very smart especially as more semi aged becomes easily available to Western puerh drinkers.

d). How is the Chinese tea scene in Canada? Are there lots of drinkers? Do you visit tea shops there?

There are two really great amazing tea shops in Canada. One is Camellia Sinensis in Montreal (I have never been but only heard positive) and the other is O5Tea in Vancouver (I've written lots about this one, Pedro is the best). There was a Tea Festival in Victoria BC (also have written about this one) but I believe it has been cancelled for a few years now and there is still one in Toronto before COVID hit. Unfortunately, living in the middle of one of the geographically largest countries in the world I am thousands and thousands of Kilometers away from all the action. I have rough plans after COVID to meet up in person with Shinzo who is the American Xi Zi Yao representative in Calgary about 8 hours away by car. Interestingly, when I first arrived in Regina there were 4 Chinese Tea houses here which really surprised me. Then it turned out they were all immigration scams with only one of the four carrying legit tea and aged puerh. One day they just packed up and disappeared overnight. It reminded me how lucky I am to be here in Canada drinking tea despite my isolation from other serious drinkers...


e). As the world is still battling Covid, how do you see the future of Chinese Tea post -covid? ( you can say anything)

The Western puerh dealers will know better than me but I think they might have had their busiest year this year because I think tons of Westerns trapped at home are more seriously taking up puerh tea or consuming more.

COVID has made the richest even richer and the poorest even poorer. Economists are dreading the “K” shaped economic recovery curve. What does it mean for tea drinkers? I think it will most definitely make drinking puerh even more elitist which in some way is sad. However, with that said there is still some very satisfying puerh for reasonable prices out there which will keep things fun. Overall, tea in the West will grow big time until this whole COVID thing is under control. 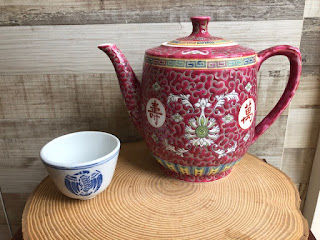 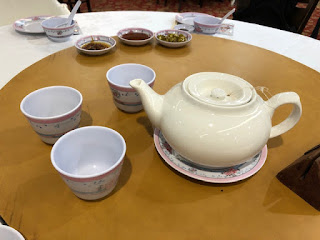 When I dine at a 'slightly more expensive' Chinese restaurant in Hong Kong or Guangzhou, Chinese tea is usually offered to diners.  There are even eateries that has a tea menu for diners to select their tea.  Tea is either charged per customer or by a serving of tea leaves.  There are certain restaurants that offer tea brewing utensils like tea tray, electric kettle, fairness cup.....like brewing tea at home.....to make the tea drinking session more intricate during dining.  I find the cost of tea at these establishments   in my experience, not too expensive.

Pairing drinks with food is supposedly to be easy and pleasant.  I felt that if the drinks do not make the dining experience unpleasant, the drinks are suitable.  I had eaten at western eateries where I could select a glass (or 2 or 3) of wine to accompany my meal.  Wine drinking is different from tea.  Wine is to be sipped and swirled in the mouth before drinking.  It is not appropriate if you find a food extremely spicy .... you reach out for your wine and gulp down the entire contents to 'extinguish' the spiciness.  You could do that with Chinese tea.   It would be different how a diner approach Chinese tea and wine during a meal.  In Japan, I had warm sake to accompany my meal.  It is surprising refreshing (and intoxicating).  I recommend you try it.

To me, good wine or good Chinese tea should be appreciated on its own. Drinking them after dining would be a good idea.  I appreciate the aroma and taste better when I drink them without any accompanying food.