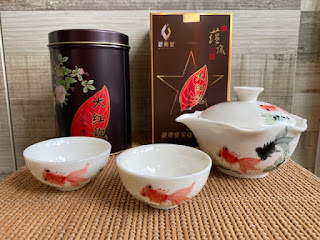 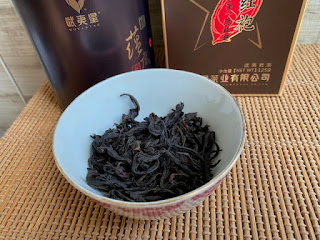 I had recently opened a 2018 tin of Wuyistar Da Hong Pao. This black tinned edition is packed with 125g of oolong. I like tinned oolong that are double lidded as it does keep the oolong dry and somewhat airtight. This would help prevent the oolong losing its aroma or going flat in the taste.

I had tried Wuyistar's tinned version of Shui Hsien oolong and I am pleased with the the tea. Wuyistar has quite a good following of oolong tea drinkers and they offer a wide range of oolong to cater to their customers.

This tea goes for around $30-36 depending on where this tea is sold in your region. Such tea are getting expensive that 1 kg of this tea would cost $280 (if $35 per 125g tin calculation is used). Perhaps this is one of the reasons why smaller teapots are used to brew such oolongs.

This oolong roast levels are high. There is a nice fragrant aroma that stays in your mouth after a cup of this tea.  There was a flowery finish in the aftertaste.  This Da Hong Pao does, after brewing 6 infusions, weaken in hurry. A very decent tea.  I personally prefer Wuyistar's canned offering of Lao Chong Shui Hsien as it offers a more punchy and vibrant taste and aroma. Do let me know your thoughts on the Wuyistar oolong cans.
Posted by wilson at 12:14 PM No comments: 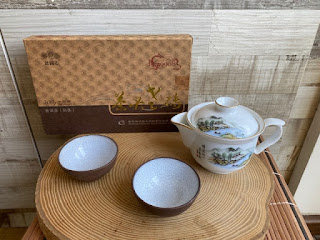 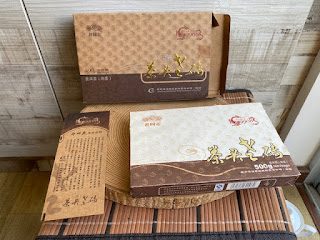 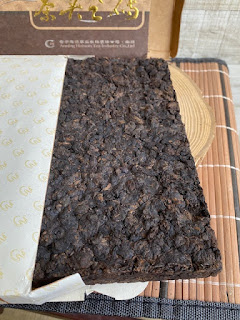 Lau Cha Tou? What is that? Lao cha tou is actually ripe pu erh tea. During the manufacturing process of fermenting ripe pu erh tea. Some of the tea leaves clumped together and looked like tiny nuggets or pebbles. Tea manufacturers would collect these nuggets from their many ripe tea productions and pressed them into bricks when there is sufficient quantity of these lao cha tou.
I had just opened a 2007 Haiwan Lao Cha Tou. This tea came compressed in a 500g brick. The Taetea (Dayi) version, for your information, comes in a 250g brick.   Notice the tiny clumps of tea in the brick.
There are not much reviews or write up on this tea.  Why is that?  As I had stated, lao cha tou is produced and made for sale once the tea producer had enough of such tea to put up for sale. This would imply that the producer would need to collect the tea clumps from many ripe tea productions. Haiwan and Dayi, in my opinion, are 'big time' producers of ripe tea on a yearly basis and more often than not, most lau cha tou sold are invariably from these 2 sources.
Pu erh purists hardly review such tea. You can conclude that this tea would have subtle variations in taste and aroma in the tea. Not surprising as lau cha tou is a collection of various ripe tea.  These subtle differences can be discerned from different production years or from different bricks from the same production to differences within each brew. It is this inconsistency that tea purists avoid doing a serious review of the tea.
I like this tea for this very reason.  It is a tiny surprise in every cup. This 2007 brick is already 14 years old.  The tea is smooth and mellow. There is sweetness, toasty and herbal notes in every cup. There are differences but the taste and aroma but on the whole, the tea does average out to a very pleasant tea session.
I am tempted to buy more lau cha tou when I see them for sale again......I really miss travelling for tea.
Posted by wilson at 11:47 AM No comments: