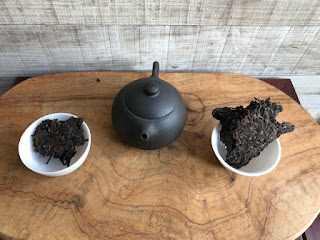 I had been reading more often especially during the lock down.  I came across an article about the Goldilocks zone.  This is a reference in astronomy where astronomers look for planets whose distance from its star is similar to Earth's distance from the sun.  Astronomers believe that looking for such planets may yield a higher chance that the planet may contain water and the chance of life on that planet.  In other words, astronomers are looking for planets that is not too hot and not too cold, just like the story of Golilocks.

When It comes to Chinese tea, I want to believe there is 'Goldilocks zone' for the tea - not too strong, not too weak, not too astringent, not too bitter.  I tend to find this zone by adjusting the amount of tea used and the infusion times when I brew the tea.  I believe every tea is different whether pu erh or oolong, that each tea may require different or micro adjustments to achieve the Goldilocks zone of tea.  Haiwan ripe teas brews notoriously strong and I would normally reduce about 25% of tea I normally used to brew.  However, I would add extra 1-2g when I brew Mengku ripe tea as the tea would taste better with that extra tea.   Maybe it is a personal perception, like letting my Xiaguan iron cake pu erh infused for a few extra seconds before I pour the tea out from the teapot.  I would like to point out that such adjustments should be done if you are a hard core tea drinker.....if not....you may waste a lot of tea for this experiment.

A few serious tea drinkers had also shared similar thoughts that different tea require its own set of infusion times and amount of tea used.  I can appreciate that tea reviewers normally stick to a firm set of rules and practice like 7g for a 120ml teapot or gaiwan when they review the tea.  I would encourage that they should further recommend or conclude based on their initial brews, whether the tea should be better with less/more tea leaves or less/more infusion times in order to have a better cup of tea.  Yes, this would be subjective but I think the review would be much better for it.

To my readers, do not be entranced by the notion of fixed amount of tea and fixed infusion times when brewing your tea,.  Try micro adjustments, that you as a serious tea drinker, so we can find the 'goldilocks zone' for that tea.