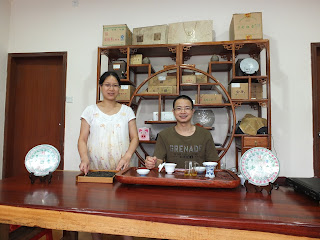 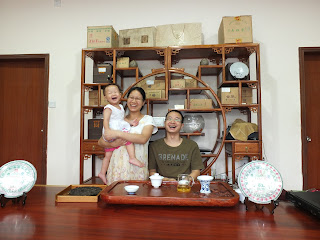 Mr Lim Yi Shen was only 21 years old when he arrived from his home in Anxi to work in Guangzhou in June 2006  helping his uncle who ran a teashop in Fangchun.  He started as a delivery boy, pedalling on a bicycle, delivering tea from the shop to customers within Fangchun.  In the course of his work, he met Miss Chen Hwa Yi 23 (whom he later married), who was working as a tea assistant in Fangchun.  Mr Lim and his wife had witnessed the wild rise and dramatic fall of pu erh tea prices in 2007 and saw an opportunity to start a tea business for themselves.

2007 was a year to remember among the tea traders in China as it was the year that saw a period of frenzied price speculation of pu erh tea that saw the average price for a Jian (a wholesale carton) rising from 500rmb at wholesale price rising within months to 5000rmb.  The buying and selling of pu erh tea was the way to make easy money, where one can earn a month’s wages in one transaction within a day.  Tea factories even received pre-orders for their tea and order chits were issued to the buyers pending deliveries.  Trading of these order chits changed hands many times during this speculation period.  All transactions were in cash and Mr Lim recalled seeing many shops using counting machines to count the cash.  Teashops dealing in pu erh tea had drawers full of cash at the end of every business day.  It was no surprise that the appearance of fake pu erh, poorer quality pu erh as well as the lower demand at these high prices burst the frenzied activity at the end of 2007 bringing many tea speculators to their knees.  Many people end up with high priced, unwanted tea and were financially ruined ‘overnight’.

The couple borrowed 20000rmb from close friends and relatives and started a small teashop in April 2008 along a small street in Fangchun.  They got married within the same month as well.  To save money, the Lims cooked their daily meals in a corner of their teashop.  Many teashop owners practice cooking and eating their meals within their premises but recent fire safety laws now prohibit cooking within the teashops.

Mr Lim in 2008, could at this time select the better pu erh tea in the tea markets and could easily purchased cartons of the better tea at close to factory price.  Many tea speculators who were ‘burnt’ by the speculation bubble were ready to cash out their misadventures at any price.  Mr Lim and his wife had planned to trade in pu erh tea in Fangchun, sourcing for tea and making a profit from the difference in selling or buying the tea.  There were hardly any pu erh tea produced in 2008 due to the lower demand which in turn benefitted Mr Lim in his tea trading in Fangchun.  The Lims literally went shop to shop in tea village and peddled their tea.  Demand for pu erh tea recovered after 2008 especially due to the ‘fat reduction’ health benefits found in pu erh tea that were reported in Chinese scientific journals.

Mr Lim also took advantage of the internet.  Taobao, is an internet portal for people and businesses to advertise goods and services.  This online company had started in 2007 and Mr Lim decided to put his tea on Taobao as an additional selling platform.  He took pictures of his tea and uploaded the information on Taobao. He was willing to sell in smaller quantities to individual customers or shops.  China EMS, a door to door mail service provider was recently available, which enabled Mr Lim to simply call for a pickup and the tea order could be delivered anywhere in China within a few days.  He had even received a few foreign orders from USA and Japan.

Buying things on the internet was a novelty as well as a game changer.  Tea drinkers or collectors who have no access to certain teas can now buy on the internet.  Mr Lim’s online teashop in 2008 was one of the earliest internet tea merchant and business was brisk and profitable. Selling online requires a buyer to remit money (inclusive of freight) to the seller, which meant Mr Lim had no issues with bad debts.  Mr Lim also sold tea that were available from neighbouring teashops and if an order for such tea came in, Mr Lim will simply purchase the tea from the relevant shops accordingly.  Orders are only sent out only when payment is received.   Business enquires and sales through Taobao was good and brisk that the Lims were always on their laptops throughout the day with sales enquires beeping throughout the night.

Today, Mr Lim had also included ‘Wechat’ app in his busness.  “Wechat’ is the Facebook of China, where users can post entries on tea and readers can cross reference to get information on this tea.  Mrs Lim informed me that most of the online sales and enquiries are now channeled through ‘Wechat’ than Taobao.

Today, tea dealers in Fangchun are technologically savy, with wireless internet available in most teashops.  Payment for tea now is cashless and many buyers simply remit money wirelessly via their handsets when purchasing tea in Fangchun.  Mr Lim gave me a wry smile when I met him in last December.  He noted that the tea market today is very quiet now.  He missed the noisy speculative days of the tea markets.

The Lims now have 2 daughters and had saved enough money to make a down payment for a small apartment In Guangzhou.