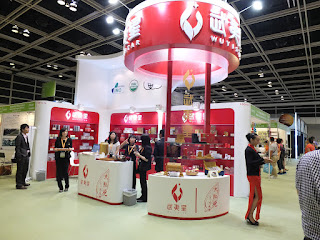 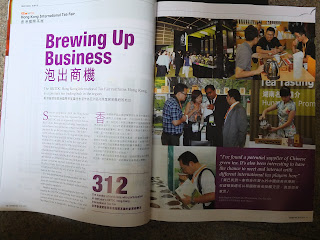 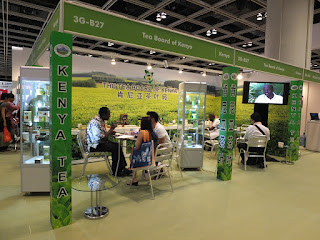 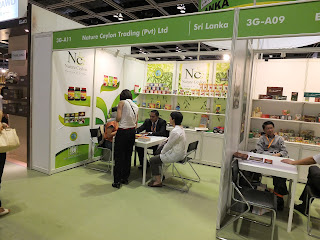 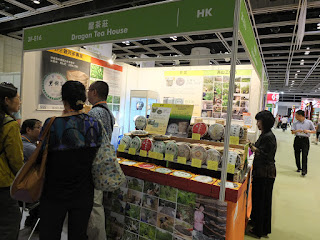 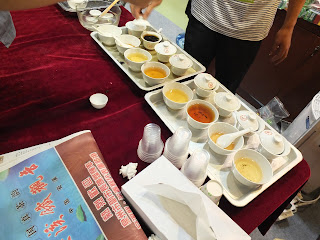 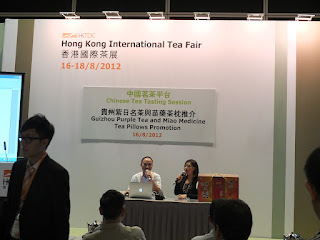 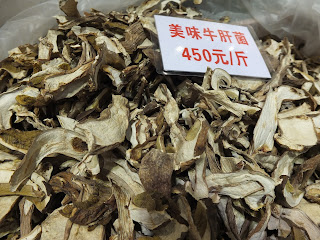 Trade fairs in Hong Kong are a serious business.  Throughout a year, there is some trade fair going on at the Hong Kong Convention Centre.  There are watches, jewelry, electronic, fashion fairs.....there are so many.  Popular ones like the Spring toy fair, is held in January,  and will drive up hotel prices a fair bit.

One of my readers remarked on the 'lighter attendence' as she had expected a better turnout of visitors.  She is right.  The first day of the tea fair was a 'typhoon' day.  A  typhoon warning alert was sounded out - a level 3.  Let me explain.....In Hong Kong, typhoon alerts levels range from low levels from 1-3 to high levels of 7-9.  Anything level 8 or more meant that shops, schools and government offices are closed for the duration of the warning. Hong Kong had expected a  typhoon during this time and citizens and visitors were generally wary of the weather conditions that few days.  I was fortunate that the brunt of the typhoon came and went in the late evening on the 16th and the typhoon did not cause any major damage to Hong Kong.

Another reason for the lower turnout, in my opinion, is that, many tea buyers, for example of Chinese teas, would visit China directly to source the teas.  Its just a guess.  However, I felt that this Hong Kong tea fair is important as it create an important venue for Hong Kong tea producers and teashops in creating awareness.  Visitors, both local and abroad, will be made aware of the existence of these tea businesses and what is on offer in Hong Kong.  It also allows tea producing countries like Kenya, India, Sri Lanka to provide exposure of their tea products to this part of the world.  The tea market in this region is very big and cannot be ignored.  Tea, especially the teabags from these regions have a classical characteristic - consistency.  A cup of this tea today, this week, this month or next year will have the same taste and aroma (almost in every cup) anywhere in the world.

I could sample lots of tea at this tea fair. You can observed from one of the pix, that there was the traditional sampling tea in a bowl, where you spoon out some tea in your cup for a sample.  This pix was taken a Fujian oolong booth. That booth had different levels of roasted oolongs to suit every palate.

I was even tempted to purchase a scented tea pillow but my luggage was maxed out with tea I had bought in Guangzhou a few days earlier.  The last pix shows some dried burdock slices.  Burdock is a root, and the Chinese use this root mainly in soups.  Dried slice burdock are used in soups and are now sold in teashops in small slices as burdock tea.  It is a very delicious toasty drink with a hint of sweetness.  I just managed to squeeze a pack of burdock slice into my overloaded luggage.

I had the opportunity to meet up with the famous tea blogger, Marshaln during my stay in Hong Kong.  Thank you, Marshaln, for your very generous hospitality and most importantly sharing some of your thoughts (and tea) with me. 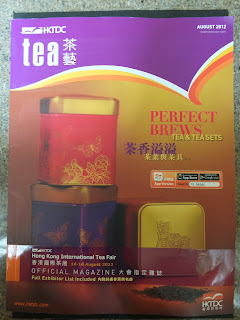 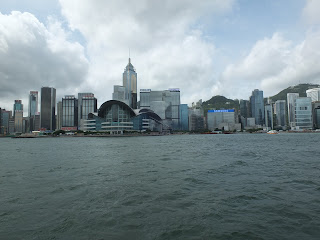 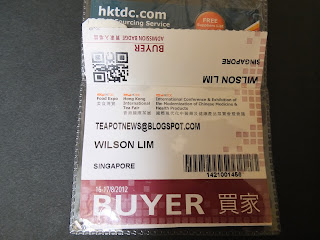 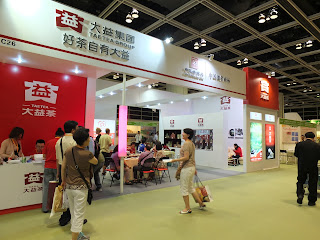 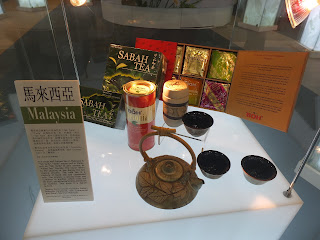 The Hong Kong International Tea Fair was held from 16-18 Aug 2012.  Organized by the Hong Kong Trade Development Council and held the the Hong Kong Convention Centre, this tea fair was also held in conjunction with the Hong Kong Food Fair 2012.

The convention centre is located on Hong Kong island.  Getting there is easy.  I was staying in the Kowloon side and I had 2 ways of getting there.  One was taking a subway to the Wan Chai stop and it takes another 10 minutes walk (sheltered) to the tea fair.  Another option, which I took was taking the Star Ferry from Kowloon to the convention centre.  The ferry trip took me about 15 minutes.  (see Pix 2)

I had registered myself as a buyer to the tea fair.  I remembered I had not much of a choice; it was either buyer or seller.  Registration is free and you could register at the fair itself.

My Malaysian readers would be pleased to know that Malaysian tea is also represented at the tea fair (last pix).  I did find an opportunity to hop over to look at the food fair and I am pleased to see a strong Malaysian presence there as well. The famous Julie's biscuits and many popular 3-in-1 coffee dealers were there promoting their products.

Yes, Taetea (we call it Dayi here) set up quite an elaborate booth at this tea fair.  They had 4 tea sampling tables, where you could sample almost all of the  current year's Dayi tea.  I did buy a unique 6 year old Dayi raw tea at the booth - more of that later.

The 2012 Hong Kong tea fair is very well organized.  You have forums, presentations, talks, conference and negotiation rooms that provided a very sleek and professional atmosphere to the event.  At the same time, there were also moments of casualness; like a tea competition on making the best cup of Hong Kong milk tea.  Very impressive.
Posted by wilson at 3:39 PM 1 comment: 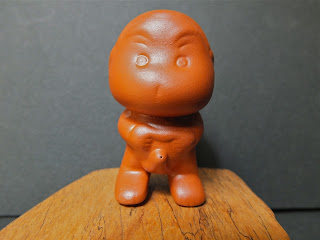 "A TV news program in which a reporter submitted green tea as a urine sample and was then diagnosed with various diseases has accused private hospitals of overprescribing patients.Some doctors questioned the reporter’s method of using green tea to judge the accuracy of medical tests, calling the ploy “unprofessional.”In the China Central Television program, an undercover reporter went to a major public hospital in Beijing for a health check, and his results all turned out fine. He then went to several private men’s hospitals and submitted a small cup of green tea as his urine sample.The reporter was stunned when doctors at a hospital in Shijiazhuang, Hebei Province, told him they found an excessive level of white blood cells in his “urine,” indicating that he was suffering prostatitis, an inflammation of the prostate gland, and orchitis, swelling in the testicles.A doctor said he would need to undergo seven days of treatment, with each day costing 546 yuan (US$86).At another private hospital in Shenyang, Liaoning Province, a doctor checked another green tea sample and diagnosed the reporter with spermatoceles, or cysts near his reproductive organs. The doctor said the reporter needed immediate surgery that would cost 5,000 yuan.A third hospital, in Changchun, Jilin Province, told the reporter he needed to pay 8,000 yuan for a health check.The program sparked a public outcry online.Some people said they wouldn’t know where to seek medical help after watching the program. Others said the journalist shouldn’t have set up such a trap for hospitals because a doctor should believe the sample was from the patient, without having to check its authenticity. (SD-Agencies)"

Pix shows a "pee pee boy".  That's what they called it in the mandatory tourist tea shop when you take a package tour in China.  This 3 inch very porous clay figurine is filled with water when immersed.  Place this boy on your tea table/tray and pour boiling hot water on its head.  The expansion of the air and water inside the pee pee boy will result in the clay boy pee-ing away.  Great fun
Posted by wilson at 2:54 PM No comments: 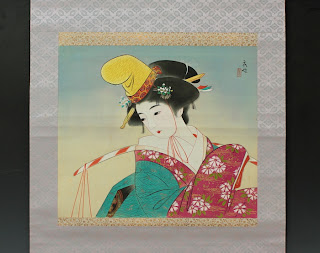 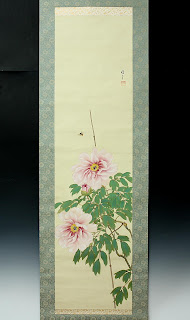 I am always intrigued looking at pictures of tea rooms in Japan.  Tea is big in Japan and the famed Japanese tea ceremony is like an art in action; so intricate and elaborate.  I have 'youtubed' videos and simply marveled every time when I see a Japanese tea making ceremony in action.


There are houses or apartments in Japan where an area or room is set up just for brewing tea.  I had noticed that the walls of these tea rooms were usually adorned with art.   Scrolls of painting or calligraphy were hung conspicuously, I believe, to enhance the tea brewing ceremony.


There are several motifs that are normally used in the art scrolls for the tea room.  A common theme is the 'san-sui' (aka mountain & water).  This theme would be that of mountain, lake, sea, nature scenarios.  Such art are usually single color or monotone.  You can also have animals or pictures of the Sun, another popular motif used in painting scrolls.  Pictures of the rising sun are very popular in Japan.  Likewise, animal pictures like cranes, birds, tiger and other animals are sometimes preferred by the house owners.  Calligraphy works by renowned celebrities or monks are sometimes seen in the tea rooms.  There are also art scrolls that are done in color as seen in the pix above.  The 2nd pix is done by Oya Shunrei (around 1930-40s).


I had purchased these art scrolls on Ebay.  Art dealers in Japan do put these scrolls for sale.  I try to place my bids at the last minute of the sale in the hope I am not outbidded at the last moment.  I think the ebay terminology is 'sniping'.  I am not successful at times as I do get 'sniped' back in the last minute bidding process.  Anyway, I managed to snag a couple of san-sui and 2 of these colored scrolls early last year.

Do look at the dimensions before you buy as in the case of the 2nd pix, I found that the scroll was too long for my wall.  The entire scroll took up the entire height of the wall and did not look appropriate when hung.  Maybe I should move house.


Any Japanese readers...... I would appreciate if you can send me pictures of tea rooms in Japan ...... and if you can point me to the right direction, I would love to visit Japan to look and appreciate Japanese tea farms and tea rooms first hand. Thank you.
Posted by wilson at 10:47 PM No comments: