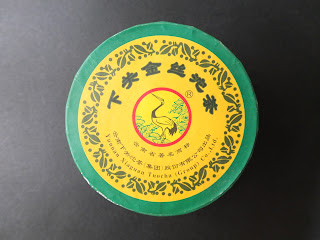 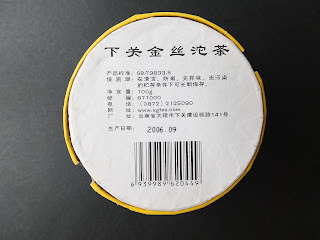 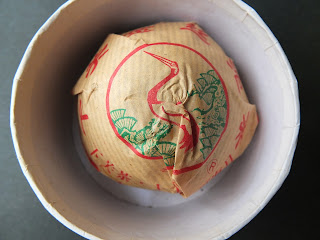 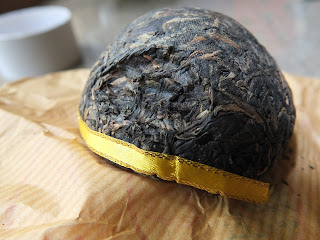 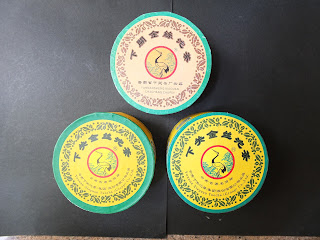 I opened a 2006 Xiaguan 'gold ribbon' tuo today.  This 100g tuo comes packed in its own box and yes, a gold ribbon is enclosed inside as well.  Xiaguan started producing this tea in 2004 (see bottom pix- top tuo) and has been producing this tea yearly due to its popularity among chinese tea drinkers.  Its inexpensive with the current year tuo priced at less than $5.

Yunnan Sourcing promotes this tea as "The "Gold Ribbon" blend was first introduced in 2004, when it was a special order production for a large Guangzhou Xiaguan wholesaler.  Using superior material from Wu Liang, Yun Xian, and Yun Long mountains, and carefully blended to be full of aroma and cha qi.  This has now become a classic premium blend from Xiaguan!"

I noticed a nice delightful pronounced honey aroma when I brew a pot of this Xiaguan tuo.  I normally drink a cup of honey a couple of times a week (half mug cool water and stirring in a spoonful of honey).  The aroma from the tea is like drinking a nice cup of honey -  a sweet, fresh floral scent.  This tea is non smoky unlike the other Xiaguan tuos I had encountered, but I enjoy this tea very much.  A refreshing and happy tea.  I do recommend you include a tuo in your next tea purchase.

One more thing, do not throw away the tuo box after use.  It makes a mini tea caddy and is especially good for pu erh as this paper box allows your pu erh to 'breathe' especially when you have broken up a pu cake/brick for drinking. 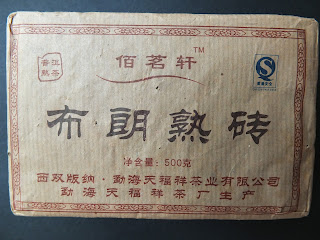 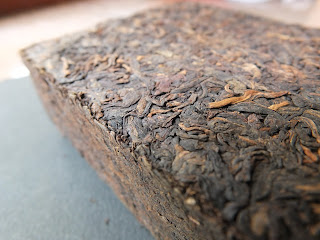 I had purchased this ripe pu erh brick on one of my visits to Qiu Xiang teashop in Kuala Lumpur, Malaysia last year.  This is a 2008 Tian Fu Yang brick.  I had sampled this pu erh at the tea shop and decided to buy this hefty 500g brick for slightly less than US$15.

This ripe brick, as described on the wrapper, was made with tea leaves from the Bulang region in Yunnan.     I would brew 8-9g of this tea in my 190ml teapot and I prefer longer infusions for this pu erh tea.  It brewed up an aromatic scent with a mild sweet finish. The sweetness is nutty like eating freshly roasted chestnuts.  A brew of this tea can yield 8 good cups of tea.

But I digress.  I had earlier mentioned in my earlier blogs that old ripe pu erh has a mellow taste and can   developed an aged taste as well.  One clear difference between drinking a ripe tea than compared to drinking a raw pu erh tea is the overall sensations when you finish your tea sessions of that respective tea.  There are raw pu erh tea that may give the drinker a sensation of intoxication, or a 'happy high' that last a couple of minutes.  Some raw pu erh  may make a drinker sweat before a nice cooling releasing sensation sets in.  Ripe tea would not produce such results but to me, drinking a good ripe pu would give me a satisfying pleasant, mellow and earthy cup of tea whenever I brew a session of ripe tea.  Yes, there are many more differences, not pointed out by me,  that you the reader would have experienced.  I would encourage all pu drinkers not to stick strictly to drinking raw or ripe tea but to enjoy both types of pu erh tea, so that you can experience the full spectrum of taste, aroma, flavor and sensations of a pu erh tea.
Posted by wilson at 3:19 PM No comments: 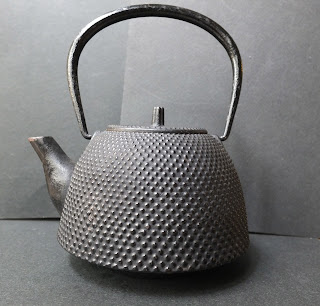 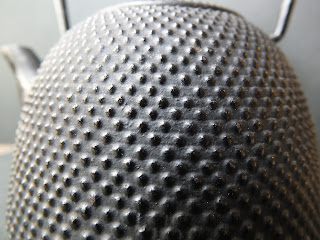 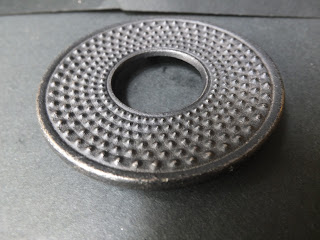 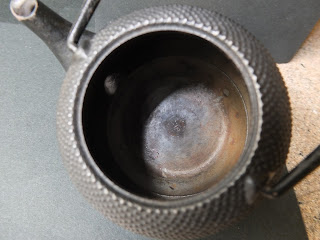 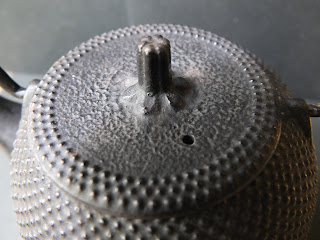 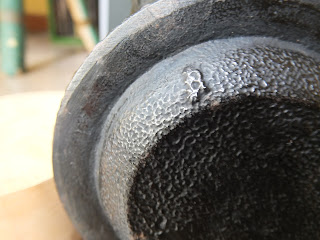 My kid thought I had purchased an antique when I opened a box that arrived from Japan a few days ago.  Inside the box was a used Japanese Tetsubin tea kettle.  "I am going to use the kettle to boil water, and to brew tea with it' - I told my daughter when she had a closer look at the kettle.  Her reply was an exclamatory "whoa".

You, the reader will ask me, after looking at the pix,....why buy an old kettle? Its old and even has some discoloring marks on the inside of the kettle.

Well, I was chatting with a new tea friend from Ipoh, Malaysia about pu erh in general when I was told to buy a tetsubin kettle.  I was told to get such a kettle as a tetsubin 'sustains heat better from fire to pot so there is little reduction in heat from kettle to pot......and for vintage tea you need really hot water to bring the tea out'.  I laugh in jest.   It could be a psychological enhancement......its all in the mind.  Another user had also  told me the water tasted better.  Curiously, in the back of my mind, I could vaguely recollect that I had seen such kettles in use......at a friend's place in Hong Kong, a tea shop in Kuala Lumpur, Malaysia and in another tea shop in Taipei, Taiwan.  Water in Singapore can be drunk straight from the tap.  The water here, comes from reservoirs, desalination as well as from a reverse osmosis process (from waste water).  I thought if a Tetsubin kettle can make my tea better.....its worth a try.  I decided to take up the challenge.

A tetsubin kettle is simply a cast iron kettle.  Its made from iron.  Nothing fancy.  Yes, I am sure you have seen iron cast pans and trays used in the kitchen but the popularity of using cast iron kitchenware is waning, at least in my part of the world.  The reason  - it rusts easily if the iron cookware are not taken care of properly.  You can imagine the tetsubin kettle is even less popular in our rush-rush urban cities.

At this point I would like to highlight the difference between a tetsubin kettle and a tetsubin teapot. The teapot is smaller from 300ml to about 1 litre while the kettle starts from about 500ml to more than 3 litres.  The tetsubin teapot is internally lined or coated.  It may be ceramic coated or a layer of 'teflon like" material is applied to the inside of the teapot so that rust would not occur in the teapot.  You would brew tea in that teapot.  A kettle on the other hand has no coating inside, and the kettle is only used to boil water.  Yes, one would place the kettle over a fire and boil the water.  This, as I gleaned from the internet, is where the water, coming into contact with the iron surface, would make brewing tea with this water a more tasty experience.  Further information from the internet said that I should not use any detergent in cleaning the kettle and I should keep the kettle dry when not in use.

There are many websites on the internet selling tetsubin kettles.  I decided to buy a used Japanese model.  I turned to ebay.  I snagged one 2 weeks ago. You would have observed that the surface of the kettle was dotty.  The seller mentioned that these bumps are called Arare design (aka hobnail).  The seller also mentioned that there are 'nambu tekkie' manufacture marks which signifies the popular Japanese foundries in the late 60s.  This kettle holds 500ml of water. It also comes with a matching trivet - where the hot kettle can sit without damaging the table top.

This tetsubin is strangely captivating.  I realized that this kettle was a little small for my needs as I usually use more than a litre of water in one tea brewing session.  So......I got myself another larger Japanese one today.  "Whoa !".  Stay tuned.