Traditional 50 Packets Of Tea In A Tin 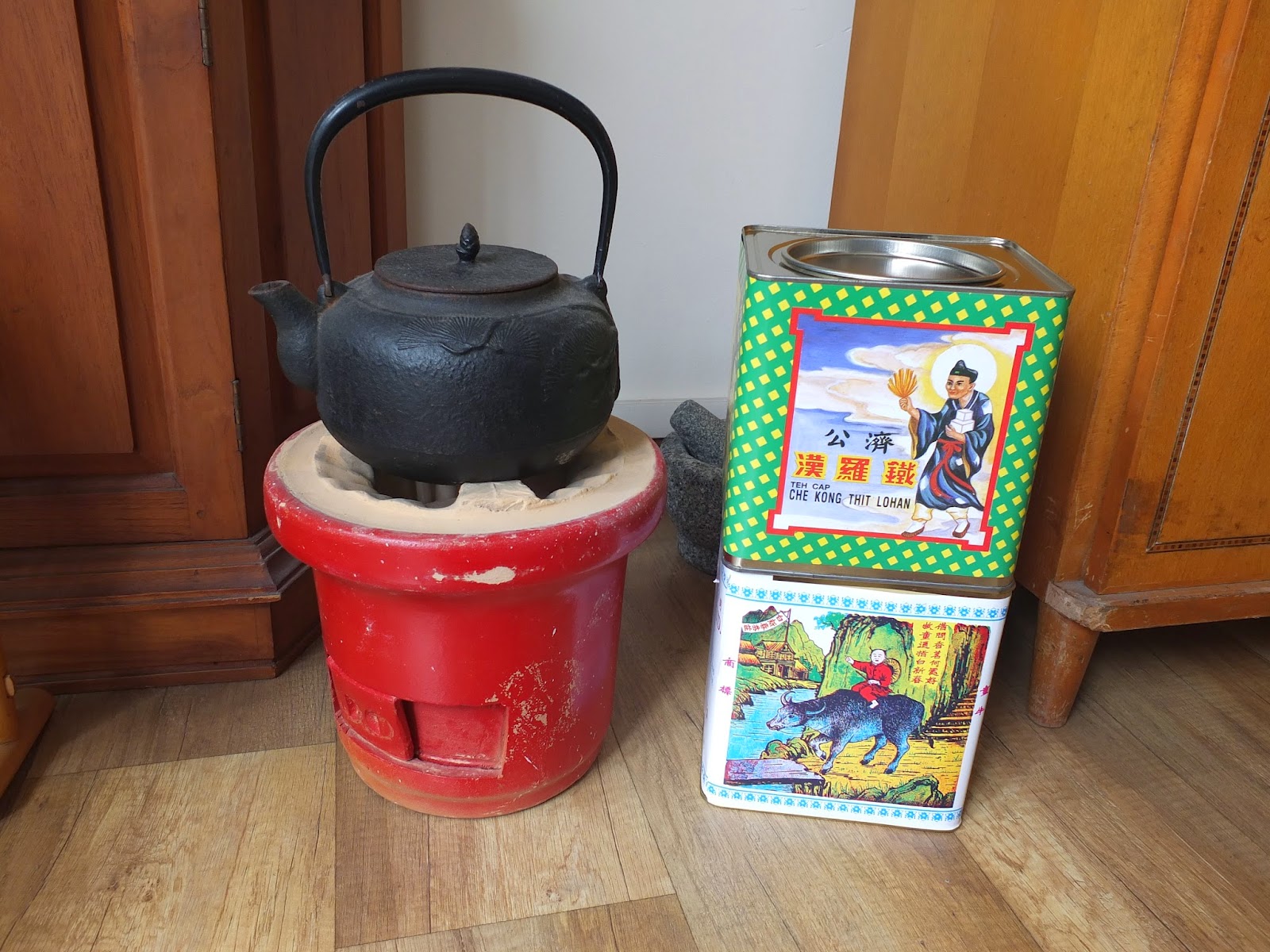 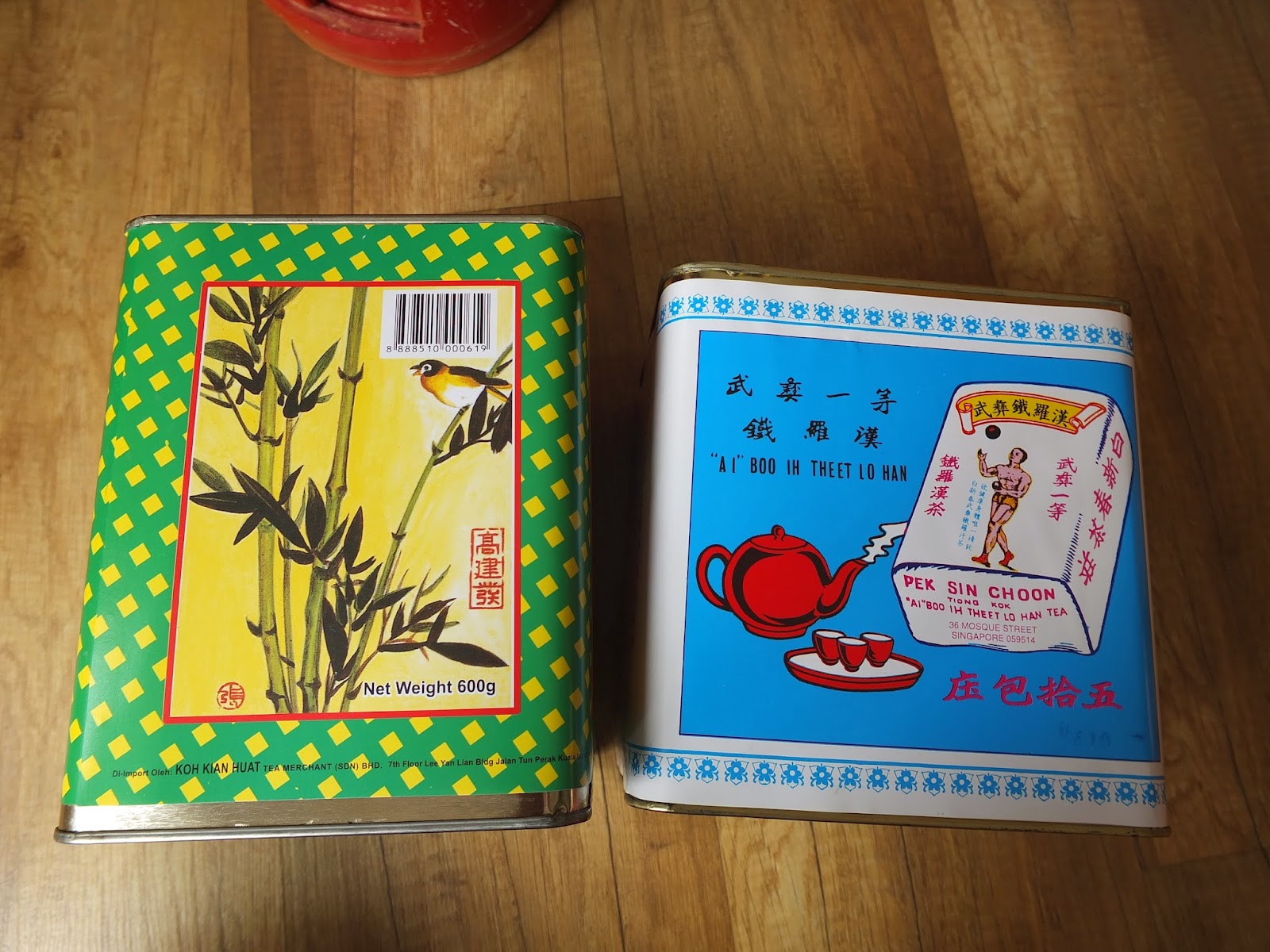 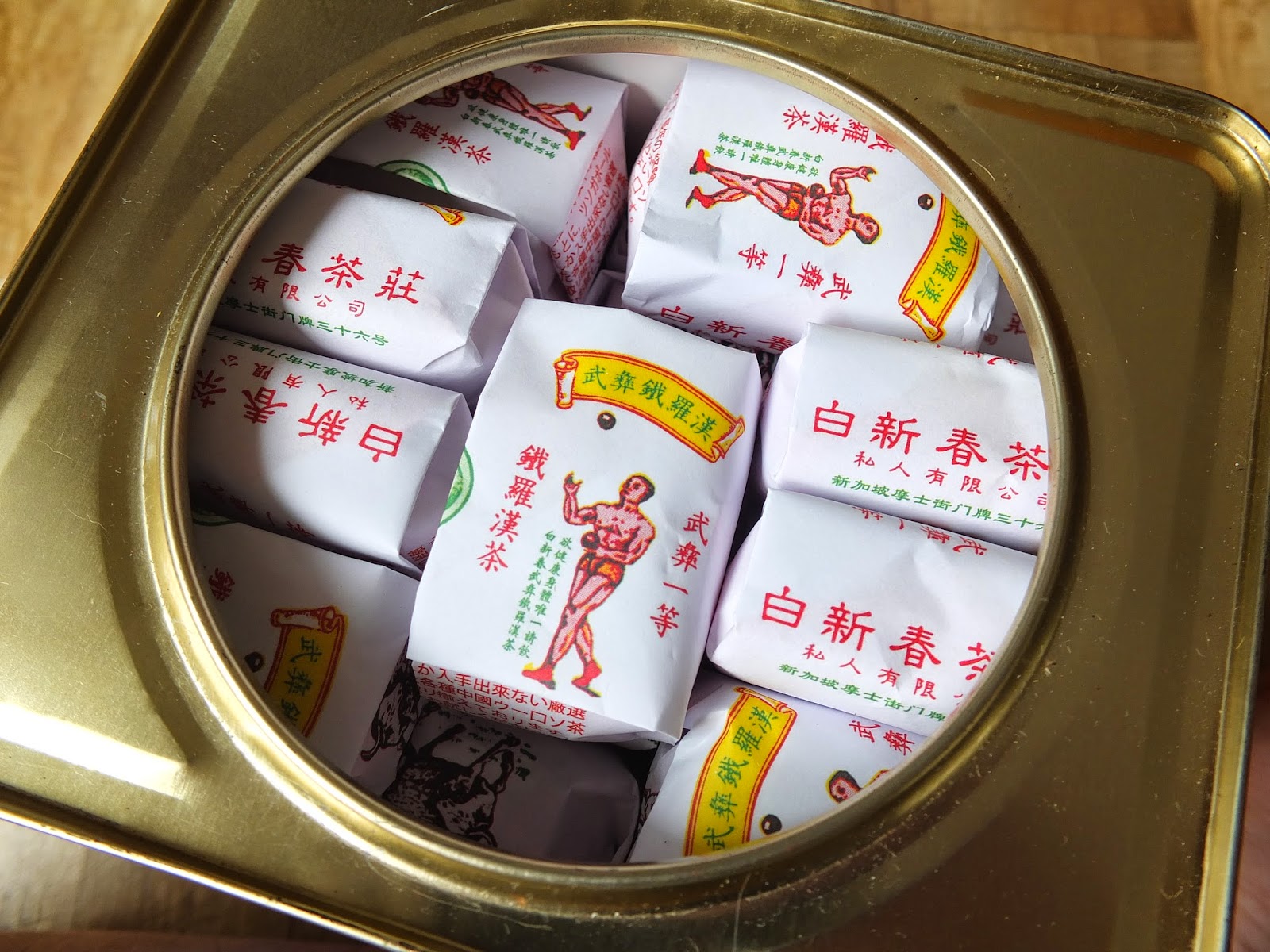 Pek Sin Choon is located in 36 Mosque Street (Chinatown).  Established in 1925, this company is the major supplier of Chinese tea to eating establishments.  Most of the bak kut teh stalls (refers to pork rib soup) that offers Chinese tea will normally be carrying Pek Sin Choon supplied Chinese tea.  I will devote a blog on such stalls later this year.

Koh Kian Huat Tea Merchant is another Chinese tea supplier.  This company was founded in 1918 and is  located in 531, Hong Lim Complex #02-38 (in Chinatown too).

I liked these 2 teashops as they are still continuing the tradition of packing their tea in small paper wrappers and packing them in a metal tin.  As you will observed from the pix, a tin of tea will have 50 hand wrapped tea packets (12g per packet or 600g per tin).  Oolong tea are usually packed in such tins and you have a choice of Tie Guan Yin, Shui Hsien or Tie Lo Han.

I purchased the Tie Lo Han oolong from these two shops.  The Koh Kian Huat version was on the heavy roast side.  Woody character with a mild sweet aftertaste.  The Pek Sin Choon oolong roast levels borders between heavy and medium roast.  It is more fresh tasting in character due to its lighter roast.  I brewed these two teas during Chinese New Year last week and my guests even requested for a few oolong packets to bring home.   A happy testimony of these tea.

Yes, readers.  This is the Japanese tetsubin which has the rust issues inside the kettle.  I will work to get this tetsubin operational again. 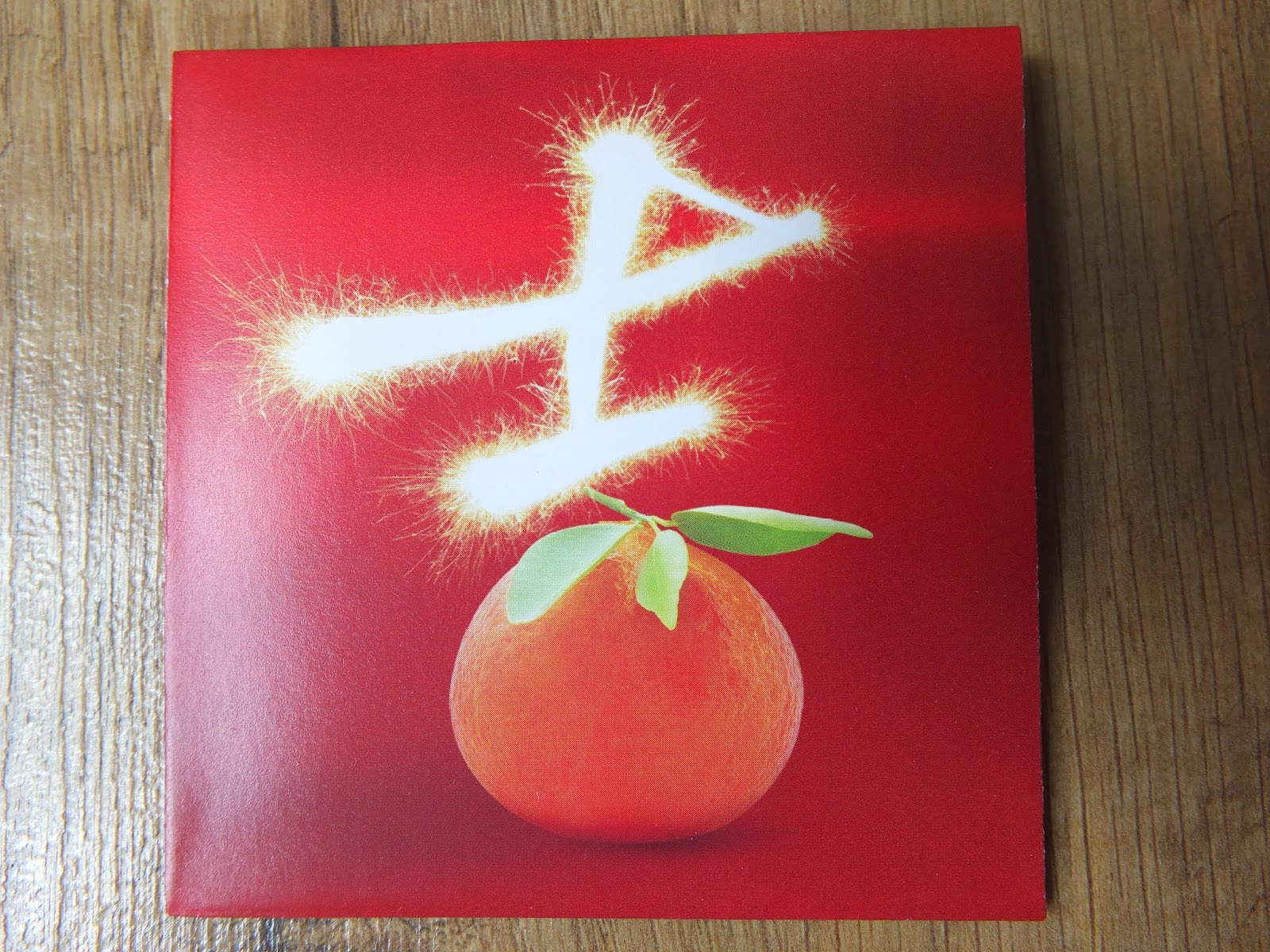 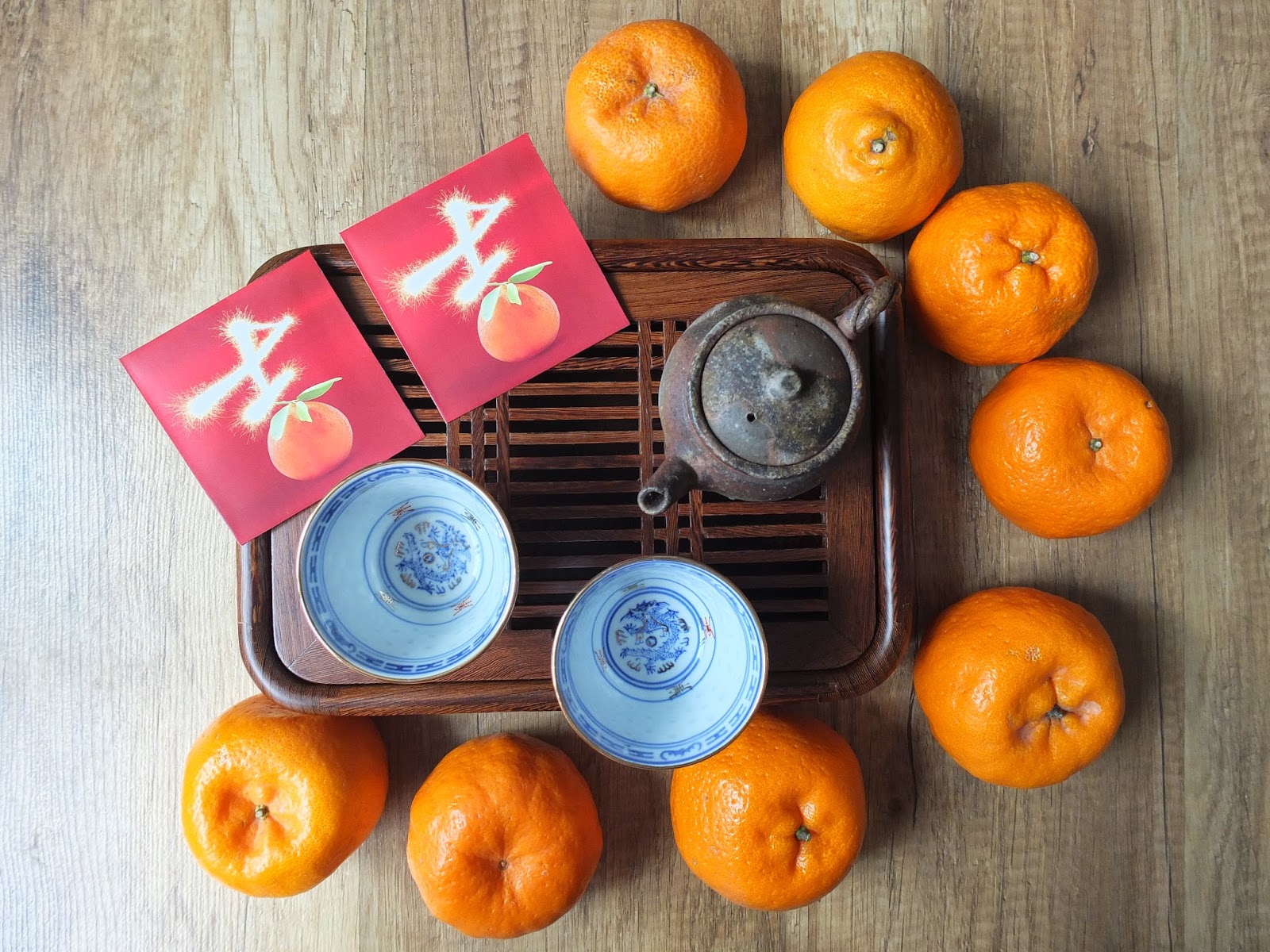 I wish all my readers Happy Chinese New Year.  Today is eve of Chinese New Year and it is a tradition that every Chinese will try to be home for the traditional new year eve family dinner reunion.  Of course, mothers and grandmothers will whipped up delicious dinners.  No we do not have turkeys for the dinner, but most families will have traditional Chinese dishes.

I had managed to join a group of local tea drinking friends (we hardly meet) and we have started a yearly gift exchange, where everyone contribute a tea or tea ware and we get one exchanged gift after our tea gathering session.  Yes, I would like to do a gift exchange with my foreign readers as well, and if you are interested….let's do a gift exchange (maybe restricting value to under $20).  One more thing….I will be in Hong Kong and Guangzhou this coming spring ...…any one wants to join me for a week of tea adventures?  Drop me an email.

Time to go for my family reunion dinner.  Happy New Year.  I wish everyone happiness and good health. 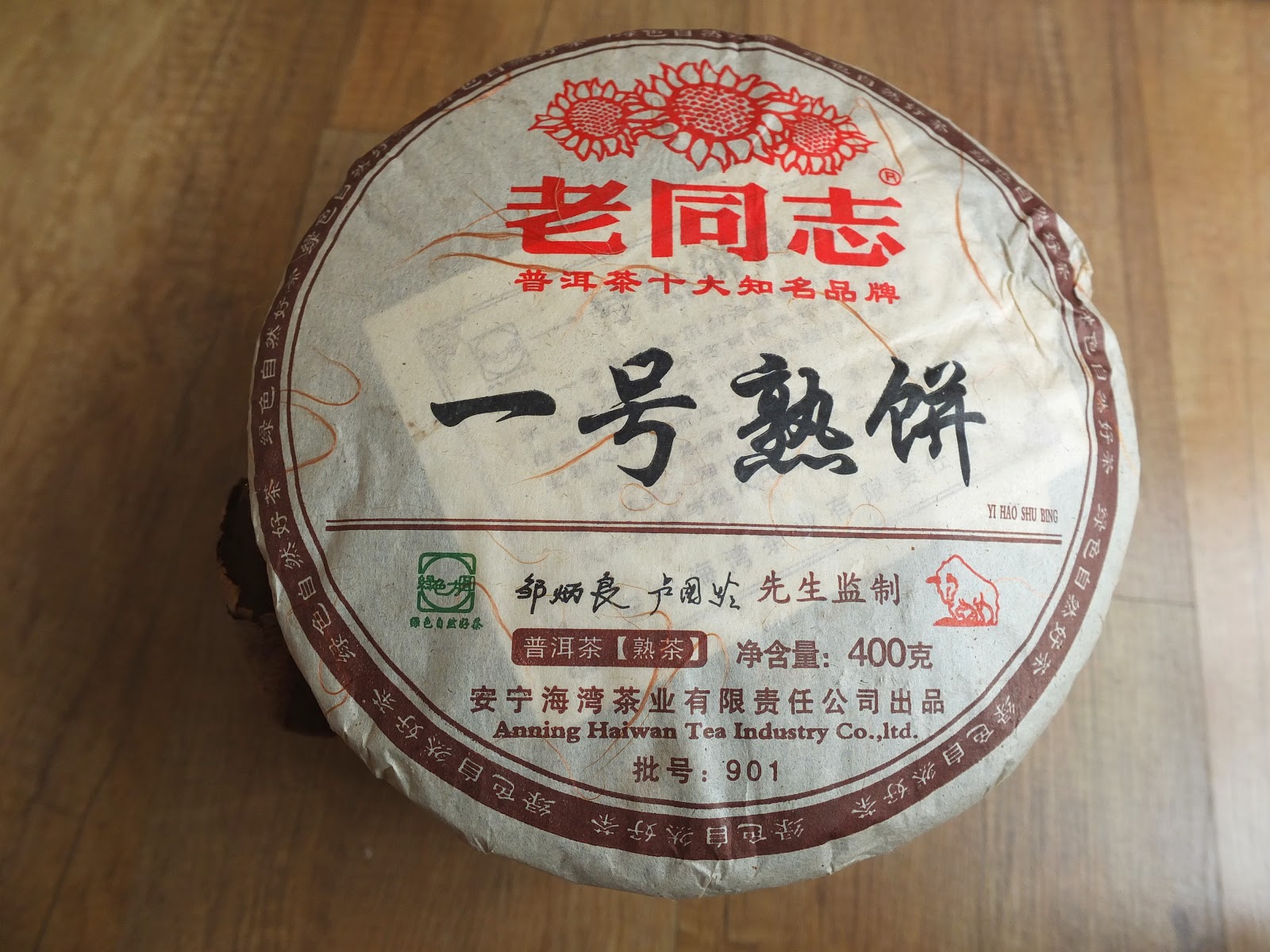 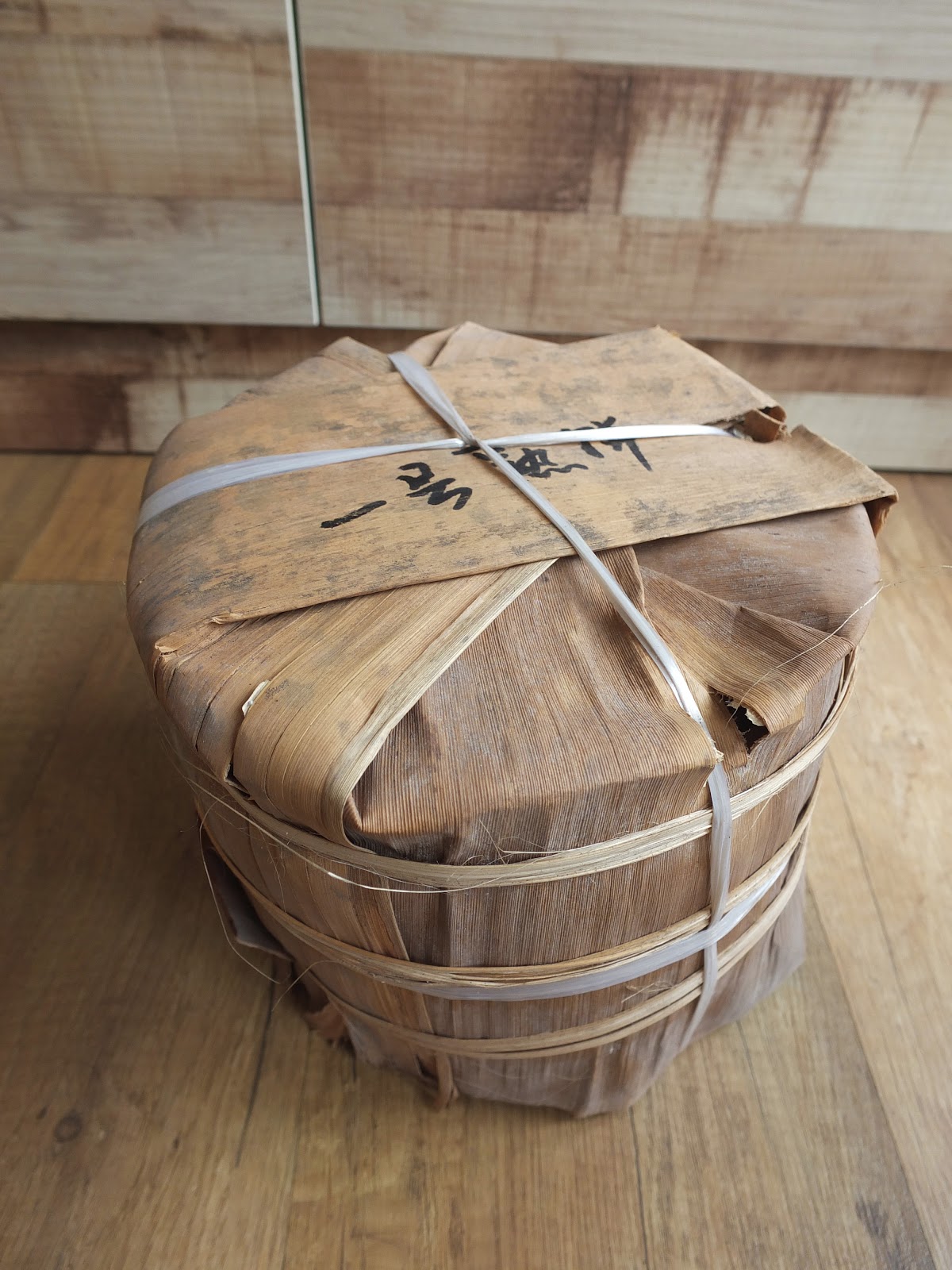 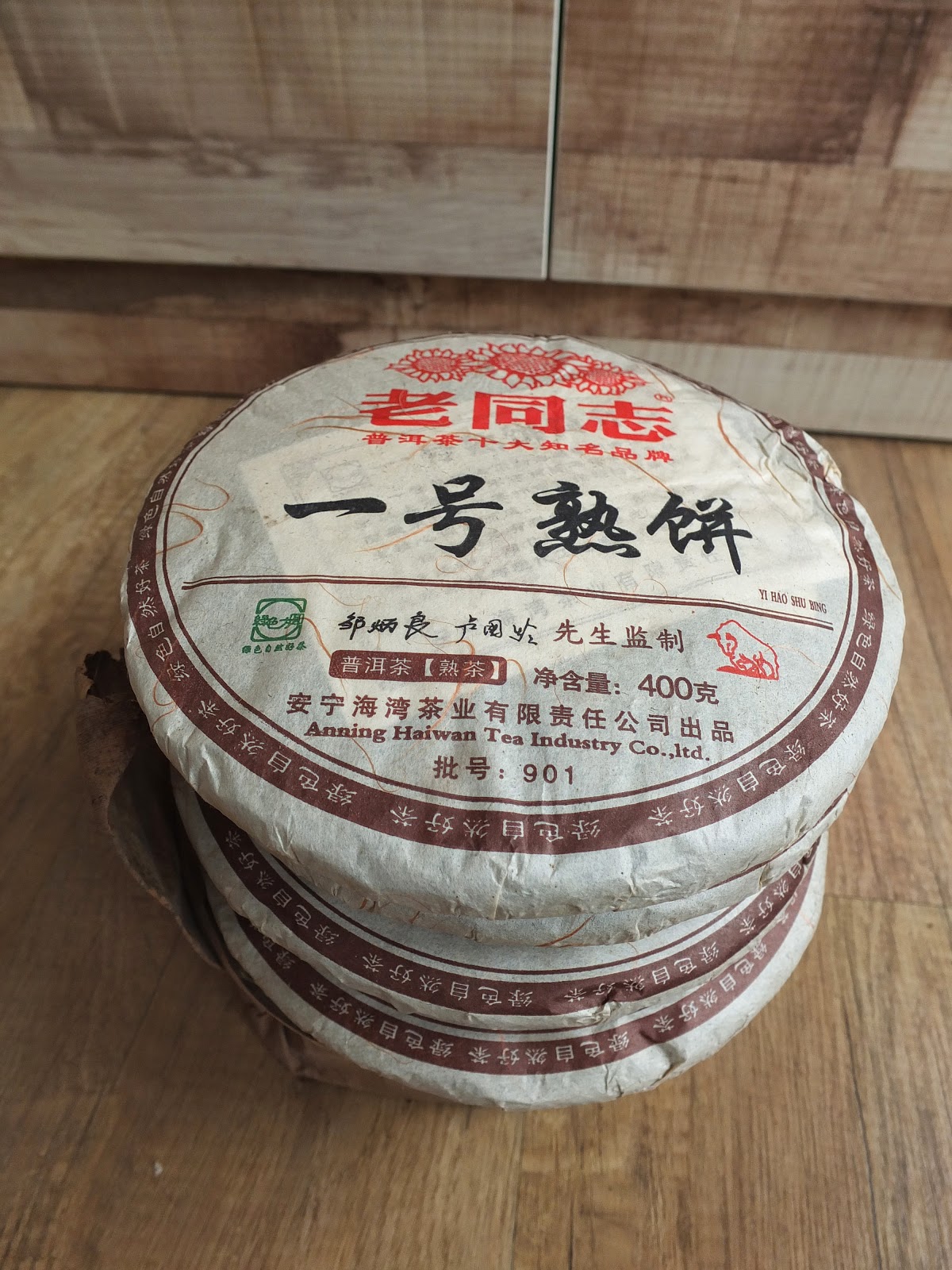 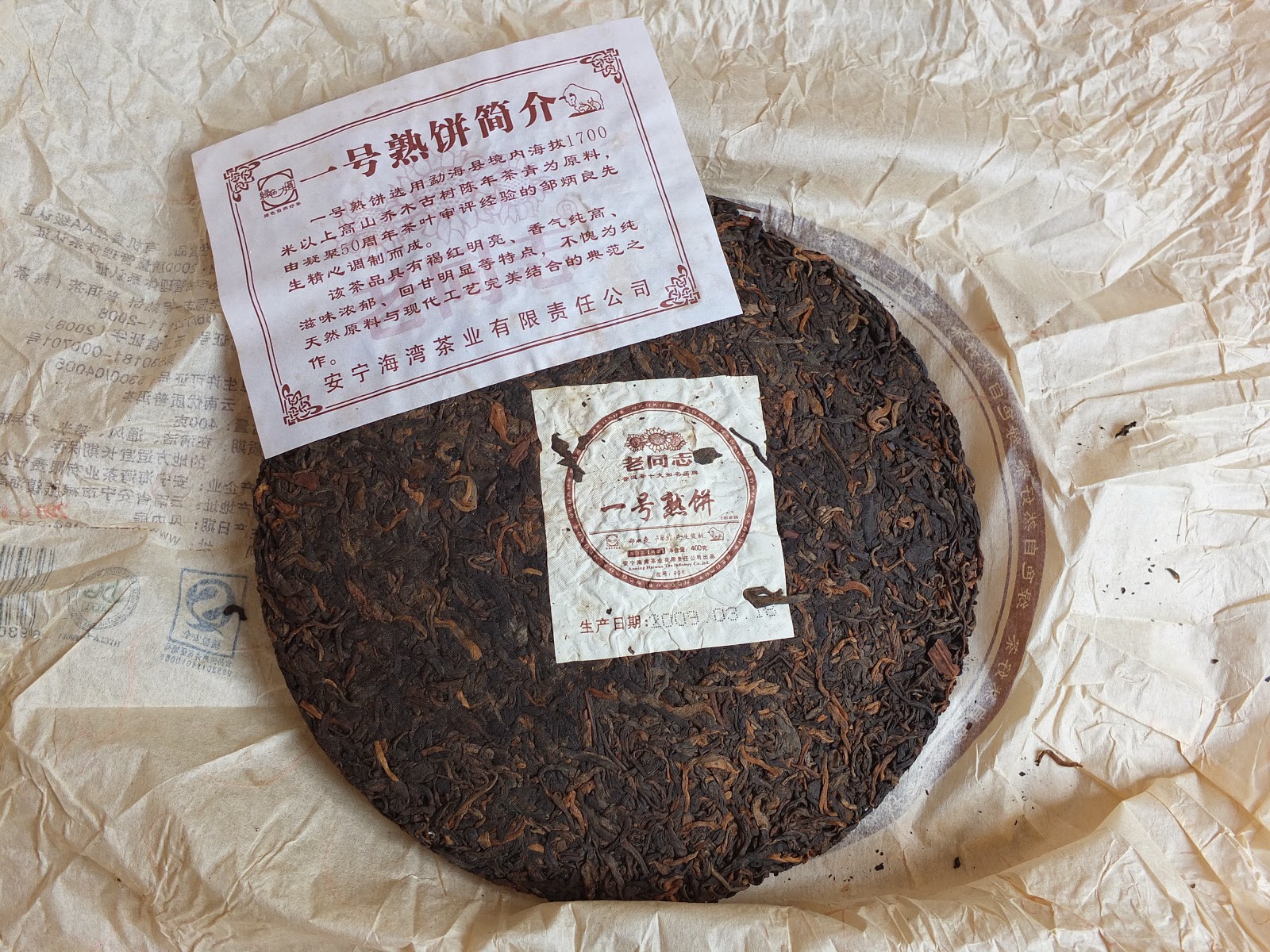 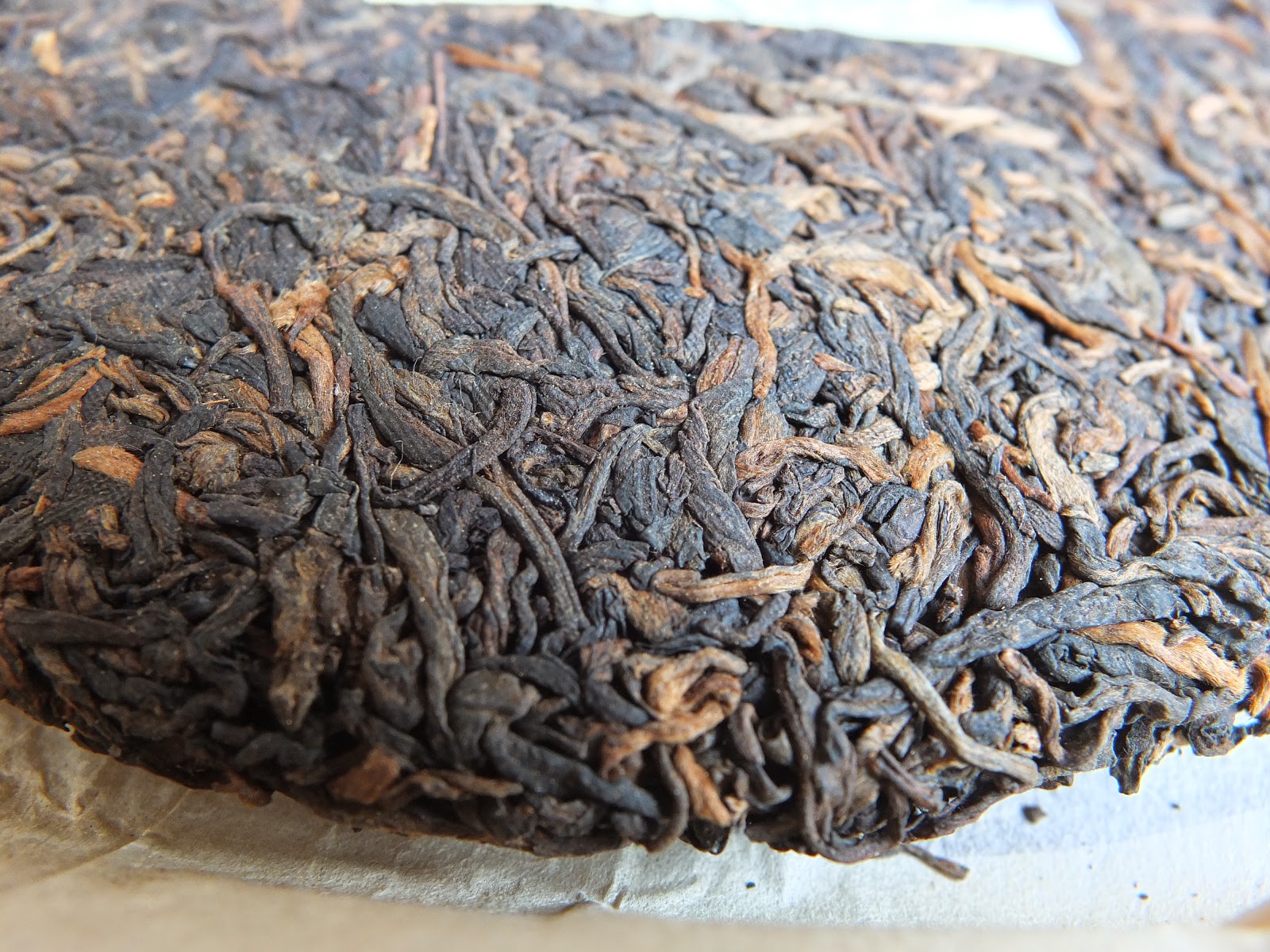 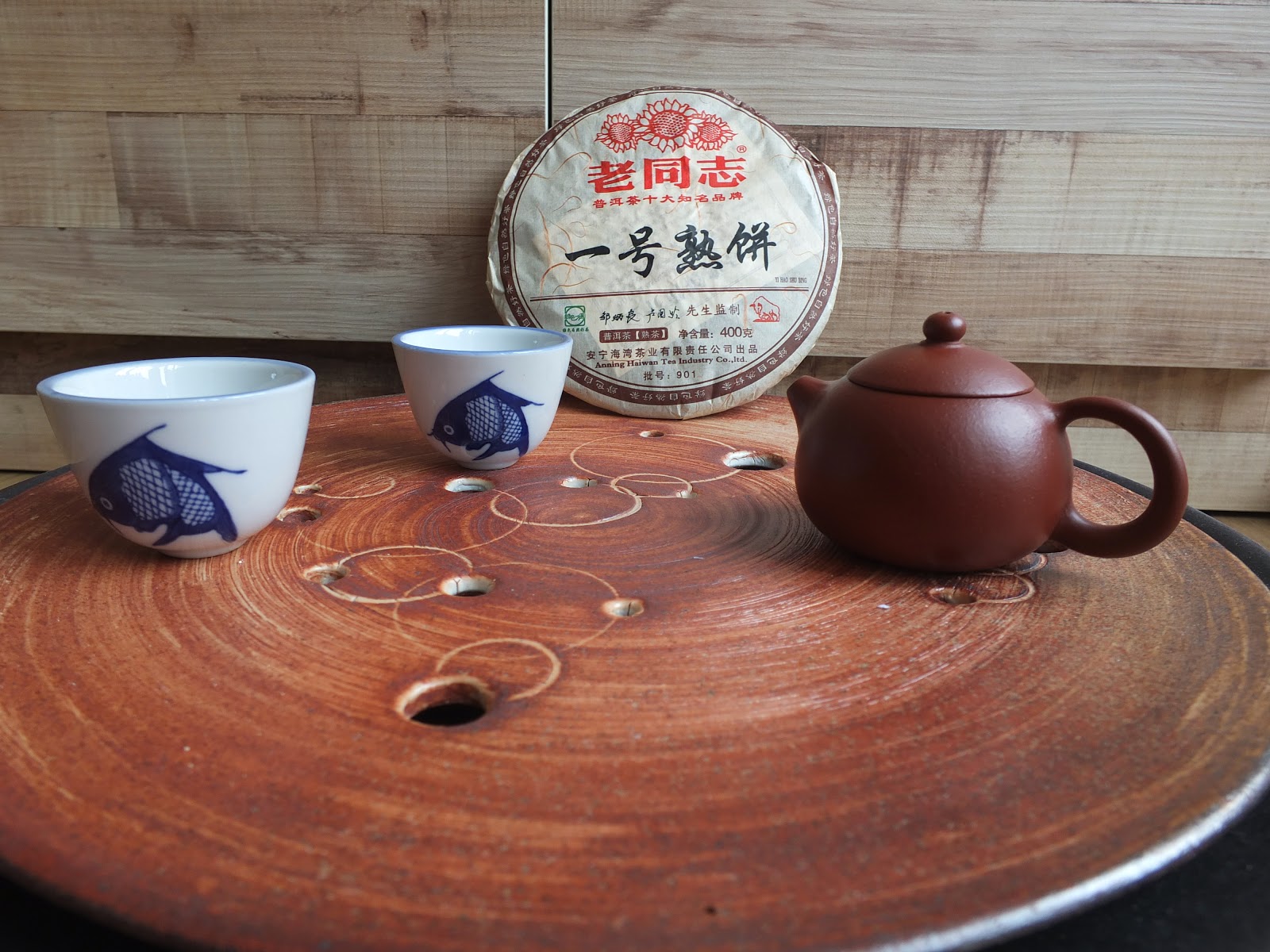 Haiwan Tea Factory in 2009 started a premium range of pu erh tea to cater to the growing number of tea drinkers and collectors worldwide.

I was fortunate that I was in Guangzhou in spring 2010 and was introduced to this range of tea while I was at the Haiwan teashop there.  The prices of these tea, at wholesale prices was considerably higher than other brands' new tea offering.  Yes, I bought some…8 tongs (link).

This No.1 tea recipe was concocted by Mr Zhou Pin Liang (president of Haiwan) and Ms Lu Guo Ling, both are very well known in the pu erh tea industry.  Mr Zhou (was the director and production manager of Menghai Tea Factory before he ventured to form Haiwan Tea Factory with a few colleagues) was also accredited with inventing shou or ripe pu erh tea in the early 70s.

But I digress.  Buying an expensive tea, like paying 3-5 times the price of the current tea you are drinking, does not mean that the taste and aroma of the pricier tea will be amplified 3-5 times.  You would (if you are a knowledgeable buyer) be willing to fork out a higher sum for a particular vintage that appeals to you.  Different types of tea, coffee, wine, or even cheese will appeal to different people.  Yes, better quality products and ingredients will cost more.  Conspicuous consumption costs even more.

Back to this tea.  This tea brews strong.  This tea has a very nice sweet aftertaste with a pleasant herbal and 'fresh bread' aroma.  This 400g cake will keep me very happy for 1-2 months.