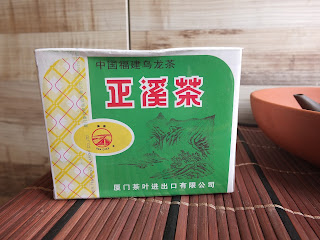 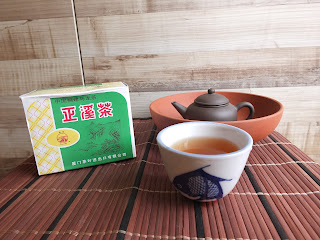 Tsen Chi Cha is a oolong tea produced in Amoy China.  This version is the Sea Dyke brand.  This tea is packed in a metal foil bag and packaged in a paper box.  This tea had been produced for many years by Sea Dyke and is available in many South East Asian countries.  They are commonly found in Chinese tea shops or Chinese emporiums.  I remembered I saw this tea at a Chinese tea shop in San Francisco and Toronto as well.

I was in at Yue Hwa Emporium, Hong Kong last  year browsing at the Sea Dyke tea section when an elderly man came to the same aisle and picked up 2 boxes of this tea.  I asked him why he had chosen this tea.  He replied that he drank lots of tea (oolong, puerh, longqing), but because he lived in a very small apartment, he only had a small shelf for his tea.  When he had finished his stash, say oolong, he would replace them.  He mentioned he does not buy to store his tea long term but buy to drink.  He smiled and went off to pay, not before telling me that this tea was good.  I bought a box of this tea.

This tea brews up 5 good infusions.  It is high roasted and has a taste and aroma like a hybrid shui hsien and a tie kuan yin.  Nothing sophisticated or extraordinary but the traditional roast and comforting aroma made this tea a value for money purchase.   I can understand, when I sipped this tea at home, why the Hong Kong gentleman liked this oolong. 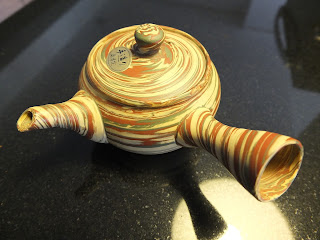 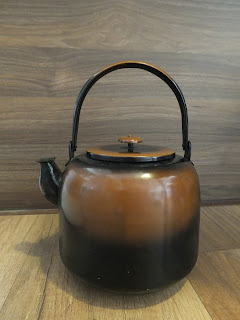 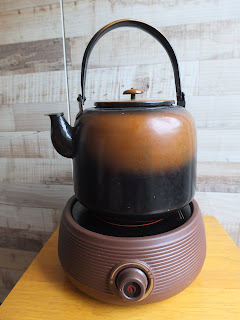 The teapot you see in the 1st pix is a teapot with a side handle.  Teapots, known as Kyusu in Japanese, are used in brewing tea and are traditionally brewed on floor mats or on very low tables.  The teapot shown is made with Tokoname ceramic and employs the Nerikomi style of kneading patterns with coloured clay.  You can understand my fascination with this teapot; the colours are very hypnotic and I could stare at the teapot for a good few seconds.  The height is about 2.8 inches and I am guessing its capacity at about 150ml.

I had also purchased an old copper kettle.  Kettles or Yakan in Japanese, often used for brewing Japanese tea, are usually made from iron or copper.  Iron kettles or tetsubins from Japan are much appreciated by tea drinkers all over the world for its artistic styles and the 'smooth' water when used with such tetsubins.  Japanese copper kettles are less famous but I was intrigued by the design of this copper kettle.  This design is known as tanuki or racoon style.  A story tells of a racoon, who made itself looked like a kettle to avoid capture by a hunter, found itself  'smoking' when the hunter placed this 'kettle' over a fire.

This kettle can easily hold 1.5 litres of water.  I had already tried using this kettle but found the water less tasty than a tetsubin.  Maybe I should had washed the kettle thoroughly.

But I digress.  I would be in Guangzhou in the last week of Sept.  I would welcome any readers to join me for a week of tea adventures in the tea markets of Guangzhou.  Breakfast not included. 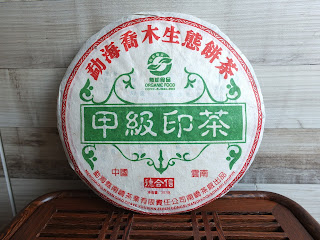 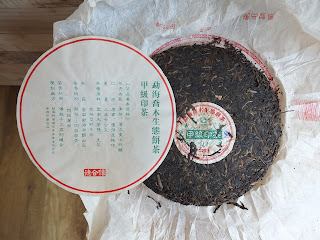 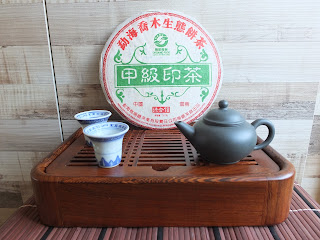 My Malaysian friend and I had bought this tea 5 years ago at a Malaysian teashop.  We had sampled  this and found the tea to be very strong but new in 2012.  My friend and I decided to buy a carton each for slightly better price.

I met this friend early this year and he was quite excited over this tea.  He had been sampling this tea every 6 months since our purchase and he found that this tea had 'turned' this year.  The term 'turned' is just a name used among my Malaysian friends that described a pu erh tea that seem to mature/age significantly or suddenly.  Let me explain.  There are some pu erh tea that, when you had bought them and stored them away, the taste and aroma do not seem to change for a few years since the purchase.  I had noticed that, there are some pu erh tea, when they turned about 8-10 years old, will taste and smell slightly different.  The mellowness and smoothness of the tea seem to be more pronounced.  There is a mature taste in the tea as well.

I have a old Chinese tea collector in Guangzhou, that had explained to me his thoughts; that pu erh tea will change in both taste and aroma in phases, about 10 years per phase.  He claimed that the 2nd phase would see the pu erh tea take on a more medicinal character in the brew.  I had tried a few of his much older cakes as well as 20 year tea cakes at teashops and I can attest to some medicinal aroma in these tea.

This 'turning' phase is something that many pu erh tea drinkers and collectors look forward to when they store and age their pu erh tea.  The pu erh tea may become more floral or more herbal or even may developed a camphor aroma in the tea after some time in storage.  These changes in both aroma and taste, in my opinion are due to the tea leaves and the storage conditions of the tea.  When you and I buy older pu erh tea, we are also indirectly  buying the time as well as buying the storage of the tea.

De He Xin is a well known teamster in China.  He had produced a raw (this tea) and a ripe pu erh tea cake in 2006.  This tea, as described in the note enclosed with the cake, are composed from Bulang region.  De He Xin had also had this tea certified that it  met the organic label requirements.  I do admit that the tea had 'turned'.   The tea is now more vivid in both taste and aroma.

What do I advise a few of my readers that had posed me a question about whether to store away tea for 10 years or buy a 10 year old pu erh tea outright.  My answer, do both if possible.  I find that pu erh tea stored in various countries like Malaysia, Hong Kong and China will have their unique storage characteristics that cannot be easily replicated in a home if you stay in a temperate country( your tea will have its own unique storage result).  For me, that is the fun in trying all these pu erh tea and having an adventure in every cup.
Posted by wilson at 11:46 AM No comments: