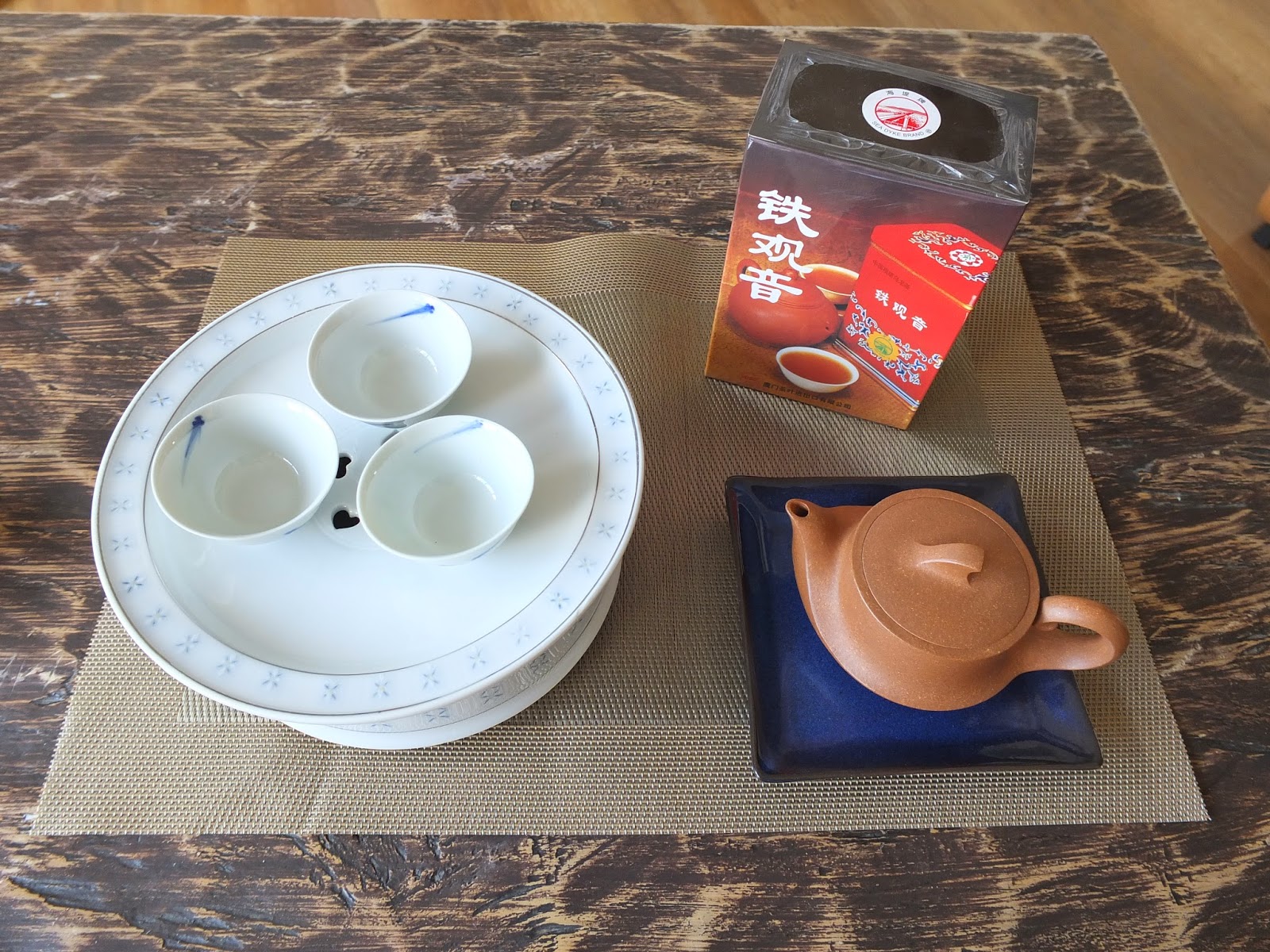 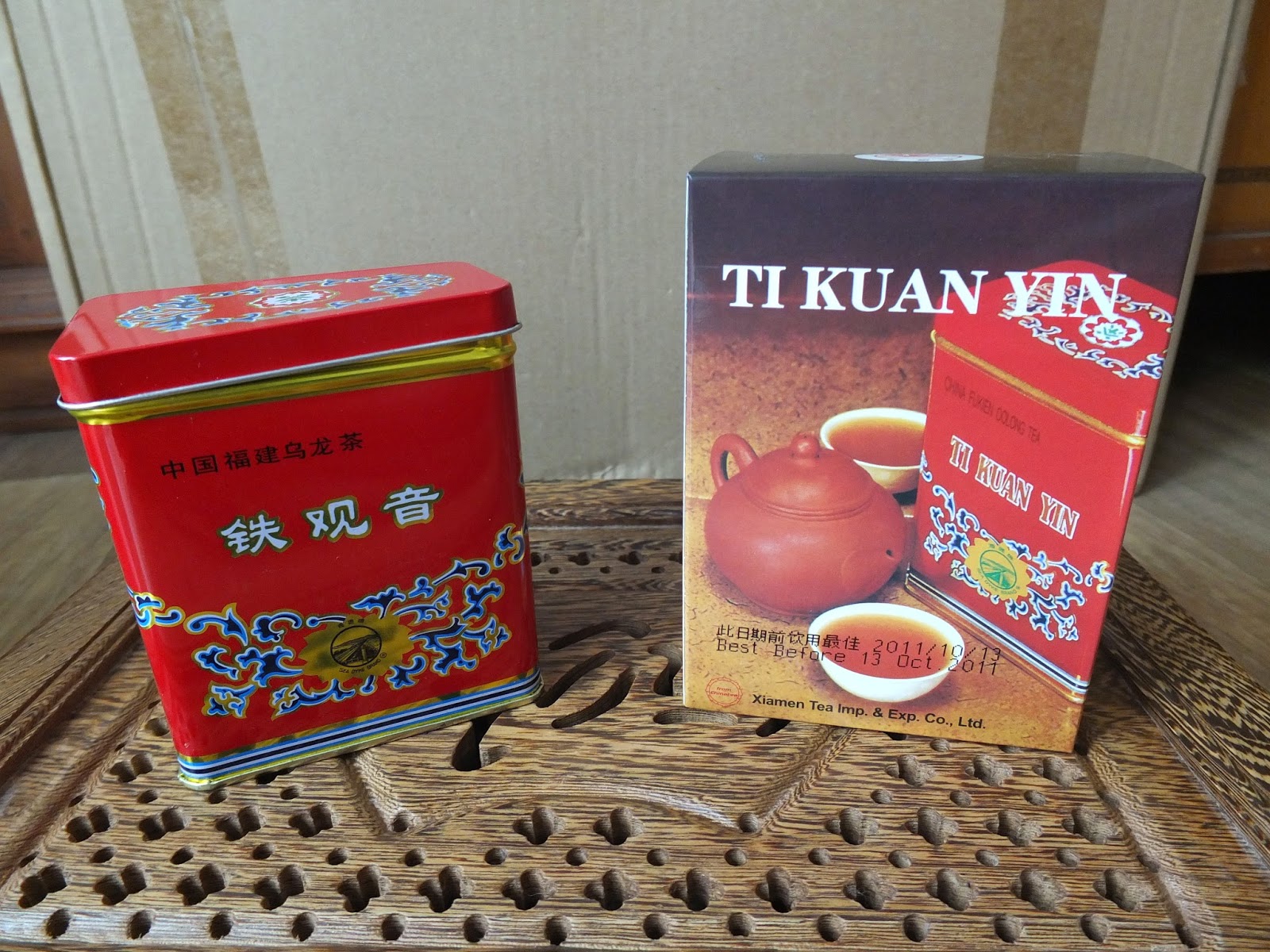 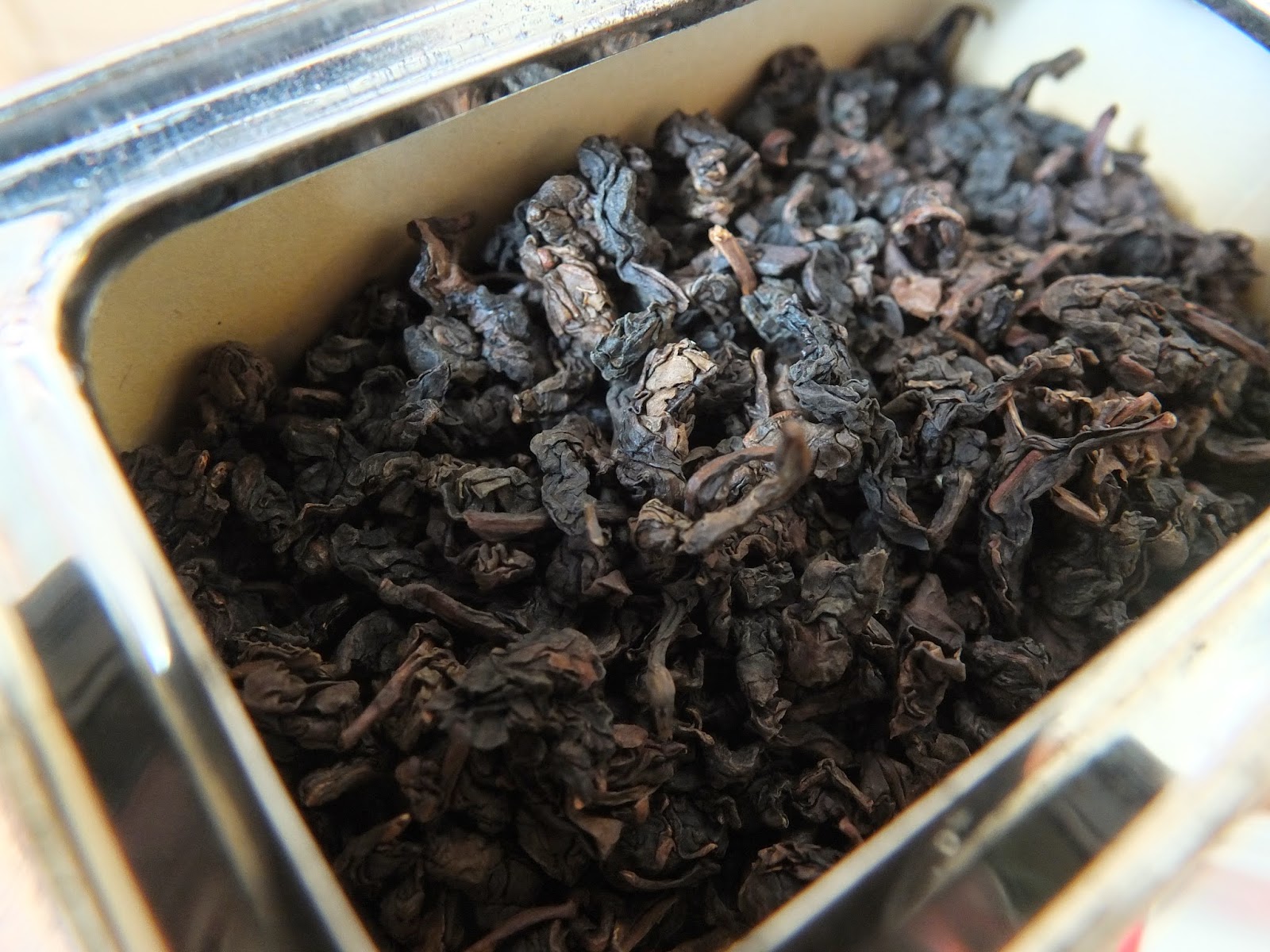 Sea Dyke Brand, under the auspices of Xiamen Tea Import & Export Co Ltd, produces many Chinese Tea and most of these tea are exported worldwide.  Some of the teas are relatively inexpensive and easily available. If you are residing in Europe or USA, a trip to your neighborhood Chinatown might be an exciting tea adventure for an afternoon.  You can also purchase these tea online and I noticed Amazon had even started to sell such tea in their stores.

Ti Kuan Yin (also called Tie Guan Yin or TGY) is a Chinese oolong tea that is produced in Xiamen, China.  There are many variants of oolongs that are produced and they have names like Shui Hsien and Tie Luo Han.  TGY is named after the Goddess of Mercy.  Legend has it that the Goddess of Mercy appeared in a dream instructing a religious farmer to harvest a tea tree behind a temple.....and this tea was named TGY and became a much loved tea today.

Sea Dyke produces a range of TGY for sale.  They are available either packed in paper boxes, tea bags or in a larger tin (with the tea prepacked in smaller packets inside).  This Ti Kuan Yin I have.....I call it the red tin version for easy reference....is considered the slightly better grade of TGY.  Going for about US$12 per tin, you get 125 grams of TGY encased in an double lidded tin.  If you work out the math, this would indicate about US$96 per kg pricing for this tea.  The paper box version are cheaper and goes for about half the price of this red tin version.

This TGY red tin as you can see from the pix had an expiry date of Oct 2011.  No worries.  This tea is a heavy roast tea and will keep very well even way past its expiry date.  In fact, asking prices for these 'expired' tea are much higher as tea drinkers of these tea attest to a more mellower feel to the tea.  I had noticed that even in Guangzhou, there are tea drinkers looking for older versions of these tea.

As mentioned, this TGY is a heavy roasted tea.  No, you will not get the delicate floral sweet aroma of the light roasted oolongs. This tea instead has strong flavors and aroma of wood; slightly toasty and mildly bitter.  This TGY had been a very popular tea for many years and I can understand why after I had a tea session of this TGY.  It is very easy to drink especially after a heavy meal.  This tea is also just as pleasant when the tea had cooled down to room temperature.  I have a friend who like drinking his TGY chilled.  I do not regard this tea as a top grade TGY, but it is a good enough for me. 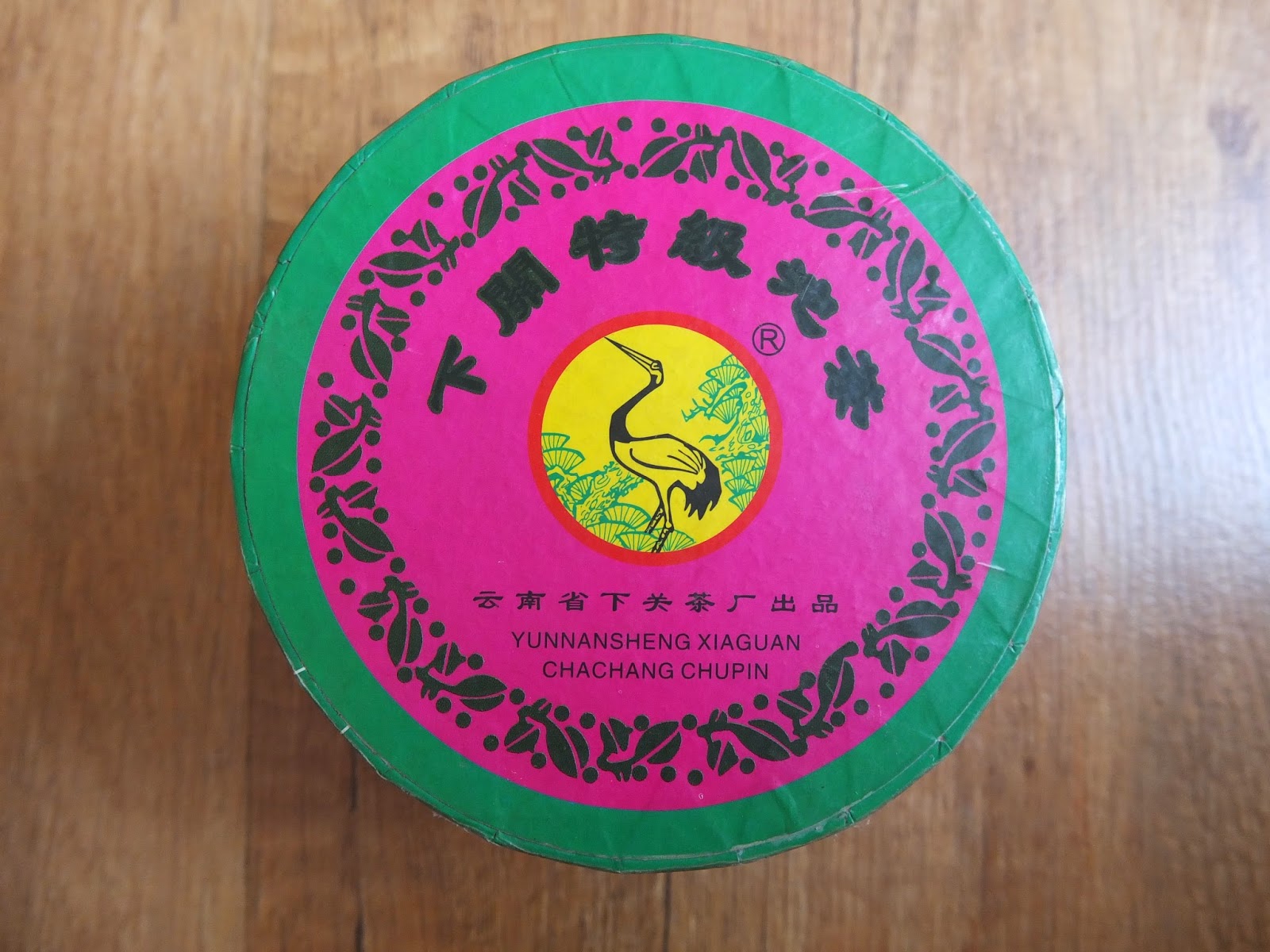 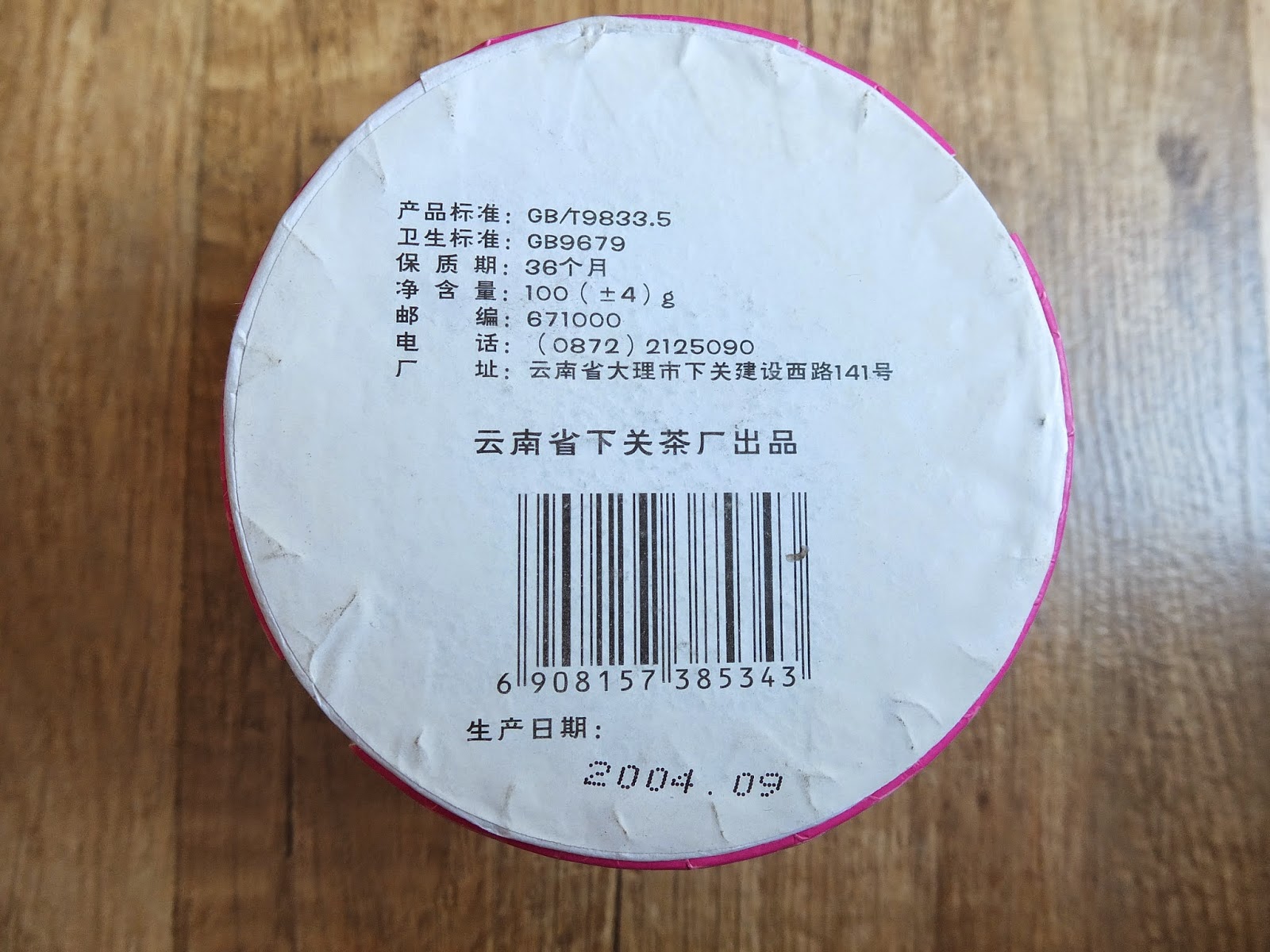 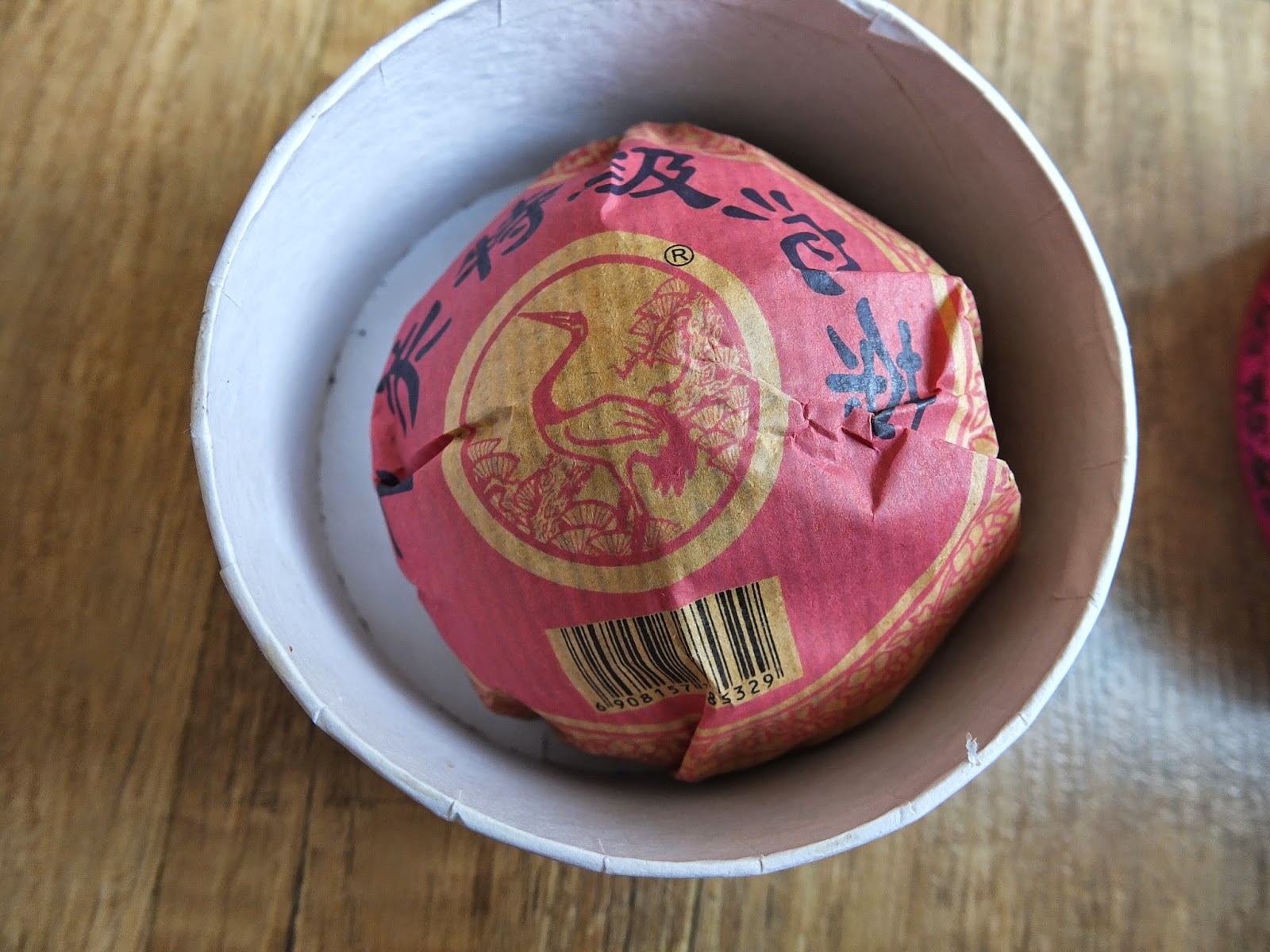 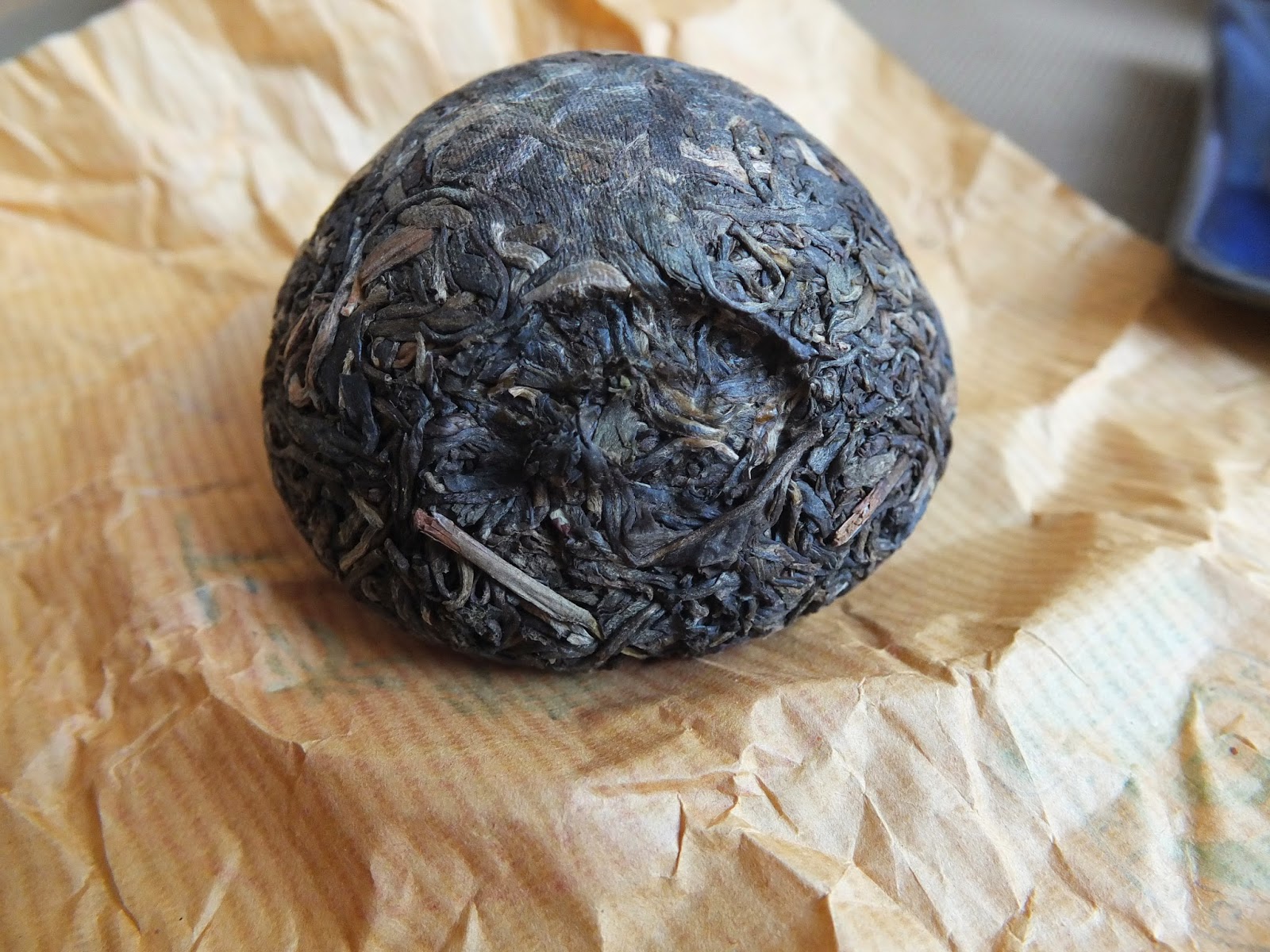 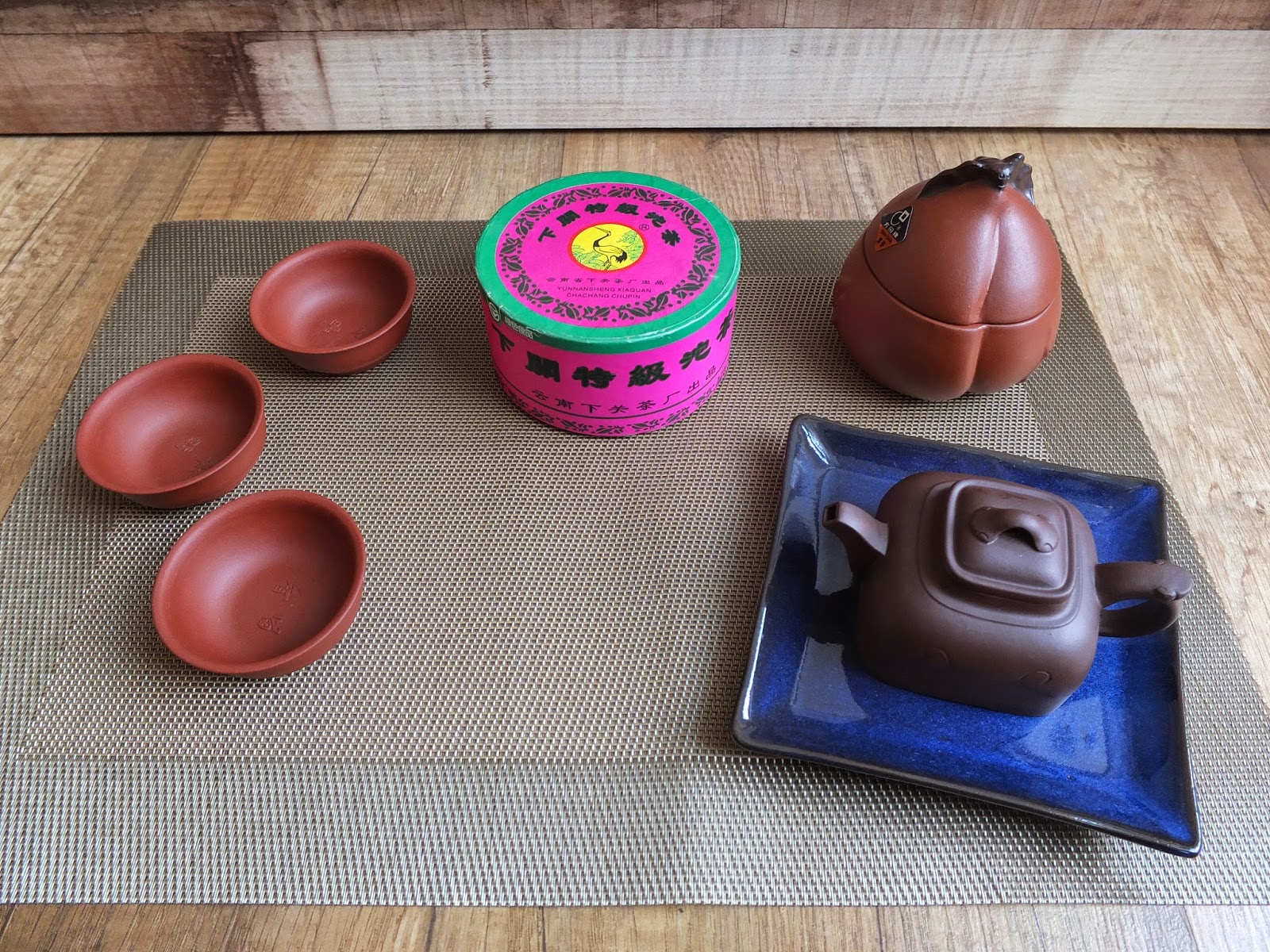 I purchased a few of these 2004 Xiaguan Te Ji tuos during my recent trip to Kunming. I had heard that the Xiaguan Te Ji in box was better than the ones in wrapper (5 tuos in a wrapper). I have the wrapper version as well (link) even though there were from 2007 instead.


I think I may have overpaid for these 2004 tuos at 80rmb each in Kunming but this was the only occasion where I had came across these 10 year old tuos and I succumbed to buying half a dozen of these tuos.


This 100g tuo is smoky. It exudes a nice dry sandalwood scent when brewed. I could detect a faint floral aroma with a tiny sweet after taste. Quite a nice tea, in my opinion.


A very enjoyable tea but I hesitate to recommend a 'buy' of this 2004 tea. You will have recalled that I had also purchased in Kunming, the 2013 Xiaguan 100g bricks (link) that had 5 year old raw pu erh blended into the production. This is way much cheaper. Both are very good teas, but the 2103 Xiaguan brick, in my personal opinion, would give more bang for your buck.


But I digress. I received a mail which the writer suggest I seem to like the big production teas like Xiaguan, Dayi or Haiwan. Yes, I do like them and writing about them does allow my readers to make notes or compare their views on the teas which they may also own or have intentions to buy. Writing on the more obscure brands, I think, may just read like a fiction book. I would like to add that I had bad experiences with these big brands as well. One of them was a 2003 Jia Ji boxed raw tuo 100g, which I had kept for almost 5 years. The tea was flat, almost tasteless. There are also some old raw teas that has the 'sabun' (malay word) or soap aroma which my Malaysian tea friends enjoy , that is found in the first few infusions of some big brand raw pu erh tea. I am really trying to appreciate this aroma....really. With so many teas in the market, it will be hit and miss for everyone..... tea drinker, tea shop and tea producer included.

Posted by wilson at 3:58 PM No comments: 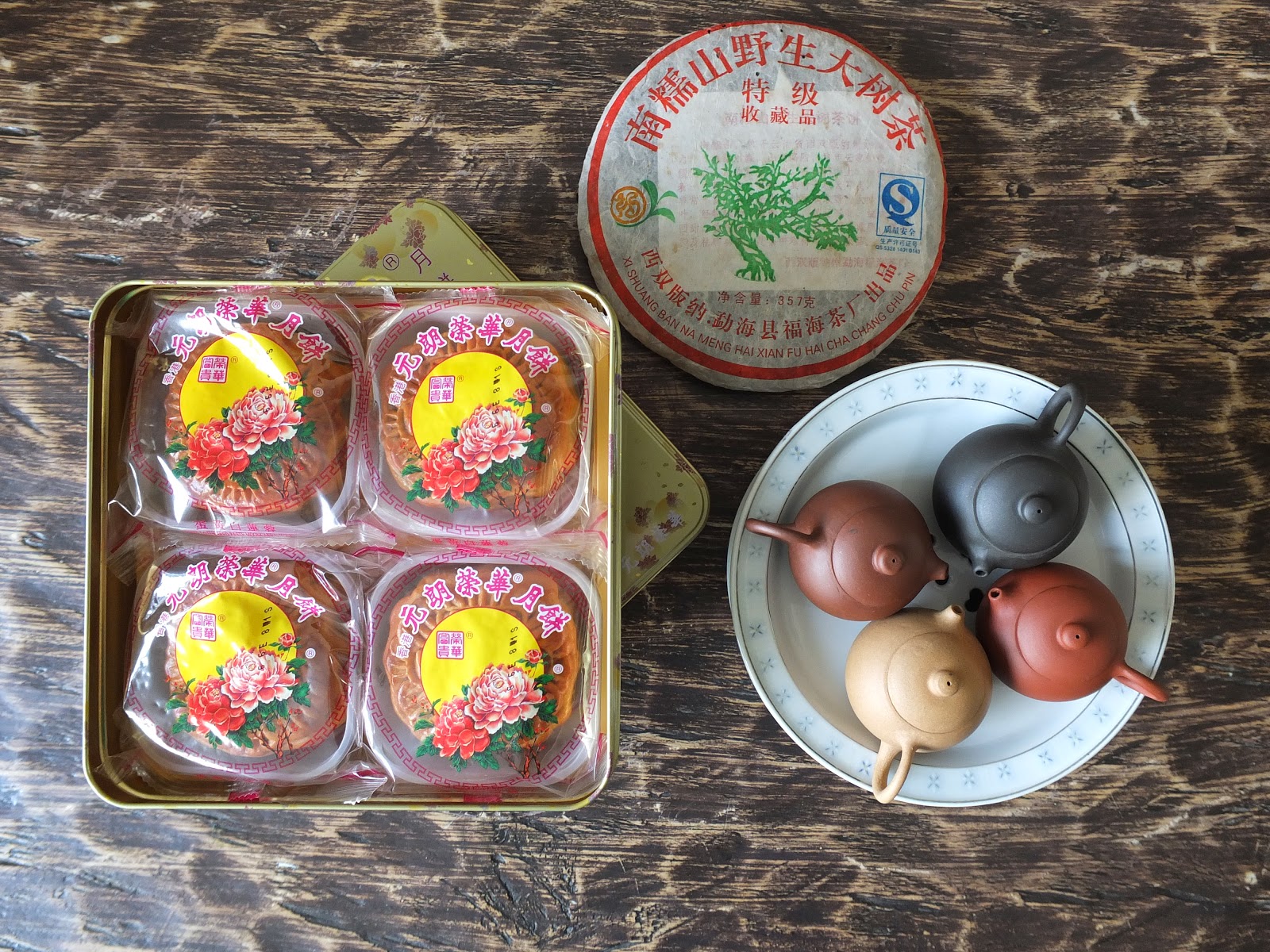 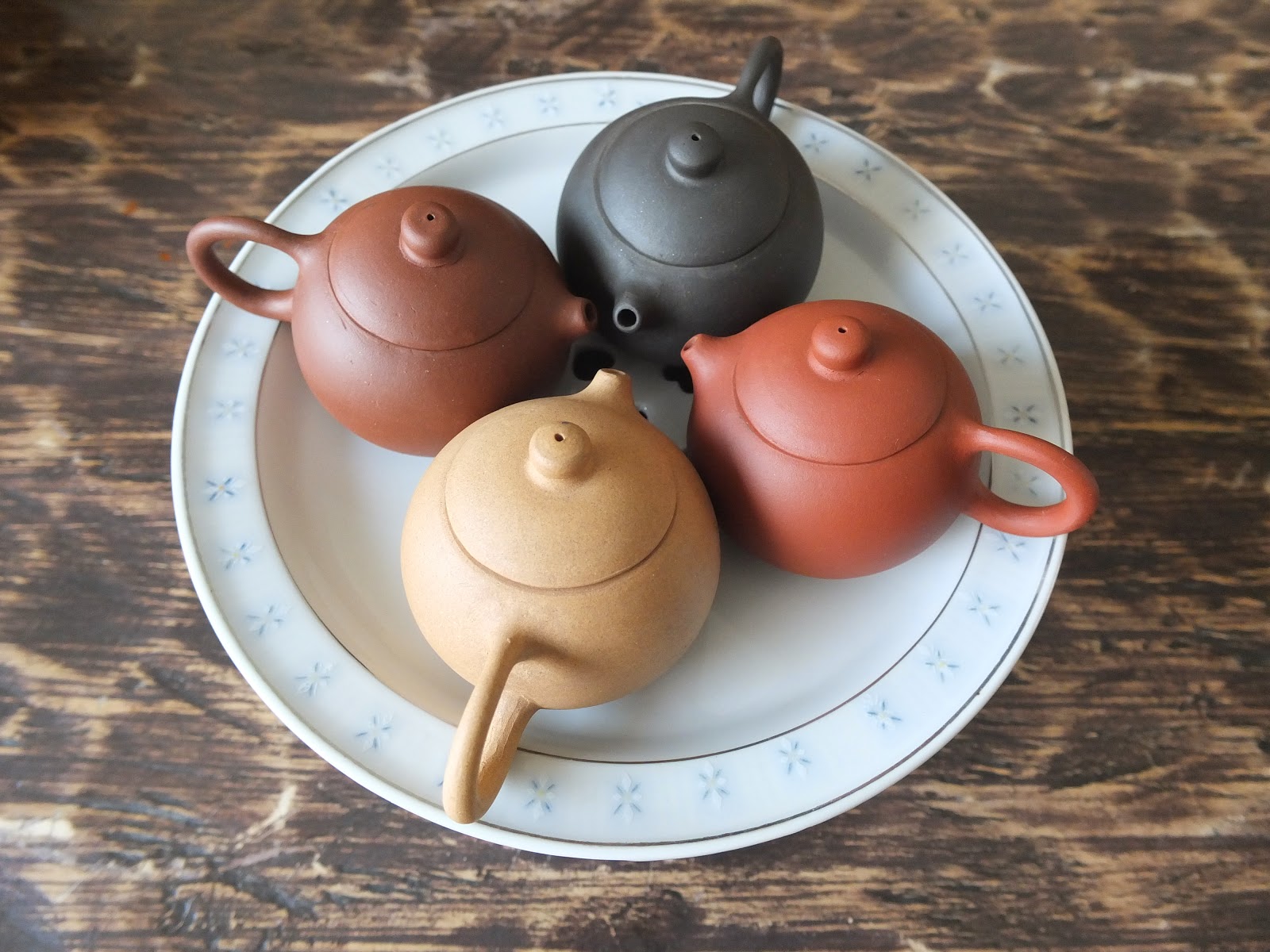 Yes, I am aware that the Chinese mid autumn is about a month's time away and that's when we are suppose to eat moon cakes.  But..... I love moon cakes and they are already available in the stores.  In fact, this box of moon cakes were from Hong Kong.

The pu erh tea cake in the pix was from Hong Kong too.  It is produced by Fuhai tea factory and was a generous gift from Hong Kong's most famous tea blogger, Marshaln whom I met early this year.

Life as a tea drinker is good.  Moon cakes and great tea. Now which teapot should I use?
Posted by wilson at 3:31 PM No comments: 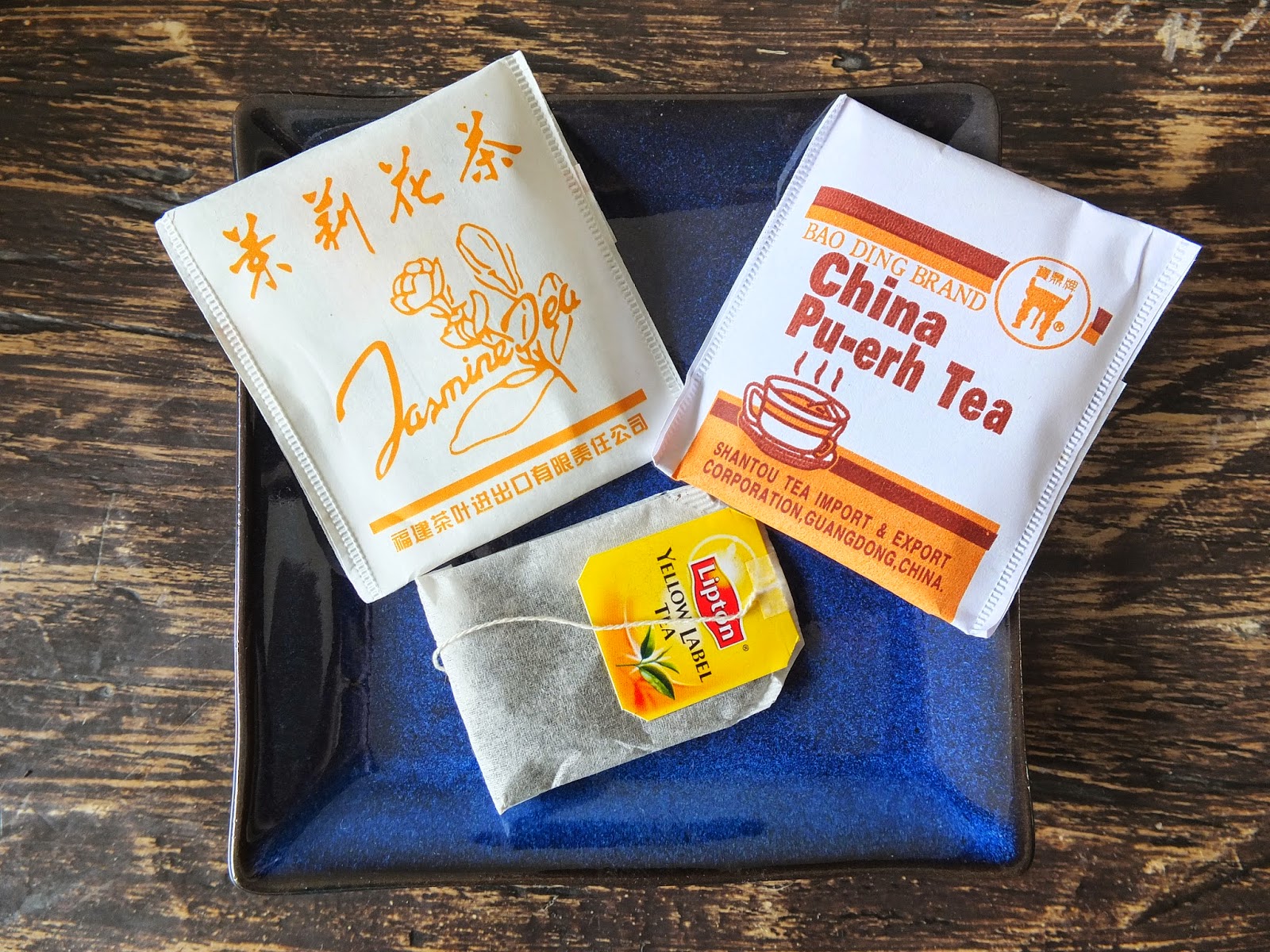 The following  article appeared in the Irish Examiner , 26 July 2014, and is well written by Dan Buckley. (link)  entitled  "What shape of tea bag should you buy for a better brew?"

It was a question that might have puzzled the Sphinx, but the answer lies in a simple pyramid.

Due to a storm in a teacup, the question of whether a pyramid-shaped tea bag or a round tea bag brews the best cup of tea has finally been answered — by the British Advertising Standards Authority of all people.

The makers of Tetley tea bags are probably wishing they’d had a nice hot cuppa instead of indulging in a mug’s game over claims that a rival product tasted better than theirs.

Tetley pitted its round tea bags against the pyramid bags of PG Tips in a complaint to the UK’s Advertising Standards Authority over a television advert.

Irish tea lovers need not worry: Tea-makers here enjoy more friendly rivalry and are not planning any such competition, with Barry’s sticking to its square bags and Lyons favouring its pyramid-shaped bags.

Tetley said the PG Tips ad, which showed the difference in ‘brewing power’ between a pyramid and a round tea bag, was exaggerated and misleading to viewers.

The ad features comedian Johnny Vegas and a puppet monkey sitting at a kitchen table, demonstrating that pyramid bags are better at releasing flavour than round ones — a claim Tetley said was untrue.

The comedian says in the commercial: “Monkey, you know how you always say: ‘There’s no other tea to beat PG’... What if you’re lying? Like when you said there was an angry owl in the biscuit cupboard?”

The monkey then makes two glass mugs of tea — one with a pyramid bag and one with a round bag. A close-up shows how the pyramid bag begins colouring the hot water, starting the brewing process quicker.

The monkey says: “PG Tips uses pyramid bags, so if we test one against a regular tea bag you’ll see the tea has got more room to move, freeing the great fresh taste for a perfect cuppa.”

Tetley challenged the claim that the PG Tips tea was superior as it had more room to move in the pyramids, thus “freeing the great fresh taste”.

Science won out and, supporting the PG Tips claim, the advertising authority ruled that the pyramid tea bag — invented in 1997 by Brooke Bond, the then parent company of PG Tips — did in fact have better brewing efficiency.

The authority said: “Unilever provided test results which showed that the infusion of tea, at 40 seconds and two minutes into brewing, was greater when using a pyramid tea bag than when using a round tea bag.

“We therefore concluded that the advert did not exaggerate the capability and performance of the advertised product and was not misleading.”

A spokeswoman for Tetley said the decision related only to the speed of infusion which was not “a key factor in determining the quality of a cup of tea”.

“Tetley’s extensive research shows that the round tea bags, combined with high-quality tea, are just as effective as other shaped tea bags. Ultimately, the shape of the tea bag is not as important as the quality and taste of the tea.”

The rivalry here between Barry’s and Lyons is more friendly, with neither tea maker throwing shapes or having a go at the other.

Nevertheless, Lyons said it has statistics to show its pyramid bags help to enhance flavour but pointed out that its bags are not the same as PG Tips, although both firms are owned by Unilever.

“The Lyons pyramid tea bag allows the tea leaves more room to move, infusing the tea with the rich golden hues of the Lyons tea blend more quickly than a standard square or round tea bag,” said a spokeswoman.

“Given that most Irish people [72%] allow their tea bag to brew for less than a minute, this means tea lovers can enjoy a great tasting cuppa more quickly,” she said, adding that the Lyons pyramid tea bag is unique to Ireland and specifically developed for Irish tastes.

For Barry’s — Ireland’s homegrown tea maker — it’s all about the quality of the leaf and the expertise of the blending. “We believe that what goes into the bag is more important than its shape,” a spokeswoman said. “The quality of great tea always comes through, regardless of the shape of the tea bag.

“The talk at the moment seems to be all about the shape as opposed to the tea. And at Barry’s Tea, we believe the quality begins with the leaf. It’s the quality of the leaf, the blend, and the expertise that goes into tea that gives Barry’s Tea its much loved taste and unmistakable quality.”

Need to have a cuppa after all that.

- In Ireland, we drink up to five cups of tea per day — that works out at 300 litres of tea per person every year.

- 72% of Irish people allow their tea bag to brew for less than a minute.

- The number-one selling tea in Ireland is Lyons Tea and it has been in Dublin since 1902.

- All tea comes from the same plant — an evergreen shrub called Camellia sinensis. The only difference is in the way the leaves are processed. If its leaves are not dried quickly after picking, they wilt and oxidise. To control the oxidation process, the leaves are dried at different stages depending on the tea type — green, black or oolong.

- The Irish tea market is worth an estimated €78m.

- Barry’s Tea accounts for 40% of all tea sales in Ireland.

* Facts from the websites of Barry’s Tea and Lyons Tea