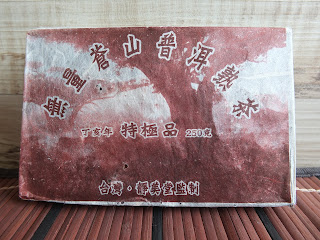 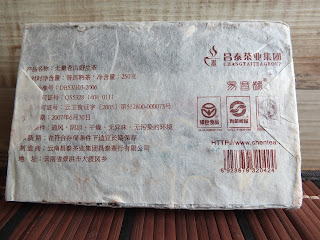 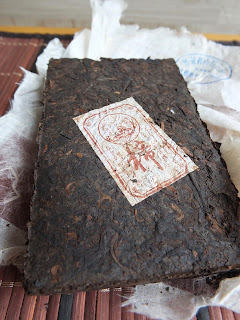 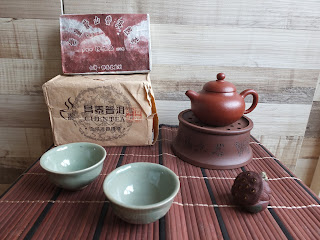 I was pleasantly surprised when I sampled this 2007 Changtai ripe brick.  This is a 2007 production and this tea had been stored in Malaysia for almost 10 years.  The 250g brick is individually wrapped and packed 4 bricks in a larger wrapper.

My readers would know that I had been encouraging readers in 2 aspects when it comes to pu erh tea:
a) breaking up a brick or cake into pieces and storing in a tea caddy for 2 weeks before drinking
b) use boiling water when brewing the tea

These 2 simple steps, in my own opinion, does make the pu erh tea (raw and ripe) more amplified in both taste and aroma.  I have tea drinker friends that only leave a cake or brick unbroken and only peeling off a small chunk whenever they want to brew their tea.  I can understand tea caddies does need space.  I would like to suggest using smaller tea caddies or tea boxes, with about 50-100g capacity, might helped address the space issue.  As for my readers using electric or stove kettles, I recommend a quick reboil prior to every infusion.  As the water is already hot, such reboiling should take less than 30 seconds.  These 2 steps would make your pu erh tea session more yummy.

Back to the Changtai tea.  I could get about 8 strong infusions from a tea session.  The tea is mellow and smooth with nice earthy herbal notes with a faintly sweet aftertaste.  Happy days. 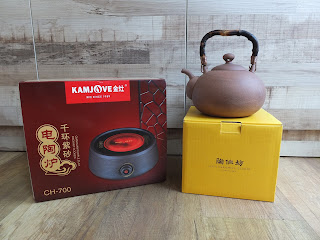 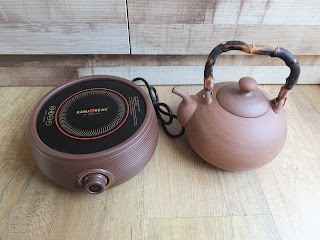 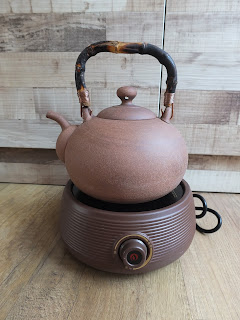 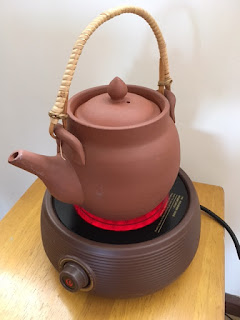 I had plans to have a new 'boiling water' setup and had purchased these items many months ago.  Procrastination crept in.  The kettle in the top pix, which I had bought in Hong Kong about 18 months ago, is a Lin Ceramics model.  This is a 1.4 litre kettle.  A similar kettle was also used at Lau Yu Fat teashop in Hong Kong. The shop had been using these kettles for a few years and I had been impressed with the performance, durability and the 'smoother' boiled water from the kettle.

I had also purchased an infrared cooker.  Made by Kamjove, China, this brand is preferred by the tea drinking communities in China.  Their induction cookers were reliably used by many teashops in China and reviews on Kamjove products were good.  The model I had purchased is a radiant (infrared) cooker.  The 'shell' of this cooker is made from clay.  I had observed this cooker being used at a teashop in Guangzhou.  The cooker was used throughout the day and I like its ability to have controls to boil a full kettle of water but also keep the water at a very small boil as well.  It has a auto-off function after 5-10 minutes.  I personally believe that for brewing pu erh and high roasted oolongs, water temperature should be as high as possible (close to boiling) so that the aroma and taste could be fully brought out during brewing.  Information on the cooker box indicated that kettles/pots made from iron, silver, copper and glass can be used on this cooker.  This gave me more flexibility in using different kettles made from different materials.  I realised I have a small kettle collection as well (about 10 in all).

Now all I need is to season my ceramic kettle.  I was told to boil/cook a mild rice porridge in the kettle to season it.  I had been procrastinating on this procedure but hope to do it during this weekend.  Last pix show a trial run I had with this cooker.  I felt the tea 'stayed' warmer using this setup....maybe its my imagination.

I had mentioned many times in my blog that all you need is a gaiwan/teapot and 2 cups to have a good tea session.  So why did I spend moolah on this boiling water setup?  Visually, it looked good.  And....the water tasted better but ever so slightly.   The improvement is very tiny.  To me....brewing tea using a seasoned teapot or purion tea ware will also give me a tiny improvement in the taste and aroma of my tea.  All these tiny enhancements, which I perceived, are some of the 'fun things' to have in a tea session.  Yes, these add-ons are not necessary but on long weekends...... using these 'extras' does make a tea session a more interesting exercise. 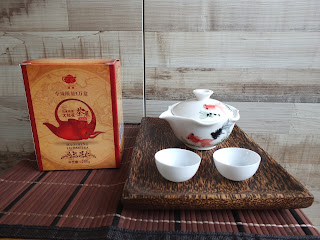 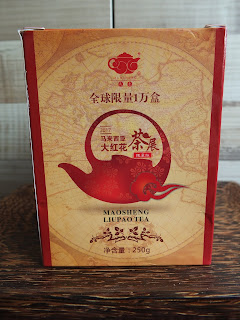 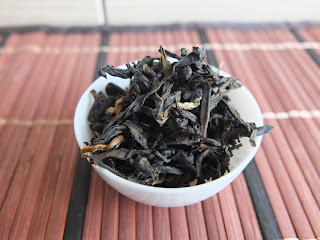 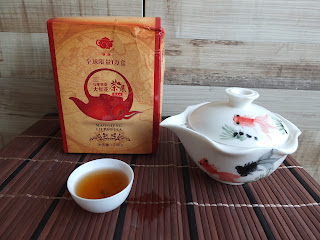 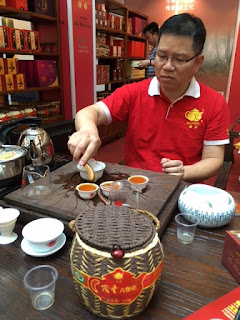 At the Malaysian Tea Expo in early June 2017, I came across a booth that promoted Maosheng Liu Bao tea.  The distributors promoted this tea by packing this tea in 250g paper boxes made specially for this tea expo and selling them at special prices to visitors of the tea expo.

How did this tea compared to my current stash of Malaysian Liu Bao tea? I  am unable to make a proper comparison.  This Maosheng Liu Bao tea was only produced this year while my current Liu Bao tea is more than 10-15 years old.  If you like traditional Chinese herbal tea (those brewed in South East Asian Chinese medicinal halls), you will like this Maosheng.  The aroma is medicinally herbal.  There were some fermentation scent in the tea but overall the tea is easy to drink.  I bought about 2 kg of this tea and intend to store the tea in a large jar.  I will revisit this tea after some time in storage.

And to James, of Teadb(link), congratulations on your marriage.  On the tea blog, James and his tea partner, Denny usually drink and review their tea on their site.  They even 'video' their tea sessions with both of them sitting side by side and having a good time with their tea.  I have a friend that is a 'fan' of these guys and she will tune in weekly for their latest episode.  James is a real hardcore tea drinker.  I believed, based on his latest post, he had a honeymoon in Japan, Taiwan and Hong Kong.  It was incredible he incorporated tea drinking sessions/meetups and tea shopping in all these 3 countries during his honeymoon. Wow.