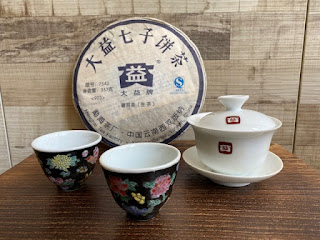 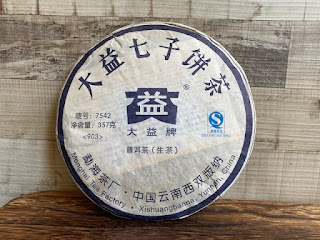 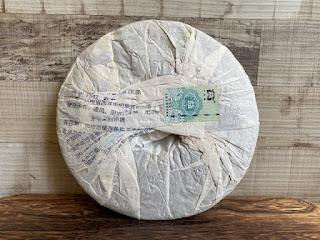 Pu erh tea drinkers including myself love numbers.  We not only enjoy buying, drinking, storing our pu erh cakes, we even name our pu erh tea by numbers.

Ask any pu drinkers to name popular pu erh tea and you will get and hear numbers like 7542, 7581, 7572, 8582 along with exotic names like Banzhang, Yiwu or brand names like Dayi and Xiaguan.

All these numbers sound so scientific.  Yes, we tea drinkers are quite smart.  If you had noticed the World Chess Championship that is going on as I write this blog, one of the players actually brought a hot flask of tea on stage to drink while he analysed the chess moves.  I bet the tea is pu erh tea.

Back to this tea.  7542 is a very popular pu erh tea.  This tea was originally produced by Taetea (aka Dayi) tea factory. This tea rose to fame when a Hong Kong tea seller found a old batch of 1988 tea in his warehouse and found that the tea had aged to a very nice drink,  That tea was nicknamed '88 Qing'. 7542 tea became famous to this day.  Today a new 7542 cake commands more than $120 per cake.

I had kept this 7542 in my personal collection for more than 10 years.  This tea brewed up strong.  Non smoky, woody, notes of dried herbs.  There are still astringent notes.  Even though the tea is already 13 years old, I felt the tea would need another 5 more years of storage.  Though the tea brew is a nice dark amber colour, I felt the tea would be even better with more age. The are still some 'roughness' and some bitterness in the tea that need to be smoothen out with more time in storage.

I had sampled many 7542 post 2014 and there is a significant difference in the tea.  Many tea drinker friends and I felt that the newer 7542 had changed.  The processing of the tea is different. The new 7542 is lighter in taste.  There are fresh floral notes in the tea.  It is more drinkable to 'drink now'.  I am personally not sure how the newer 7542 will taste when you store it away for 12-15 years.  I had also observed that the newer 7542 are a good success for Dayi tea.  They had raised the prices of the new 7542 and most of these tea had sold out. However, my tea distributor friends had also observed that the newer 7542 though sold out are never drank.  The tea had now became an investment commodity.  Investors would buy cartons of these tea, keeping these tea away in its pristine condition, unopened carton and all, and selling the tea for a profit. Any dent or damaged to the unopened carton would meant a lower price for that particular tea.

It is unfortunate that many new tea now are expensive and many buyers treat the tea as an investment.  For tea drinkers like myself, tea should be enjoyed and be drunk.  Chinese tea is more than just tea bags and bubble tea.